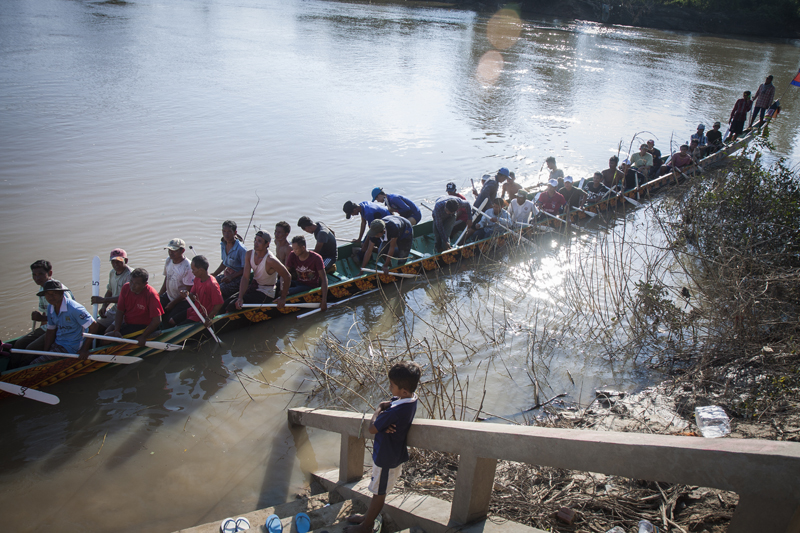 “They must come back no later than 9:00 p.m.,” said Uong Cheb, a lay priest and deputy director of the pagoda committee backing the boat. “They must practice in the morning.”

Every day for the past two weeks, the men have gathered at 2 p.m. and climbed into their long, ornately painted pirogue, pushing off into the Prek Thnort River—always trying to move faster than the day before.

“Don’t slow down, even if you’re almost at the finish line,” Mr. Cheb urged the rowers before they entered the water on Wednesday afternoon for a three-hour practice session.

“This is very important,” he said. “It’s all about speed.”

The rowers and their supporters at the Chamkar Khsach pagoda are getting ready for Phnom Penh’s famed Bon Om Tuok—an annual tradition that, for various reasons, has been held only once in the past five years, and was canceled last year due to low water levels.

The regatta is set to run from Sunday through Tuesday and will feature 14,630 racers competing in 259 teams, including 76 elite teams and three all-female teams, according to a pre-race report put out by the National Police.

Mr. Cheb’s final instruction to the men was to make sure they showed up for Thursday’s boat blessing ceremony, a spiritual send-off before the men left Meuntra village in Phnom Penh’s Dangkao district and made their way to the center of the city about half an hour away.

Rin Phan, the team’s 53-year-old coach, said he’s confident in the crew’s chances of winning their division, adding that there was heightened enthusiasm surrounding this year’s races.

“It’s more exciting than the previous years,” he said. “There has been more preparation, and I’m hopeful that we are going to win.”

Mr. Phan carried his excitement to the water’s edge, giving a brief pep talk to his crew as they began their daily practice.

As with many of the boats competing over the weekend, the Chumteav Srey Mao crew has a high-profile supporter. Lim Kean Hor, the minister of water resources, who donated five million riel, or about $1,250, to the team.

“We are pleased with this donation,” said Chhoeun Chhuk, the pagoda’s chief monk, noting that the money was used to repair the older of the team’s two pirogues, which would enter its first race on Sunday.

Prime Minister Hun Sen and one of his top deputies, Sok An, have a long-running rivalry on the river, and regularly back multiple boats that compete for the top prize in the elite division, with muscle-bound crews that row in perfect unison.

The Chumteav Srey Mao crew has some veterans—the most experienced rowers have four years of races under their belts—along with some novices.

Siv Vitha, 25, is one of the newbies, but he hasn’t let his rookie status diminish his confidence.

“I think we have an 80 percent chance of winning,” Mr. Vitha said with an air of optimism. 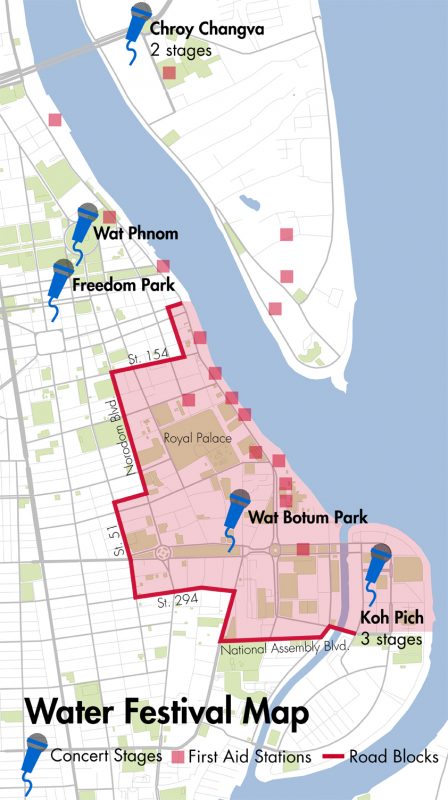 Boat races: Set up camp on Phnom Penh’s riverside and soak up the enthusiasm of 259 teams competing in this year’s traditional boat races. Starting in the late morning from Sunday through Tuesday, 14,630 racers—color-coordinated to match their teammates—will compete in a series of heats leading up to final races on Tuesday to determine the 2016 Water Festival champions. When the boat races finish each evening, stick around until nightfall, when illuminated floats, fireworks and a Monday night “supermoon” light up the waterway.

Concerts: A line-up of the country’s hottest pop stars will grace nine Phnom Penh stages over the weekend. From concerts in Chroy Changva to Wat Botum Park and Koh Pich, join the crowd and let electrifying tunes keep you on your feet and moving to the beat.

Vendors: Fried tarantulas, dried squid, balut eggs, noodle soup, meatballs, iced coffee, sugar palm juice, soda, beer and skewers of chicken, pork, beef and frog. Festival-goers will find every kind of Cambodian street food and beverage their hearts desire. If the treat on your mind isn’t visible among the vendors in the crowd, head to Wat Botum Park, where it is sure to be available among a slew of stationary carts.

Street closures: Put on your walking shoes, leave your motorbikes at home and plot out the best route to the festivities. Getting around on foot is the only option once you enter festival grounds, with streets blocked off from National Assembly Boulevard to Street 130—just south of Wat Phnom—and heading west to Independence Monument.

Pocket protection: Most of the festival is either free or cheap, but it can get really expensive if you make the mistake of carrying valuables into the crowds. Bring only the bare necessities, and hold on tight to what you have, as pick-pockets and bag-snatchers are known to roam the packed streets.

Correction: A previous version of the Water Festival guide said the boat races begin in the afternoon each day.