The novel “Return to Clay” starts with a familiar scenario for couples moving to a faraway land.

Raymonde, a French woman whose husband, Claude, is being transferred to Cambodia has no intention of leaving their upper-class Paris neighborhood for an unknown land in which she has no interest.

Claude refuses to leave her behind, however, and Raymonde reluctantly agrees to follow, determined to find fault in everything and everyone in Phnom Penh. She drives away her Cambodian domestic staff with her constant criticism and creates a poisonous atmosphere at home that pulls the couple apart.

When he takes a Cambodian mistress, Raymonde returns to France. This leaves Claude free to sever links with his Western friends and plunge into a Cambodian milieu about which he grasps little beyond his romantic imaginings.

Released in English for the first time last year, the novel by George Groslier—the Frenchman who established Cambodia’s National Museum—was first published in Paris in 1928.

The reactions of the two characters to a strange new land and culture are still being experienced by expatriates today, said Francois Dore, an expert on Indochina’s French-language literature who has a 12,000-book collection at his library-cum-bookstore, Librairie du Siam, in Bangkok.

“This is what makes this such a present-day novel,” he said. “There is the discovery of a country, the shock of a culture one does not grasp with its food, climate and a daily life in which everything conspires to take one aback.”

Expats in Cambodia have “two possible reactions,” Mr. Dore said: either a rejection and inability to grasp the new country, which leads to disappointing experiences, or amazement, enthusiasm and a readiness to embrace their surroundings.

“But then: Beware of the dangers that await the foolish one who goes too far in his naive admiration,” Mr. Dore said. “His downfall will be the more harsh when the ‘decivilized’ opens his eyes and is confronted with a reality devoid of any misleading exoticism.”

Whether today or a century ago, foreigners who leave behind their own roots to plunge into Cambodian society often have a rude awakening when they start comprehending the country’s unwritten codes and complex workings.

In the book, Claude has yet to grasp this. Mesmerized by the beauty of the Cambodian landscape and enchanted with the home created by Kamlang, his Cambodian mistress, he is unaware that the vendors who cross his path pay her a commission whenever he purchases a gift for her, or that she had been spying on his wife and household through friends, chauffeurs or passersby.

While Claude continues to work for his French company, he progressively removes himself from the French community and goes about reinventing his way of life, living with Kamlang in a traditional house on stilts in a Cambodian neighborhood even though she dreams of everything Western.

“In withdrawing from that other world he had undertaken a ceaseless activity that spurred him to seize the hours, minute by minute,” the book says. “He no longer sought to fill time but to extract all that it contained…. To see a hundred lands in the span of a human life was nothing but illusion and vain displacement. It seemed better to Claude not to stir from a single spot, to know that spot tree by tree, hour by hour, with one’s body at liberty and all notion of time abolished.”

Claude had at first been attracted to a French woman who had flawlessly adapted to Cambodia. But she was the wife of a friend and, by the time she was divorced, he was too committed to his life with Kamlang to leave her.

His world at home was, of course, carefully orchestrated by Kamlang, who even finds a young woman to serve as his second mistress, and both women attend to his every need. As the novel explains, it was common at the time for a man’s first wife to rule over and even select a second wife for the household.

Mr. Groslier knows Cambodia “inside out,” Mr. Dore said. “It’s his country. But he also has before his eyes the daily sight of the small colonial community to which he belongs.”

In 1887, Mr. Groslier became one of the first children born to French parents in Cambodia. After studying art in France and serving in the French army during World War I, he returned to build and establish the National Museum and founded the Ecole des Arts Cambodgiens, a Cambodian art school next to the museum that would become the Royal University of Fine Arts.

Suspected of complicity in the resistance during World War II, he would die while being interrogated during the Japanese occupation of Cambodia in 1945.

“Return to Clay,” which was first released under the French title “Le retour a l’argile,” was translated in English through a U.S. National Endowment for the Arts grant, and published by DatASIA Press in the U.S. in an edition that includes both the English version and the original French text.

“It’s a remarkable novel both in terms of style and substance,” Mr. Dore said. “Formwise, Groslier is a great writer, his style fresh and direct.”

The book received the colonial literature award Grand Prix de Litterature Coloniale in France in 1931, a prize given to writers with acute knowledge of the countries they depicted. The novel was released as the country was preparing to hold the 1931 Colonial Exhibition, which featured a replica of the Angkor Wat monument built to scale.

Marking the heights of France’s colonial empire, the exhibition on the outskirts of Paris, which would attract more than 8 million visitors, also signaled the start of its decline, as the country failed to maintain its global dominance after World War II.

Mr. Groslier’s legacy, however, would endure at the National Museum and also at Angkor. His son Bernard Philippe Groslier would conduct research and oversee monument restoration in Angkor park throughout the 1960s, leaving only when the Khmer Rouge began to take hold of Siem Reap province in the early 1970s.

Mr. Groslier, who also wrote non-fiction works on Cambodia, finished “Return to Clay” on June 13, 1928 — 88 years ago. His first novel “La Route du plus fort,” which was published in 1926, will be released for the first time in English later this year under the title “The Road of the Strong,” said DatASIA publisher Kent Davis.

“This first novel…focused on first-person experience of colonial life,” he said. “I have been very keen to see how a man this connected to Khmer culture would approach these topics in his first two fictional works.” 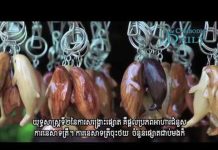