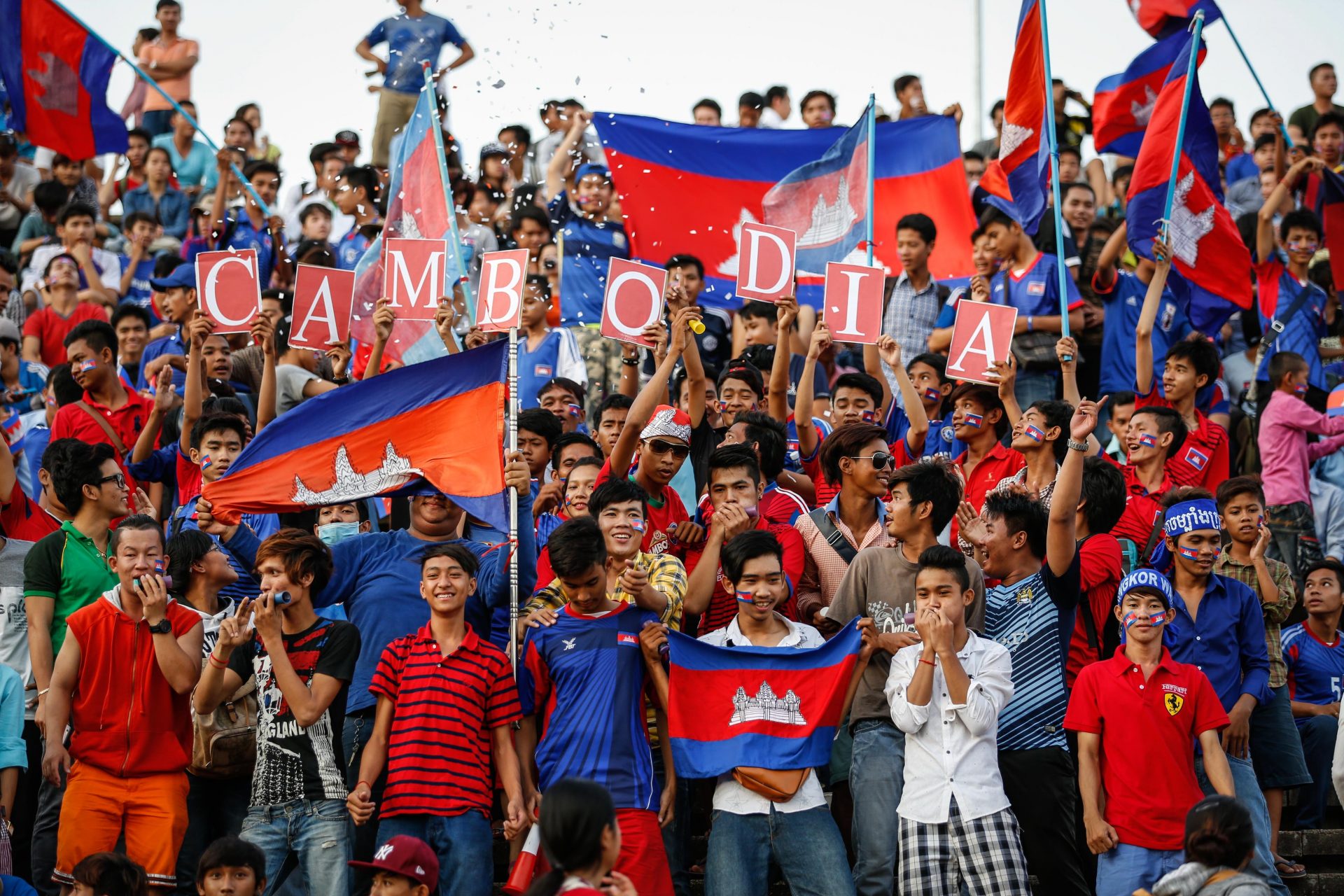 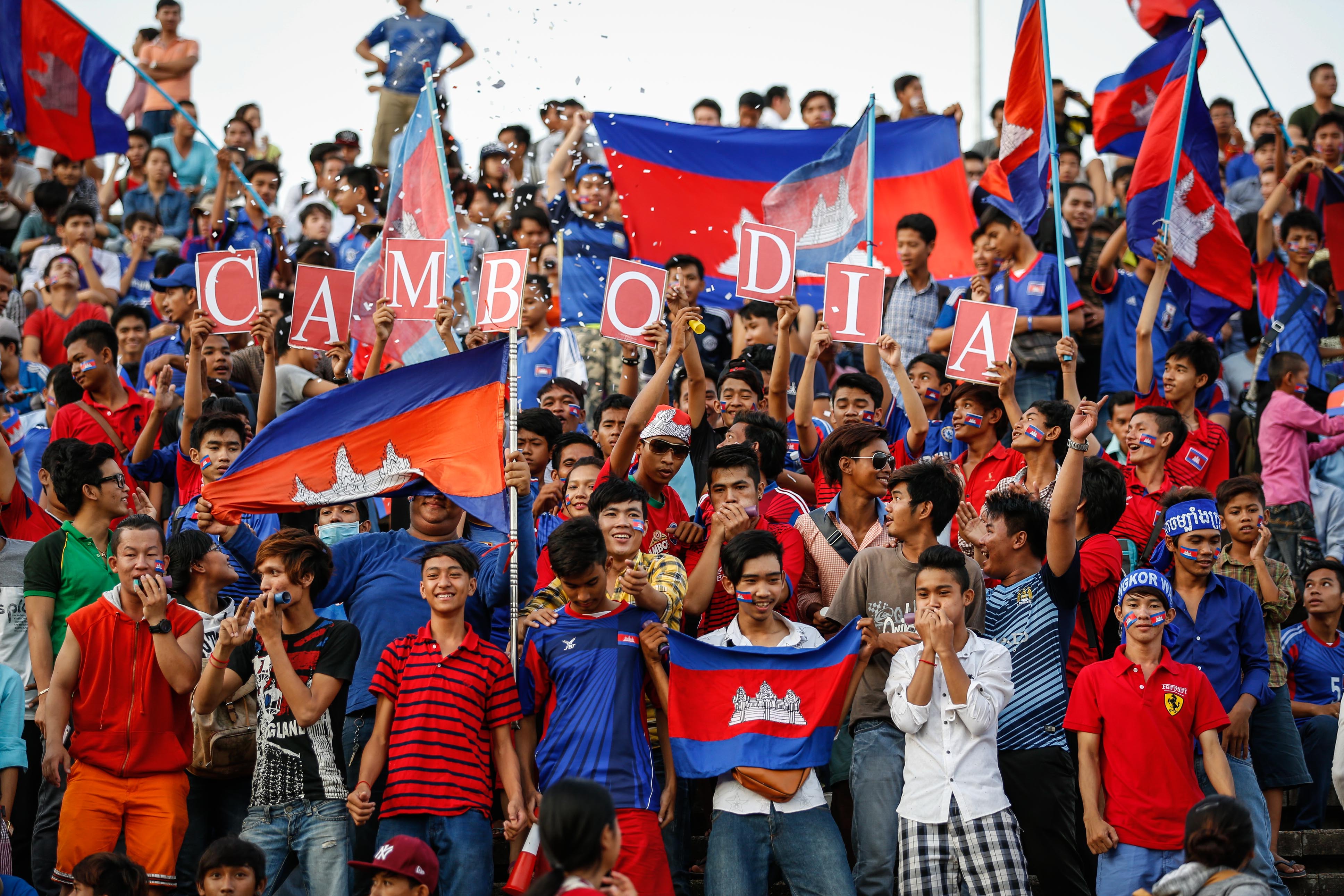 During his first three decades in power, sports couldn’t have been further down the pecking order on Prime Minister Hun Sen’s list of priorities. Funding was woefully low, facilities were crumbling and major national events rarely attracted more than a scattering of support.

International sporting successes, which were rare, would mostly go unnoticed.

After Ke Leng won the petanque world championship in 2013, the 46-year-old returned to Cambodia without fanfare. Two years later, however, when she accomplished the same feat, she received a hero’s welcome, a military promotion and $40,000—$10,000 of which was a personal gift from the prime minister.

The days when the ruling party would let the country’s sporting achievements enter the annals of history without playing them up as proof of Cambodia’s emergence as a global competitor are gone. Sports have quickly become a favorite tool of a leadership looking to project a modern and friendlier face.

Take football. Until 2014, Cambodian national football garnered little attention outside of a few hundred fans who would pay 500 riel, or about $0.12, to watch matches at Olympic Stadium. Much changed in a year, when the 60,000-seat stadium sold out as Cambodia reached the World Cup qualifiers for the first time in 2015, and Mr. Hun Sen started streaming matches live on his Facebook page. 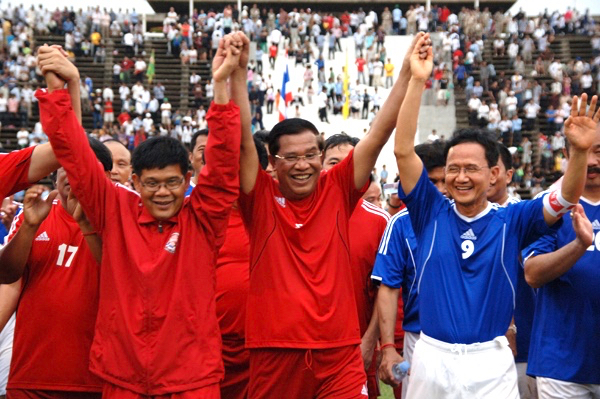 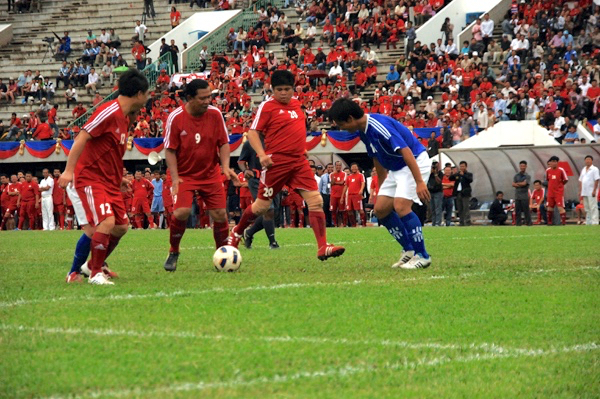 Where young fans once strictly wore European club jerseys when having a weekend kickabout, now they’re as likely to don a shirt emblazoned with the name of Cambodian fan-favorite Chan Vathanaka—a star striker who recently joined Japanese club Fujieda MYFC on loan—as they are Cristiano Ronaldo.

The first National Games last year were heralded by Mr. Hun Sen as a historic achievement, with athletes from every corner of the country invited to two weeks of tournaments in Phnom Penh. The games kicked off with a nationalistic opening ceremony celebrating the country’s soldiers as much as its athletes.

Whether it was paratroopers—one of whom ended up floating into stands packed with spectators—dropping from a helicopter while holding the national flag or military drills involving hundreds of soldiers brandishing knives, it was clear that it wasn’t about fun and games.

“This is also a political message to clarify and show the peace and stability of our nation,” Mr. Hun Sen said from a balcony overlooking the stadium. “There is no individual or group that can capture Cambodia as a hostage.”

Days later, Education Minister Hang Chuon Naron held a highly orchestrated taekwondo tutorial, in which the bespectacled official punched and kicked targets to pieces in front of a gym packed with cheering onlookers and local media.

The annual National Games are meant to prepare the country and its athletes for the SEA Games in 2023, which will likely be the largest sports competition ever held in Cambodia. A massive new sporting complex is under construction for the event, not far from a multimillion-dollar memorial being built to preserve the legacy of Mr. Hun Sen’s “win-win” policy. 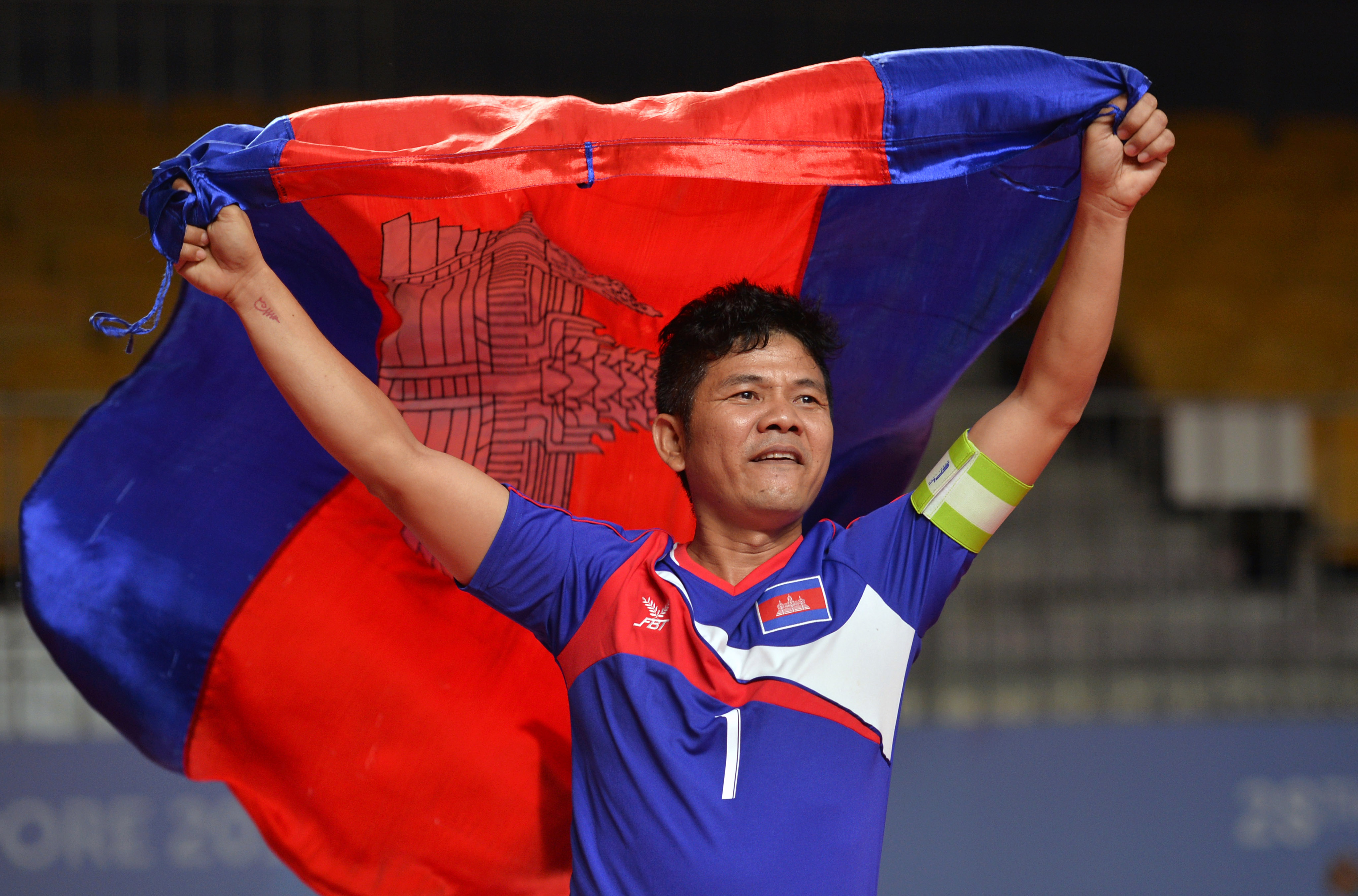 An avid football and boxing fan, Mr. Hun Sen last week was awarded the International Olympic Committee’s “President’s Trophy,” which he labeled as a proud day for himself, the country’s athletes and the nation as a whole.

“This is another proud moment for me, my wife, my family, the National Olympic Committee of Cambodia, athletes as well as all Cambodian people,” he said at a ceremony at his Peace Palace.

Whether there is any relationship between Cambodia’s sporting success under the CPP and the popularity of the politicians who have long ruled the country is yet to be seen. But if one looks around the region, there is no shortage of inspiration.

“Hosting big sporting events can give incumbents some political payoffs. It can stimulate local economic activity and show off the government’s organizational capacity and spending power, as China did to great effect in the 2008 Olympic games and 2010 Shanghai expo,” he said in an email.

“But big spectacles can also cut the other way,” he added. “Organizational stumbles or security incidents can leave the government looking weak rather than strong, and lavish spending can draw fire from citizens who see their real priorities underfunded.”

Simon Creak, a historian of modern Southeast Asia at Melbourne University, said Cambodia’s closer neighbors also offered lessons in sports being used to whip up nationalist sentiment among the masses.

“I think the increased interest of the government in sport must be related to 2023 SEA Games scheduled for Cambodia. Besides Timor Leste, Cambodia is the only country not to have hosted the games so the CPP will represent this as an important national milestone achieved under its watch,” Mr. Creak said in an email. For that to happen, of course, the CPP will also need to stay in power after next year’s national election.

“In recent years, leaders will have watched on as countries like Vietnam (2003) and Laos (2009) have erupted in popular and authentic nationalist fervour when hosting the SEA Games for the first time,” he said. “Sport appeals to governments—especially authoritarian governments—as a cultural form that is not just uniquely popular and participatory, but strongly associated with nationalism, development, and modernity.” 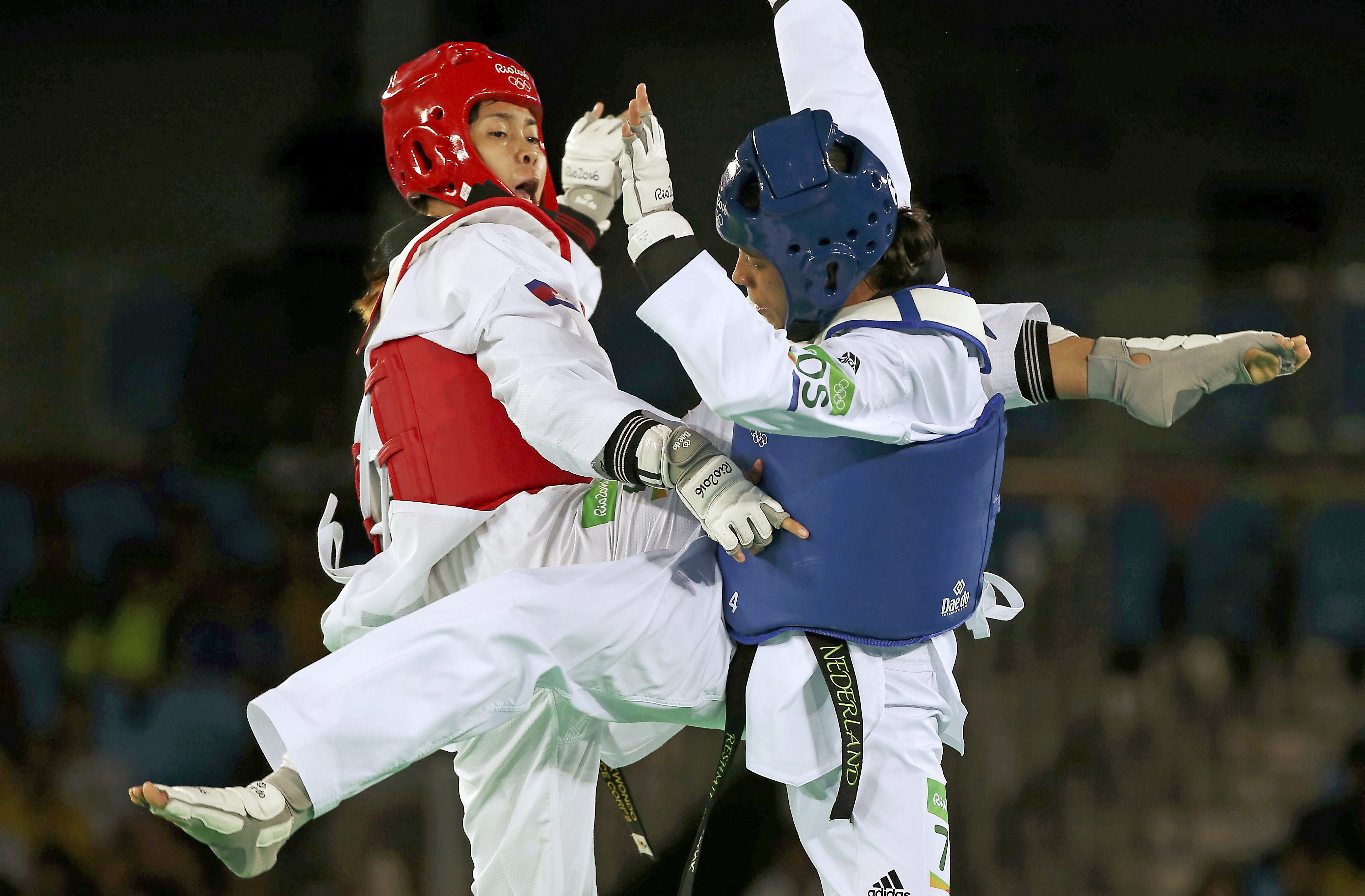 Cambodian taekwondo star Sorn Seavmey, left, fights Reshmie Oogink from the Netherlands in the preliminary round of the women’s over 67 kg competition at the Olympic Games in Rio de Janeiro in August. (Reuters)

“On a daily basis, they relished in the success of Lao athletes and the popular patriotic fervour that this whipped up, for instance in crowds chanting ‘Laos go go’ (Lao su su) and donning national colours, waving flags, and so on,” he said.

“This was unprecedented in Laos and the chant ‘Lao su su’ has stuck.”

Countries with a lack of transparency—Cambodia is considered the most corrupt in the region, according to Transparency International’s 2016 Corruption Perceptions Index—can also bury “corruption and budgetary scandals that mar sporting mega-events elsewhere,” Mr. Creak added.

Vath Chamroeun, secretary-general of the National Olympic Committee of Cambodia, said that Cambodia was making substantial attempts to develop its sporting prowess and infrastructure in the run-up to 2023, but claimed it had nothing to do with promoting the CPP.

“Cambodia will for the first time host a major sport event. We want to do something different and we want to make history,” he said.

He said the National Games would help the country prepare.

“The opening ceremony, we had to do similar to the Olympic Games. We have the mass movement. I think it’s not to promote the party, or to promote anybody, but promote Cambodia,” he said.

As for the potential drawbacks of tying the country’s image to mass sporting events, Stefan Huebner, author of “Pan-Asian Sports and the Emergence of Modern Asia, 1913-1974,” cited the example of the 2010 Commonwealth Games in India, which was rife with accusations of mismanagement and corruption.

Thailand, on the other hand, has used sporting events, including the SEA Games and the Asian Games, to show off its “organizational competence and development successes.”

Sports in Thailand have also “promoted the personality cult of the (late) king as the figurehead of the Thai nation by giving him a prominent place in the ceremonies, him blessing the games’ flame, him once winning a gold medal together with one of his daughters (promoting him as a “marvelous” sportsman) in a yachting event,” he said in an email.

If this year’s National Games were any indication, Mr. Hun Sen is positioning himself in the same role. However, Mr. Huebner said it was difficult to say to what extent sporting success and major spectacles could counteract negative sentiment.

“Generally, it is difficult to say if hosting a big sporting event sufficed to keep a government in power,” he said. “More revealing are the cases when governments lose power despite having hosted such an event, since they either tried to realize megalomaniacal plans that were not appreciated by large parts of the population or are already in such a bad situation that even this emergency plan does not offer help anymore.”