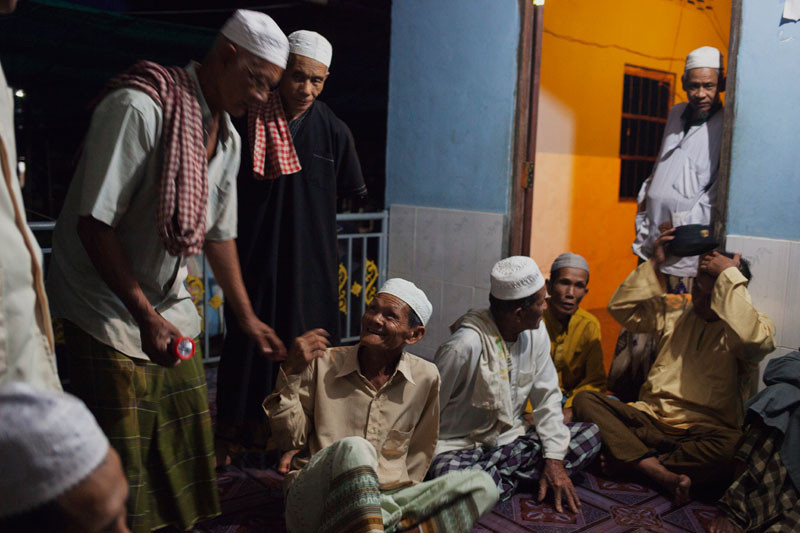 SVAY KHLEANG VILLAGE, Tbong Khmum province – This tranquil village along the Mekong River had been home to generations of Cham Muslims when it was overtaken by the Khmer Rouge in 1970. Initially, the conquering Communist guerrillas were tolerant of the villagers’ way of life, allowing them to continue worshipping at the local mosque and wearing their traditional Islamic dress, said 58-year-old village chief Slaiman Min.

“When they first came in 1970, they treated us a lot better, although they had us stop selling things,” Mr. Min recalled in an interview last week at his home on the main road that splits the village, which was originally in Kompong Cham but now sits in the country’s youngest province, Tbong Khmum. “They told us that Lon Nol had taken power from Sihanouk and they would return it to the prince.”

The relative tolerance had dissipated by 1973, however, as the Communists began curtailing religious freedoms. They forced women to uncover their heads and cut their long hair, while everyone was made to eat pork at the village’s new communal dining hall and replace their traditional dress with the dark, drab uniforms of the guerrillas. Two years later, the disappearances began.

“By 1975 our freedoms had completely stopped. If villagers still followed their religion, they’d be taken away and killed,” Mr. Min said.

“The Khmer Rouge would have secret spies to watch the mosques. When they saw somebody go there, they would come to the house, arrest them, cover their mouths and take them to the district detention office. They never came back.”

This month has seen the Khmer Rouge tribunal’s first testimony on charges that the regime’s “Brother Number Two” Nuon Chea and former head of state Khieu Samphan committed genocide against the Cham. The first week of this phase of the trial included testimony on rebellions by Cham Muslims and subsequent crackdowns by Khmer Rouge forces in Kompong Cham province in September 1975.

Armed rebellions were extremely rare during the Khmer Rouge, as the regime brutally suppressed even whispers of dissent. Despite this, there are numerous examples of uprisings by the Cham, as the regime sought not only to control the country’s Muslims, but to completely dismantle the group’s identity.

The group’s original homeland, Champa, was one of the first Hindu-Buddhist states in the region before being conquered by the Vietnamese in 1471. The largest Cham migration to Cambodia occurred in the late 1790s; most of the migrants adopted Islam, and the country’s first mosque was built in 1813, historian Ben Kiernan writes in his book “The Pol Pot Regime.”

By 1975, the Cham, who practice a form of Sunni Islam, numbered about 250,000. The relationship between Cham and Khmer communities was often close, and intermarriage was common. But Cham Muslims were widely persecuted during the Khmer Rouge regime, and more than a third of the country’s Cham had perished by 1979, Mr. Kiernan estimates.

Around the same time that the Communists began enforcing their program of oppression in Svay Khleang, similar events were unfolding in Koh Phal village, an island about 10 km downstream.

Today, years of erosion have collapsed the settlement into the waters of the Mekong. But prior to 1975, Koh Phal was home to more than 1,800 residents, according to the book “The Cham Rebellion” by Ysa Osman, a researcher and NGO director. After the Khmer Rouge regime, there was just 183.

Following the Khmer Rouge’s entrance into Koh Phal in 1973, the Cham refused to cooperate with their new rulers, which led the Communists to abandon their attempts to control the settlement, Mr. Osman writes. This period of freedom was short lived, however, as the Khmer Rouge returned and a year later began a new wave of repression.

Despite the Khmer Rouge’s efforts to coerce the Cham in Koh Phal into assimilating with Khmer culture, the locals remained defiant, according to Mr. Osman, with villagers continuing to heed the imam’s call to prayer. Khmer Rouge soldiers then killed a young Cham man and kidnapped another, later releasing him with a message informing locals that the village was to be destroyed.

After villagers ignored calls to surrender, the Khmer Rouge attacked.

“The next morning a boat came back with tens of fully armed soldiers. It put ashore east of the village. Six villagers charged the approaching Khmer Rouge squad, but all six fell to gunfire,” Mr. Osman writes. “The advancing soldiers moved on toward the village and came upon a group of ten villagers. Another clash developed. All of the defenders were killed except one.”

Over the ensuing days, local Cham attempted to fight cadre with swords and knives but were overrun as Communist soldiers bombarded the village with artillery, razing the village and killing hundreds of men, women and children.

Two weeks after the clashes in Koh Phal, on the final day of Ramadan, Cham youths in Svay Khleang obtained a list indicating the names of 80 locals the Khmer Rouge planned to arrest, said Tea Sorl Bin, 68, whose name was on the list. Increasingly exhausted by the surveillance and persecution at the hands of “Angkar,” they planned a revolt.

“The Khmer Rouge had already taken Cham and we heard information they were taking 80 more, so when we heard they were going to attempt to come and make arrests we decided to stand up,” said Mr. Sorl Bin, sitting outside the Svay Khleang mosque after Monday evening prayers last week.

The villagers gathered together and prepared swords in order to attack the heavily-armed cadre as they entered the village, he said. The beat of a large drum would signal the battle cry.

Hundreds of villagers then began charging at local Khmer Rouge with their swords, he said, but the heavily armed cadre quickly repelled the onslaught.

“They began to shoot. I saw about 10 to 20 die in front of me, but there were more. There were hundreds…they moved forward as we attacked,” he said.

No Min, who was only 16 at the time, recalled the battle and the heavy losses inflicted on the Cham, particularly as more Communist forces began entering the village via land and water.

“We just wanted to prevent the arrests. People picked up swords and began to attack the Khmer Rouge,” Mr. Min said. “Everybody was involved; even the elderly were shouting.”

“I know that one cadre was killed. I’m surprised that even one cadre died. How could we struggle with them? They were shooting, cutting throats and stabbing people,” he said.

Mr. Min then fled to the Svay Khleang mosque before briefly returning to his home. Others disposed of their swords in the banana fields surrounding the village.

In his book, Mr. Osman says the soldiers continued to massacre locals once the rebellion had been crushed and that one survivor managed to stab a soldier to death inside his house before it was burned to the ground.

The Khmer Rouge rounded the survivors together and started marching them to the west before the group was split in two—men in one group, women and children in the other—Mr. Osman said. Men wounded in battle were told they were being taken for medical treatment before being killed, while the rest were detained inside a tobacco drying warehouse.

Mr. Min said he was kept at the warehouse for a month before being transferred to nearby Peus II commune, where persecution of the Cham continued.

“When I was evacuated to live there, the Khmer Rouge intimidated us. They stopped us from speaking Cham; no communication was allowed at all. They said, ‘If you do, all your family will be killed,’” he said.

The majority of the survivors were evacuated to Dambe and Stung Trang districts, Mr. Osman writes in his book. When they reached their destinations, Cham families were mixed in with the Khmer families. Many died of malaria while toiling in the rice paddies.

In 1978, Mr. Min said he managed to flee his cooperative to join another rebellion led by a former Khmer Rouge cadre in a forest near Svay Khleang. Well armed, the 100-man unit managed to fend off attacks from local units and was eventually met by Vietnamese soldiers en route to overthrowing the Pol Pot regime, he said.

The rebellions of Svay Khleang and Koh Phal are two of the best documented Cham rebellions against the Khmer Rouge. However, in her book “The Hijab of Cambodia,” researcher Farina So cites a number of other uprisings.

The nearby village of Trea in Kompong Cham was the site of the first Cham rebellion in 1973, when a group of about a dozen young men razed the local Khmer Rouge office in retaliation against the regime for its restrictions on religion, she writes. Sweeping arrests came as a result.

In the same year, men in Kandal province’s Chroy Metrei village demonstrated against the Khmer Rouge’s order that Cham women cut their hair and remove their head scarves. However, the group managed to avoid physical confrontation.

“The head of the group, Sa Rasath, negotiated with the KR for more time for women to adapt to the new policy. The KR agreed to the proposal on condition that the people followed the policy soon,” Ms. So wrote.

A later armed uprising—which included both Cham and Khmer rebels and former Khmer Rouge spies—took place in Tuol Totoeng commune in Preah Sihanouk province in 1976. About 40 rebels divided into two groups, with the majority nestling in the mountains along National Road 4, according to Ms. So.

“Sometimes they bombed the KR in Chong Ksach and other nearby villages, and then hid again in the mountains. In response to this, the KR searched for anyone associated with the rebels, especially for their wives and relatives still living in the villages. They were to be killed,” Ms. So wrote.

After the fall of the regime, the few survivors from Svay Khleang began returning to their destroyed village. Of the roughly 6,200 people living there in 1970, only 600 lived through the regime, according to Mr. Osman. Villagers interviewed recalled returning to burned homes, little food and realization of the loss of loved ones.

Sitting outside the mosque last week, Sos Ponyamin, 61, the village’s charismatic imam, who testified about the rebellion at the Khmer Rouge tribunal earlier this month, said the uprising was about more than just the regime’s attack on Islam.

“The reason we attacked was not just for the Cham, but for Cambodia and for freedom of religion,” he said.

Previous articleKickin’ Around
Next articleThe Cycle of Rice: ‘Light Rice’