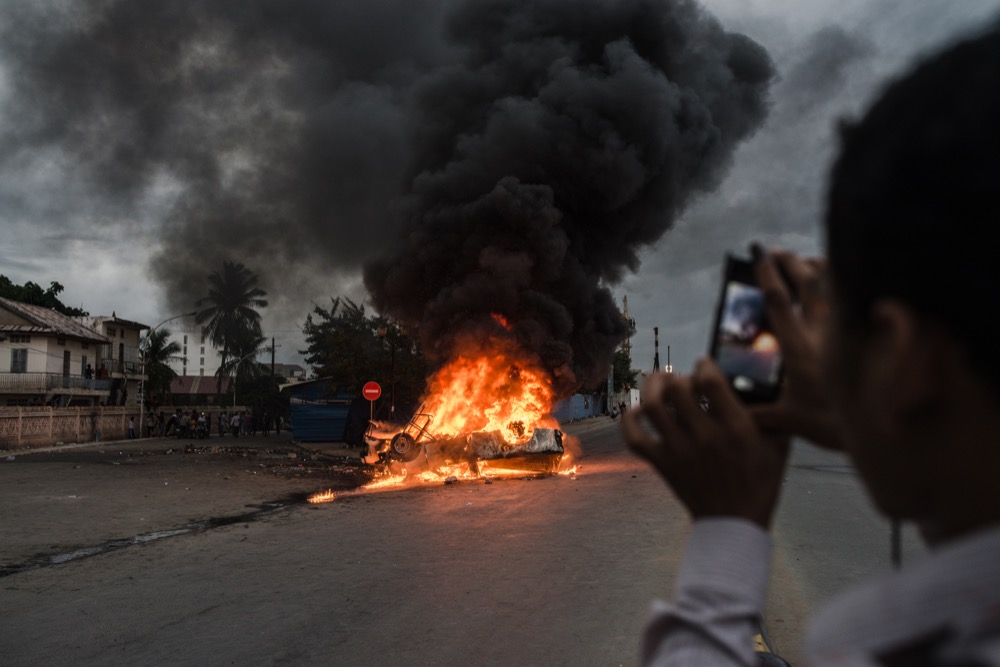 A scene from the documentary ‘A Cambodian Spring’

“Sooner or later, all the poor people will be gone and there will only be rich people left,” she says. “They don’t want people like us living in their beautiful city.”

Speaking in 2010, Ms. Srey Pov was then one of the foremost activists in the Boeng Kak community, where thousands were evicted after the lake was leased to a private developer with close ties to the government in 2007.

She is also among the protagonists in a new film, “A Cambodian Spring,” which premieres next month at Hot Docs, an international documentary festival in Toronto.

The two-hour documentary, which was nine years in the making, follows Ms. Srey Pov and then-budding Boeng Kak activist Tep Vanny as the government begins evicting families from their homes around the lake.

Made by award-winning Irish filmmaker Chris Kelly, the film also follows the grassroots activism of then-little-known monk Loun Sovath as he chronicles the plight of farmers from Siem Reap province’s Chi Kreng district, who became entangled in a violent land dispute with authorities in 2009 that resulted in police allegedly opening fire on them.

Originally planning a three-month project, Mr. Kelly serendipitously ended up documenting characters who would go on to play central roles in a peaceful protest that posed the biggest threat to the ruling CPP’s grip on power in a generation.

“I had no idea that the whole ‘Cambodian Spring’ thing was going to happen when I started filming with them. I did set out just to make a film about land rights and protesters,” Mr. Kelly said from his London home last week. 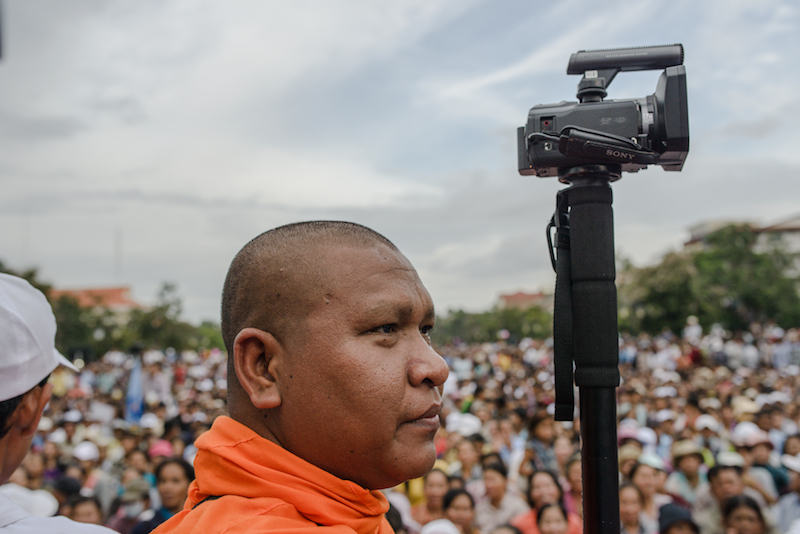 Activist monk Loun Sovath, in a still from ‘A Cambodian Spring.’

“A Cambodian Spring” blends stunning shots of the lake’s last days—the illuminated Council of Ministers building looming in the background—with dramatic footage of the evictions, including an opposition activist being heavily beaten by authorities during a demolition.

It intertwines grainy, handheld video footage taken by Loun Sovath and the Chi Kreng farmers as they fight for the release of residents who were charged with attempted murder for their alleged involvement in the dispute. No officials have been charged over the shooting that injured four farmers.

Footage captures then-opposition leader Sam Rainsy returning to Phnom Penh to mass hysteria among his supporters in time for the last general election in 2013, violent demonstrations over never-proven accusations of Vietnamese nationals illegally casting votes, and the mass protests urging Prime Minister Hun Sen to step down in the light of the disputed results. The film portrays well the drama of mid-2013.

Few could imagine the ruling party allowing such gatherings today, especially after the protests stopped dead after the military police fired on demonstrators in January 2014. Mr. Kelly was there on the front line.

Arguably the most comprehensive depiction of the period, the film recalls the wave of discontent and thirst for change that appeared to be sweeping the country almost four years ago.

Throughout the film, however, the wider political climate almost plays as a backdrop to the personal toll the activism takes on Loun Sovath and the Boeng Kak community, which begins to splinter amid accusations that prominent activists were bought off by the government.

As Loun Sovath increasingly draws the ire of the powerful, government-aligned clergy who harass the monk in an effort to silence him, the film also gives a gripping insight into the divisions within the Boeng Kak movement, which in one scene point breaks into violence as rocks are thrown during a dispute.

At the heart of the film is the sometimes fractious relationship between Ms. Srey Pov and her protegee, Ms. Vanny, two women standing up for their beliefs who start off united, but succumb to the pressures of activism. Despite sticking together during the initial splits, Ms. Srey Pov and Ms. Vanny’s friendship comes under strain later in the film amid accusations that they were selling out and spreading lies about one another.

The breakdown of their relationship seems to embody the fracturing activist movement they are part of.

“It evolved into a film about activism, and what happens to activists [amid] that tension between your public lives and your personal foibles,” Mr. Kelly said. 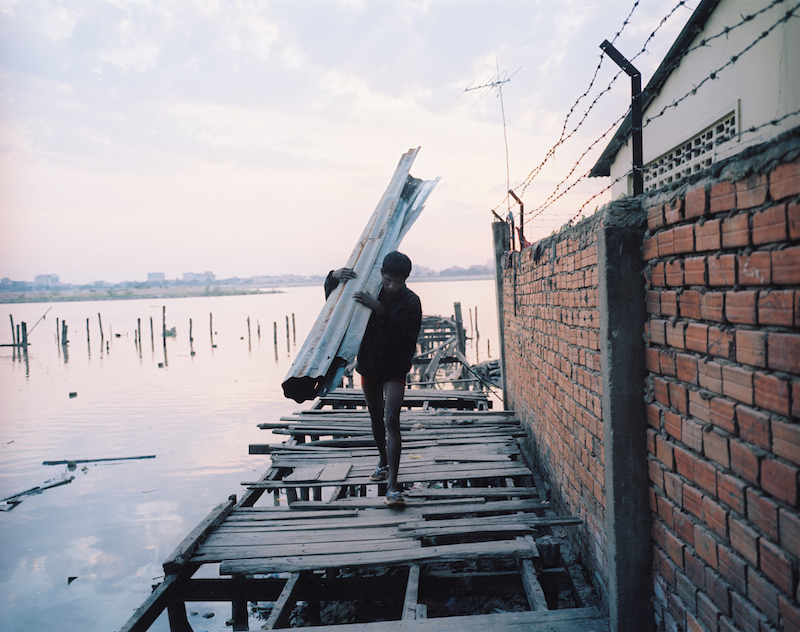 A laborer carries sheet metal along a boardwalk on the shore of the Beong Kak Lake before the lake was filled in by a private developer, in a scene from the documentary.

“The envy, the jealousies, the desires that humans have—pit that against the activist movement, protest movement when you’re fighting corruption,” he said.

With this in mind, Mr. Kelly tried to avoid creating a simple narrative of “heroes and villains.”

“That’s the whole point of the film—it’s ambiguous. There’s no simple narratives in life. We run around in life trying to find narratives—good versus evil, black and white. It doesn’t really work like that. People have good in them and bad in them,” he said.

“People do bad things for good reasons and they make difficult choices.”

Ms. Srey Pov and Ms. Vanny—the former of whom has since stepped away from the movement, while the latter is currently jailed for her activism on charges widely thought to be politically motivated—are prime examples of this dichotomy, he said.

“It’s not really clear how good or bad Srey Pov or Vanny are. Vanny is a bit of an egoist, but she’s sitting in jail now for what she believes in,” he said, adding that he had “never really made his mind up” on Ms. Srey Pov.

After filming for more than half a decade, Mr. Kelly decided he finally needed to finish the project, despite still feeling there was unfinished business.

“It never really felt like it was over. Even for the monk, it’s still not over—he’s still getting death threats, he’s getting his social media accounts hacked. Tep Vanny is in jail; Rainsy’s back in exile,” he said.

In light of the ruling party’s apparent increasing paranoia and legal assault on opposition voices in the run-up to upcoming elections, “A Cambodian Spring” is an absorbing and comprehensive depiction of people who helped define a period that may have been the country’s biggest chance for change.

Due to the content of ‘A Cambodian Spring’ and efforts to shut down films critical of the government, no public screenings of the film in Cambodia have yet been announced.