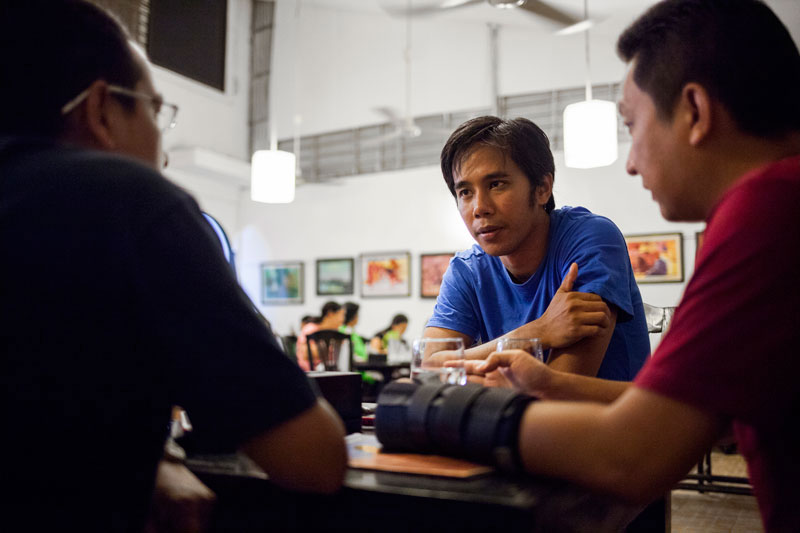 The hapless Mighty Mekong Football Club, a team of Phnom Penh-based Burmese expatriates and their friends, generally has poor luck on the pitch.

“What I can say is we lose, mostly,” said 39-year-old Htun Nay Myint, his finger in a splint following an unsuccessful stint as goalkeeper.

“After we won the election, we beat the U.S. Embassy team,” boasted Myint Thu, a Burmese businessman, sitting inside the Irrawaddi Myanmar Gallery Restaurant on a recent afternoon, sipping a cup of tea in the company of several other Burmese men who use the restaurant as a gathering place.

Phnom Penh’s small Burmese population is used to riding out tough times. They have seen uprisings in their home country swell and crumble, relatives jailed and beaten, and an economy deteriorate into farce.

The NLD election victory was a rare bright spot, a sign that Burma is becoming more politically open and, they hope, democratic. Still, few of the approximately 300 Burmese expats here are planning to pack their bags and return to Rangoon. History has given them many reasons for caution. And besides, Cambodia has become a home for many of them.

When 33-year-old Naing Oo arrived in Phnom Penh nine years ago to take up a position teaching science to primary school students, he had little idea what to expect.

“Nobody knows about Cambodia,” he said.

Like many of his peers, Mr. Naing Oo was drawn to Cambodia because of the job opportunities mostly unavailable in Burma, which was ruled by a repressive military junta from 1962 to 2010.

He left a country with daily, half-day electrical outages, myopic leadership by superstitious generals, and a totalitarian intolerance for political expression—a country where a secondary school poem drew the ire of a classroom spy and earned him an interrogation by the teacher. Measured by that yardstick, Cambodia seemed modern, free and safe.

Mr. Naing Oo followed his sister-in-law and wife to Phnom Penh, lured by higher teaching salaries. The city was sleepy compared to Rangoon, but he was surprised to find that “everything is easy to get, and cheaper here,” he said. A SIM card that sold for $3,000 on the black market in Rangoon was $5 in Phnom Penh.

Htun Nay Myint, who now works as a finance manager at a power plant in Phnom Penh, used to work in a similar capacity for a Thai company’s Rangoon office. “Every time I have to pay, I have to put [kyat] in a bag,” he recalled.

For Cho Cho Myaing, the 56-year-old owner of the Irrawaddi restaurant and a leader of the Burmese community here, the struggles cut deeper.

Her eldest brother, Myint Thein, joined student activists in 1962 to protest restrictions put in place by General Ne Win after he came to power in a coup that year. Ms. Cho Cho Myaing says her brother was repeatedly swept up by police raids targeting student protests and other uprisings that punctured the following decades.

“The government is always checking him out, following him around,” she remembered.

During a prison stint between 1996 and 1998, she said, police “hit him with a stick,” causing serious brain trauma. After his release, he suffered from headaches and fell down repeatedly. Ms. Cho Cho Myaing and her family believe the lingering effects of the beatings ultimately led to his death in 2010.

Ms. Cho Cho Myaing herself has an activist streak that began with the “8888” uprising of 1988. The movement—sparked by ruling General Ne Win’s decision to void all kyat notes that were not divisible by the lucky number 9—galvanized students across the country, who saw their cash savings disappear overnight.

Ms. Cho Cho Myaing graduated from Rangoon University four years before the uprising, but participated in the sit-ins and protests that marked the movement. When the military responded with killings and detentions, she fled to Rangoon’s outskirts before escaping to Singapore in 1990 to continue her studies.

It was a job offer as a financial officer at NagaWorld casino that landed Ms. Cho Cho Myaing in Phnom Penh, and, after a period of soul-searching for more meaningful work, a position with the Dutch aid fund ZOA that kept her here.

When Ms. Cho Cho Myaing opened Irrawaddi in 2006, she began making monthly pilgrimages back to Burma to stock up on spices. During a visit in 2007, she encountered tens of thousands of monks, students and other activists protesting as part of what came to be known as the Saffron Revolution.

“The scene makes me feel, ‘OK, I need to do something,’” she recalled.

Back in Phnom Penh later that year, Ms. Cho Cho Myaing joined protesters outside the Burmese Embassy and redecorated her restaurant with posters promoting the NLD and Ms. Suu Kyi. Though she feared repercussions for her business, she said, even the embassy staff became customers.

“They need Burmese spices,” she joked.

Beginning in 2011, the Burmese government relaxed its grip on the economy, released Ms. Suu Kyi from house arrest, and initiated a series of reforms that culminated in the NLD’s sweeping victory in the November 8 general elections.

Ms. Cho Cho Myaing voted in Phnom Penh, but returned to Burma to witness the election firsthand. She followed her siblings to the silent queues, and later, joined the rapturous crowds celebrating outside NLD headquarters.

Though Cambodian opposition leader Sam Rainsy has drawn parallels between his CNRP and Ms. Suu Kyi’s NLD after the latter party’s victory, few of the Burmese in Phnom Penh feel that such comparisons are apt.

“They have their own struggle; we have our own struggles,” Mr. Naing Oo said. “We opposed our government in so many different ways—peacefully, covertly.” As a teacher in Cambodia, he said, it seemed as if “students are interested in other things.”

Even if the political climate in Burma stabilizes, Mr. Naing Oo and his countrymen are wary of giving up their lives in Phnom Penh to return home. After years abroad, the men say they now feel like guests in Rangoon.

“I can’t catch up” after nine years away, Mr. Naing Oo said, explaining that Burmese there see him as an outsider. “It’s because of the way we speak—we become more polite,” he laughed.

Like other expats, they are also attracted to Phnom Penh’s low cost of living. Here, the men are able to afford furnished apartments and host dinner parties for other Burmese families.

Burgeoning foreign investment and economic growth in Burma, however, give them hope that they will eventually be able to return without sacrificing the lifestyles to which they have become accustomed.

Ms. Cho Cho Myaing, too, said that after 20 years in Phnom Penh—first working at NagaWorld casino, then at an NGO, and now at her restaurant—she can wait a few years to see whether promised reforms play out.

She will keep the NLD posters in her restaurant on the wall for another few months, she said with a cautious smile. “I want to keep it until the success is confirmed.”