The Cambodia DailyAll the news without fear or favor
HomeFeatures

Given the turbulence and shifting ideologies of the past two decades in Cambodian politics, understanding the myriad forces that have shaped the country today was a daunting task for Astrid Noren-Nilsson.

As the Swedish political scientist points out in the introduction of her new book “Cambodia’s Second Kingdom,” a great deal has changed since war-weary opponents agreed to a democratic election in 1993.

But what emerges from her study, which took more than a decade to complete, is that, after all these years, two leading political parties are still pitted against each other—with competing notions of Cambodia and its future.

For Ms. Noren-Nilsson, vice president of the Cambodian Institute for Strategic Studies in Phnom Penh, a deep exploration for her book about the last 20 years of governance meant analyzing the people behind the politics.

“At the outset, I was curious about the discrepancy between decades of firm, relentless, sometimes fanatical political beliefs in Cambodia, and the present era, which seemed defined by opportunism,” she said in an interview last month. “I was curious to see what, if anything, happened to the ideological legacies of preceding decades.”

As she quickly learned, examining this complex subject entailed deviating from the political scientist’s usual method of analysis. “I soon discarded the lofty notion of ‘ideology’ as I realized a more fruitful perspective was about the different ways in which political actors related to the nation.”

“It became evident that I needed to take a much broader, historically informed view, to look at the positioning of political figures versus different historically inherited—and new—ideas about the nation,” she said. “These were linked to notions of democracy, just leadership, kingship, etc. So my investigation turned to these areas.” 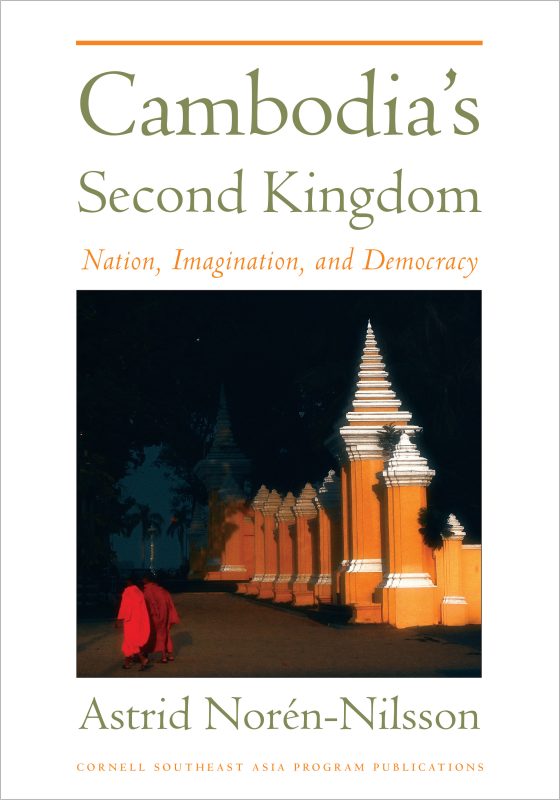 Ms. Noren-Nilsson has spent nearly 15 years researching politics and politicians in Cambodia and recently completed her doctorate at the University of Cambridge, England. She turned her thesis into the book, which was released in the U.S. in July by Cornell University’s Southeast Asia Program Publications.

“Cambodia’s Second Kingdom: Nation, Imagination, and Democracy” examines what the author describes as the second era since the country declared independence from France in 1953. The first kingdom, she said, was the regime headed by then-Prince Norodom Sihanouk in the 1950s and 1960s.

The second kingdom began to take shape with the signing of the Paris Peace Agreements in 1991 by political factions that had been at war since the Vietnamese army, accompanied by a Cambodian contingent, ousted the Khmer Rouge in 1979. They installed a political party that would become the ruling CPP.

As part of the 1991 agreement, the U.N. oversaw a national election in 1993, after which a Constitution was adopted by the newly formed National Assembly and King Sihanouk was crowned as the constitutional monarch and nominal head of state.

The royalist Funcinpec party won the 1993 election, but CPP leaders refused to step down and a power-sharing government was formed with current Prime Minister Hun Sen as second prime minister and Funcinpec leader Prince Norodom Ranarridh as first prime minister.

The experiment in joint leadership ended in armed battles between CPP and Funcinpec forces in July 1997, ousting the prince from his position and cementing Mr. Hun Sen’s power.

Since then, the CPP has invented a complex post-socialist identity for itself, which factors in a “capitalist transformation” carried out by the ruling party, Ms. Noren-Nilsson writes in her book.

This identity “serves to guarantee that the regime can maintain a separate political identity from Western liberal democracies, at the same time that it frames practices of gift-giving and patronage as central to the new economic system.”

In addition, she notes, Mr. Hun Sen has linked himself to a 16th century Khmer peasant king, Sdech Kan, using this to build his political persona. In a Buddhist country, where most people believe in past and future lives and age-old legends, symbols are paramount.

While several versions of the myth exist, the basic tale is that Sdech Kan was born a temple slave who rose up against an unjust king and went on to bring order and prosperity to the country.

“Hun Sen’s reincarnation of Sdech Kan can be understood as fundamentally a bid to embody national leadership, rather than kingship as such,” Ms. Noren-Nilsson writes. “His reincarnation as Sdech Kan powerfully delivers the message that Prime Minister Hun Sen is personally the architect of post-conflict national reconciliation, peacebuilding, and democracy in Cambodia.”

King Sihanouk’s death in 2012 provided Mr. Hun Sen with the “opportunity to intensify his claim to genuinely regal, or superior to regal, status in the kingdom, without facing the muted counterpoint to such claims that Sihanouk’s mere presence on the planet still offered during his final years,” she adds.

Unlike his father, who assumed the role of mediator to help resolve political conflicts in the 1990s, King Norodom Sihamoni has avoided stepping into the fray, Ms. Noren-Nilsson writes.

It seems paradoxical that King Sihamoni “should refuse a mediating role at a time when the nation appeared more divided than ever since reunification, and when the display of popular allegiance to the monarchy after Sihanouk’s death has made its abolition—previously threatened by the CPP—a political impossibility,” Ms. Noren-Nilsson writes.

King Sihamoni and the Queen Mother Norodom Monineath seem to support the ruling party “out of a genuine conviction that only the CPP can act as guardian of the monarchy,” she says.

On the sidelines, the challenge for Funcinpec as a royalist party has been to become a political force beyond identifying with the monarchy. But the party has so far failed to do so, Ms. Noren-Nilsson writes, adding that “Cambodian royalism is now in its death throes.”

Over the past 20 years, Funcinpec has been torn apart by leadership crises, internal disputes and defections. “In the multiparty liberal democratic state with a constitutional monarchy, Cambodian royalists had to deal with a series of tensions in drawing on regal legitimacy,” she writes.

One difficulty was that Funcinpec officials were from diverse political factions, some of them having supported King Sihanouk’s ousting in 1970 and others unable to forget that he had allied himself with the Khmer Rouge once out of power, Ms. Noren-Nilsson notes.

As for the opposition CNRP—created when the Sam Rainsy Party joined forces with Kem Sokha’s Human Rights Party in 2012—the 44.46 percent of the votes it received in the 2013 national election was a rude awakening for the CPP, she writes.

Following the CNRP’s demand for fundamental reform of the National Election Committee and its lawmakers’ refusal to take their seats at the National Assembly, Mr. Hun Sen and CNRP President Sam Rainsy agreed in 2014 to establish a “culture of dialogue.” The CNRP was to stop using expressions such as “communist dictator” or “Vietnamese puppet,” insults often directed at Mr. Hun Sen, and the CPP was to stop threatening CNRP members with arrest and imprisonment.

The truce did not last. Today, Mr. Rainsy is living in France to avoid arrest and imprisonment while his deputy, Mr. Sokha, is set to go on trial this month and under self-imposed house arrest at the party’s Phnom Penh headquarters.

Just as Funcinpec has struggled to justify its existence, the CNRP has had to clarify its stance. “Democrats have been susceptible to appearing as a protest movement without a national agenda,” Ms. Noren-Nilsson writes.

“Identifying the will of the people has been difficult, given the democrat leaders’ elite and transnational backgrounds, and lack of everyday closeness that the CPP-dominated local state enjoys,” she writes.

The CNRP does not have the CPP’s countrywide patronage network built over three decades. Moreover, Mr. Rainsy lived abroad for nearly 30 years before returning to Cambodia in 1992.

As respected U.S. historian David Chandler notes in the foreword of “Cambodia’s Second Kingdom,” the book was written by an author who, in contrast to many of her contemporaries, spent a significant amount of time listening to the political players whose actions and policies she has analyzed—including an interview with Mr. Hun Sen.

The result, he writes, is “a fresh and clear-headed interpretation of Cambodian politics that might surprise some ‘experts’ but would be recognizable to Cambodian practitioners.”