The Cambodia DailyAll the news without fear or favor
HomeFeatures 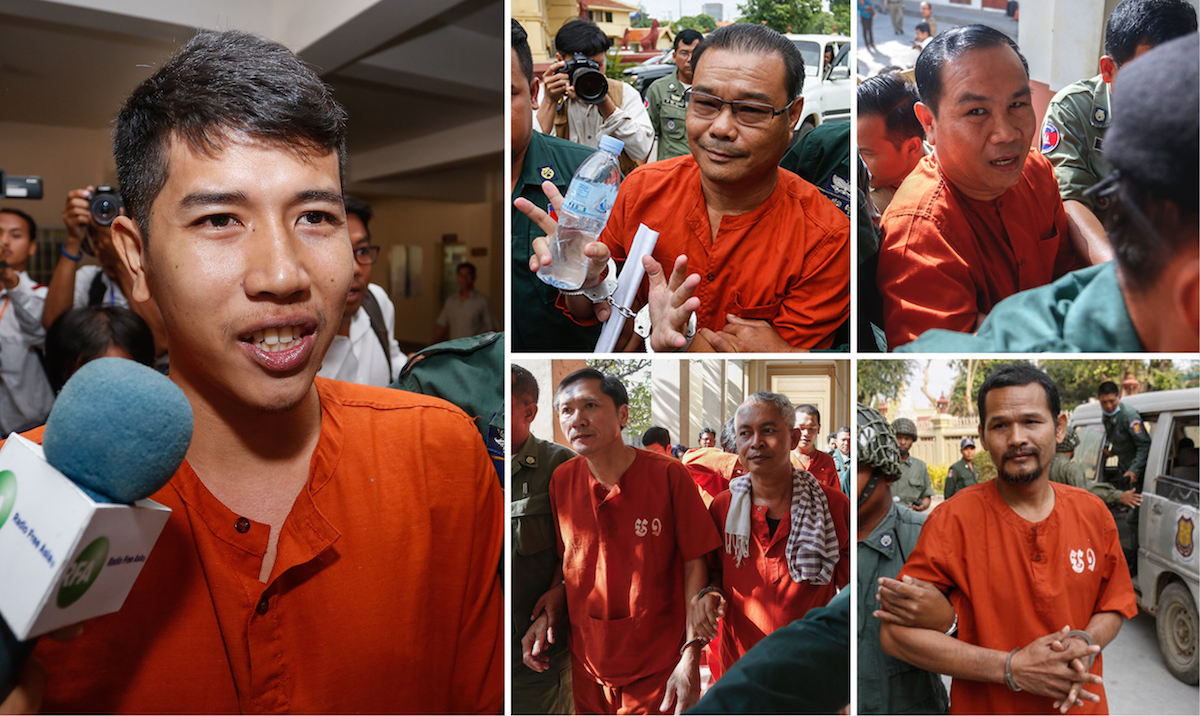 When he entered prison, Kung Raiya was just “a young bull”—a 26-year-old political science student, hot-headed and put in jail for posting on Facebook that he would someday start a “color revolution.”

But inside the walls of Phnom Penh’s Prey Sar prison, he found a teacher. In fact, he says he found a whole group of mentors: rights workers and politicians imprisoned over the past couple of years amid an apparent crackdown on dissenting voices in Cambodia.

In an interview on the day after his release last month, Mr. Raiya recalled what he said ultimately became an empowering experience.

At first, he said, prison guards kept a vigilant watch over him. They banned him from speaking to the high-profile prisoners who were also detained in Prey Sar.

Among them was former CNRP lawmaker Um Sam An and former opposition senator Hong Sok Hour, both tried and convicted on charges of incitement over separate Facebook posts last year. There were also officials from rights group Adhoc, including head of monitoring Ny Sokha, and deputies Nay Vanda and Yi Soksan. They had been jailed last May amid a prostitution investigation into then-CNRP Vice President Kem Sokha.

Inside Prey Sar was a wealth of experience and knowledge that could be invaluable to expand his nascent activism, Mr. Raiya said.

But for the first seven months of his 18-month sentence—handed down for incitement over his Facebook post—he was not allowed to venture out to meet his future mentors. He was consigned to a circle of hardcore criminals, he said, with few people to whom he could really talk.

One day, however, he said he figured out that everything had its price.

“I needed to bribe the guards…each time [so] that they can let me come out to talk,” he said.

That realization opened up a new world.

Mr. Raiya said he began to regularly meet with the CNRP and Adhoc officials, learning patience and judgment and hardening his resolve to speak out about issues plaguing his country, such as government corruption, illegal logging and land grabbing.

“They shared many experiences and advice with me, like how to do politics, and encouraged me to continue my will—to dare—and don’t retreat in demanding freedom” for society, Mr. Raiya said.

Mr. Raiya said that Mr. Sok Hour, the former senator, was especially well-respected among inmates, as he was the most “senior” political prisoner.

“Before, I was very temperamental, like a young bull, but now I have received much experience.”

“The person that I can’t forget is Hong Sok Hour. He is the senior prisoner that I consider as the teacher…. [He] shared his experiences and gave me many opinions,” he said. “He taught me not to quickly trust people, and to judge what is happening in society.”

Mr. Sok Hour and Mr. Sam An, as well as former CNRP media head Meach Sovannara, a U.S. citizen, all resigned from their posts in the CNRP last month to avoid complications over amendments to the Law on Political Parties that give the courts the power to dissolve parties in which the leadership has criminal records.

Critics have described the changes—which Senate President Say Chhum, as acting head of state, signed on Tuesday—as the “final blow” to democracy in Cambodia.

The Adhoc officials, meanwhile, were jailed over an alleged affair between Mr. Sokha and a 25-year-old manicurist, whom authorities claimed the officials bribed to deny the affair. The case is widely perceived to be part of the government’s crackdown on political opponents coming up to the June commune elections and national elections next year.

“The rights group officials, they taught me to be patient, about advocacy and to understand about the rights,” he said.

On the day he left prison, Mr. Raiya had told reporters: “Before, I was very temperamental, like a young bull, but now I have received much experience.”

Sorn Keo, deputy director of the government’s general department of prison’s correctional department, rejected Mr. Raiya’s claim that guards at the facility accepted bribes in exchange for meeting other prisoners.

“We do not have the policy of taking bribes in order to meet someone,” he said.

“Normally, our officials respect their morality and disciplinary. If we find them involved with irregularities, we will punish them according to our rules.”​

Mr. Raiya’s attitude has parallels to those of dissident detainees from 10 years ago. Yeng Virak—then the director of the Community Legal Education Center—was jailed at the end of 2005 over a banner critical of Prime Minister Hun Sen displayed at International Human Rights Day celebrations.

When Mr. Virak was released on bail the following year, he described his short detention as “a great experience” and vowed to pursue human rights advocacy with even more enthusiasm. Today, he is the president of the upstart Grassroots Democracy Party.

About a week after Mr. Virak was released, Kem Sokha, the then-director of the Cambodian Center for Human Rights was also set free from Prey Sar after almost three weeks in provisional detention over the same banner, which embroiled several activists in a defamation suit led by the prime minister.

“They could detain us, but they cannot detain our conscience,” said the director—Mr. Sokha—who was last week made the president of the CNRP, the country’s main opposition party.

CNRP Vice President Mu Sochua, who was promoted last week, was also briefly detained in Prey Sar prison along with a group of her colleagues in 2014 on charges of insurrection and incitement over a protest that turned violent.

In an email, Ms. Sochua said that she, like Mr. Raiya, had been carefully monitored. “I was assigned a prisoner who said that she was supposed to watch me,” she said. 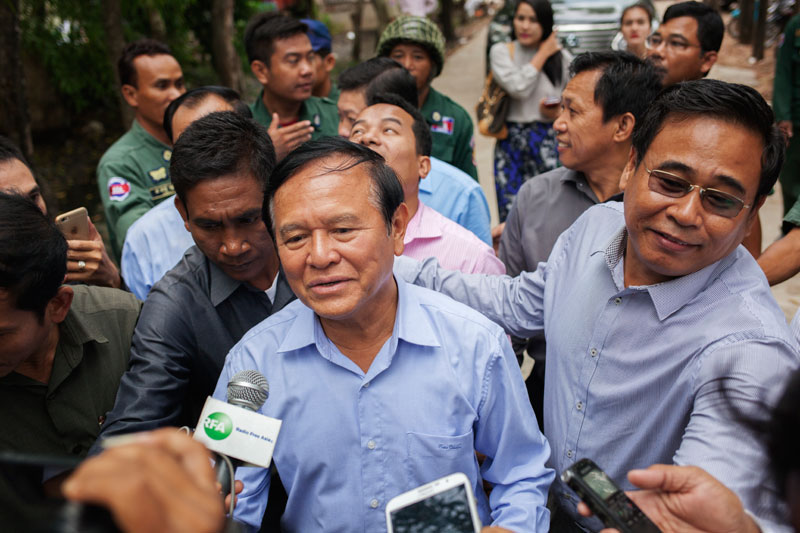 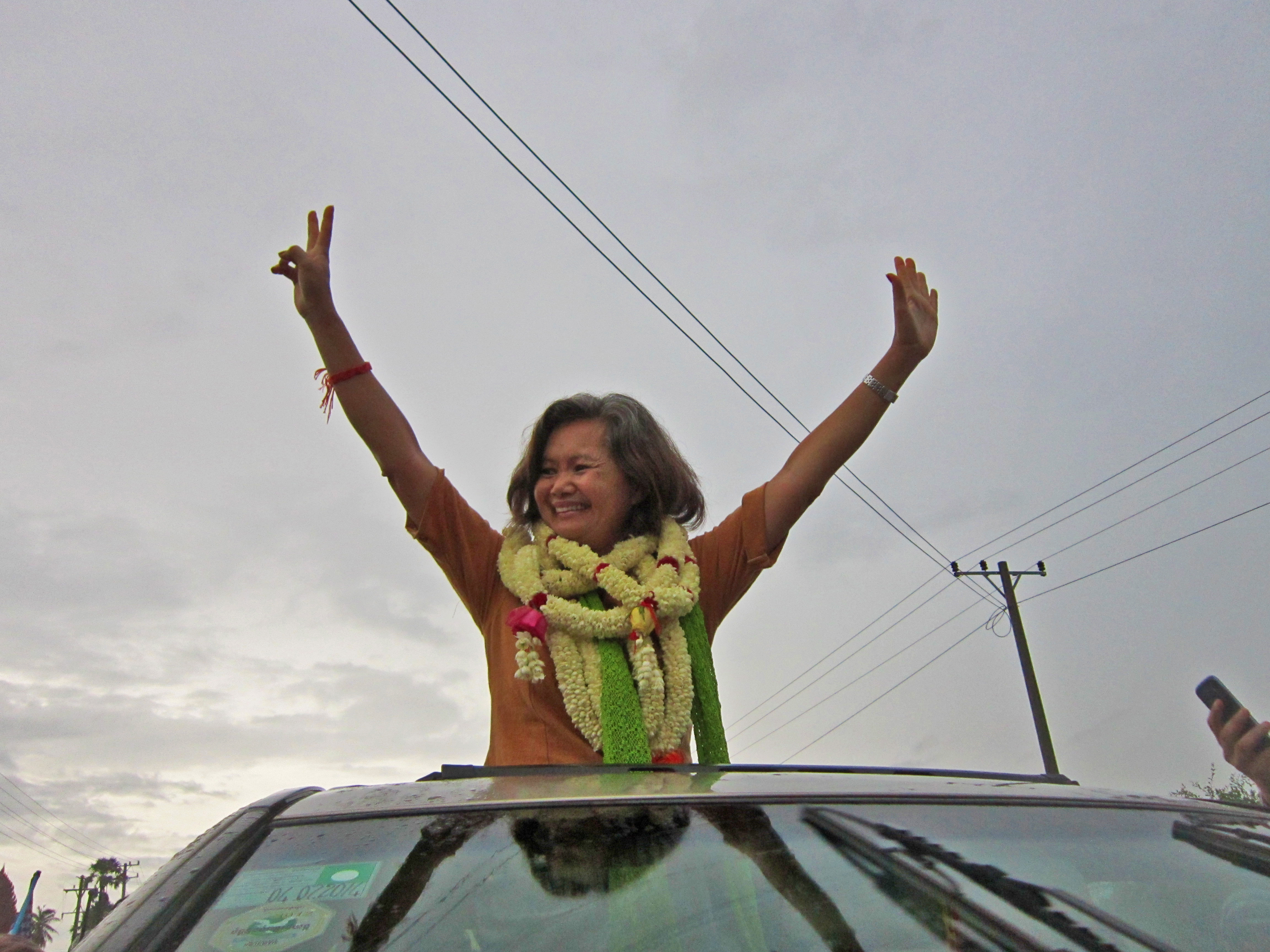 As she was the only prisoner with a political background in the female correctional facility, there were no other party members or activists to turn to—and, very quickly, no other prisoners either, she said.

The veteran politician and long-time activist said she was given a rare insight into rights abuses inside Cambodia’s prisons when fellow inmates came to her with their plights.

Her position did not go unnoticed. She said prison officials swiftly retracted whatever little freedom she had after women approached her “one by one, openly or discretely, to tell me how they were tried without a lawyer, or no evidence, or their cases [were] forgotten.”

“On the second day, I was denied the time outside to the big courtyard where the rest of the 500 female prisoners were let out twice a day, because I was attracting too much attention,” she said.

“After the second day, I was never let out of the very narrow courtyard in front of the cell…. I could only wave to the other women on the other side when they were let out in the big courtyard,” she said.

Still, she said, “My short presence there seemed to have lifted the spirit of the women.”

Ms. Sochua said that as a recent visitor to the prison, she observed how Mr. Raiya had been “empowered” and “reassured” by being able to speak with other government critics.

“I saw Raiya every time I visited my colleagues. I noticed how he was empowered, reassured, lifted in spirit by being with the political prisoners who are older, more experienced,” she said.

“I noticed how he became sharper in his words, and…his speech, when he was released, was so moving, inspiring, hopeful,” she said. “I cried watching his tears.”

Mr. Virak, the Grassroots Democracy Party president jailed 12 years ago, said that he remembers “90 percent of the guards” having sympathy for him and his fellow activists during his time behind bars. However, he said, political discussions among dissidents were hushed, as they were acutely aware of being “under surveillance.”

He said that for him, the act of being thrown in jail—and not the specific experiences or conversations during his detention—inspired him to work harder to protect human rights upon his release.

“It was not the experience I got in Prey Sar, but the fact they used the so-called justice system to put me behind bars that made me more determined, more serious to do my work as a human rights defender,” said Mr. Virak, who worked to provide legal aid for prisoners perceived to be politically persecuted, such as land activists and union leaders.

The situation today, he added, was worse than in 2006. Licadho, a rights group, currently puts the number of political prisoners in Cambodia at 27.

“It’s been more than 10 years, and still people are thrown in jail on no real grounds…. It’s going back to square one,” he said. “It should be progressing, not going back.”

A week before Mr. Raiya was released, political analyst Kim Sok arrived at Prey Sar. Mr. Sok was charged with defamation and incitement for apparently linking the government to the July murder of political analyst and frequent government critic Kem Ley in an interview with Radio Free Asia.

Mr. Raiya said Mr. Sok had been unwavering in his views and attitude that landed him behind bars.

“He told me to tell everyone he has not changed his mind,” Mr. Raiya said. “He will continue analyzing. He is not scared.”

Government spokesman Phay Siphan said he was unconcerned about government critics banding together in prison to share and discuss political ideas—even if they included schemes about color revolutions.

“Cambodians have a right to do and say anything,” he said.

But Sok Eysan, a spokesman for the CPP, said that if Mr. Raiya and his ilk continued their ways, there was only one place for them.

“If you can’t change your mind, continue it,” he said. “We are going to bring you to the correctional facility.”