Home Environment Two Deaths and over 14,000 People Displaced due to Floods in Cambodia

Two people were reported on Oct. 10 to have died in a flash flood, which affected more than 14,000 people across Cambodia.

“Nine provinces—Banteay Meanchey, Battambang, Kampong Chhnang, Kampong Speu, Kandal, Pailin, Pursat, Svay Rieng and Takeo provinces—as well as Phnom Penh have been affected by floods due to the heavy rains since Oct. 1,” Khun Sokha, spokesman for the National Committee for Disaster Management, said in a phone interview on Oct. 10.

According to Sokha, the floods have affected more than 14,000 people, with more than 700 people having to be evacuated. This natural disaster also caused two deaths: one person who died from drowning and the other due to a lightning strike, he said. 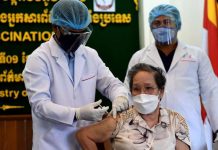