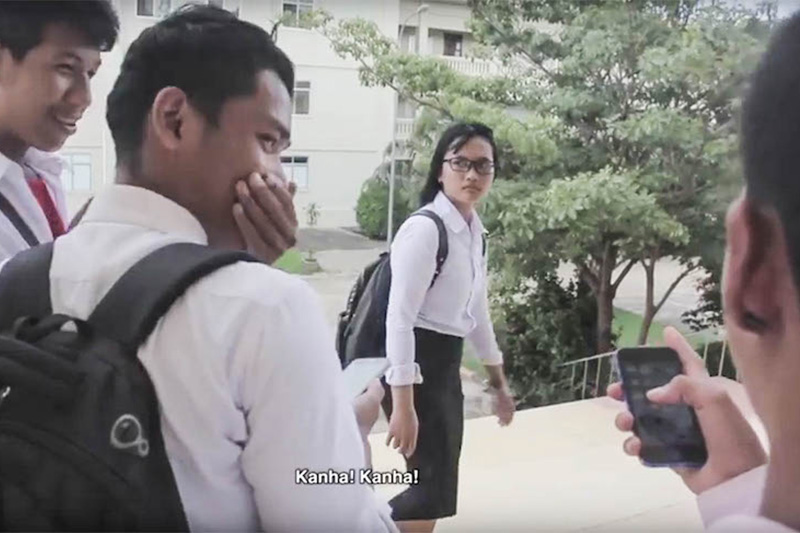 Sitting at a cluttered desk in a dark corner, a scientist pours brightly colored liquid from one vial to another. Scratching his head, he adds another ingredient, but his experiment is fruitless: He still hasn’t figured out the formula for ending sexual harassment.

This is the opening scene of 19-year-old Vy Makara’s short film, “The Formula to Stop Sexual Harassment,” which won the award for the best film by a director under 20 years old in the “Why Stop Short Film Competition.”

“You don’t need to find a formula—just stop doing these actions.”

Organized by CARE Cambodia, a global anti-poverty NGO focusing on women’s issues, the competition invited young men to create one- to five-minute films exploring the issue of sexual harassment.

The awards night and screening of the 16 finalists’ films was held on Friday night—coinciding with the first day of an annual campaign by U.N. Women entitled 16 Days of Activism Against Gender-Based Violence—at Aeon Mall’s Major Cineplex.

Van Sibaro, whose filmmaker alias is Stephen Row, won the over-20 age group for his film “One Touch,” about a group of men who learn that a girl they had been sexually harassing committed suicide. A shot of one of the men imagining he is in handcuffs as he hears the news over the radio at a cafe wraps up an emotional five minutes.

“No one can talk about it with more influence than men,” Mr. Sibaro said on Friday. “Because women are embarrassed to talk about it, and it is done by men, in this case I think it is best for men to create the awareness.”

The overall best film award went to 18-year-old Khan Khav for “7 Colors Underwear,” which centers around a high-achieving high school girl who is sexually harassed on social media. She becomes so humiliated that she leaves school, abandoning her dreams of becoming a lawyer.

Sara Denby, a campaign officer at CARE for gender based violence, said that men must be at the center of efforts to address sexual harassment.

“[Men] are a big part of the problem, so they have to be part of the solution,” Ms. Denby said. “It’s really important to engage them.”

Earlier in the year, the organization interviewed a broad range of men—high school and university students, tuk-tuk drivers and customers at beer gardens, bars, nightclubs and karaoke parlors—to find out what they knew about sexual harassment and how they viewed the issue.

Ms. Denby said the key insight from those discussions was that some men saw no problem with sexually harassing women, exposing a basic lack of empathy for the women exposed to it.

“The revelation statement was that until men understand why it is a problem and how it makes women feel, it won’t stop,” she said.

It was from these discussion groups that the film competition was conceived. In August, an educational roadshow orchestrated by GMB Films visited about 50 schools and youth groups around Cambodia.

“The conversations that came out of it—irrespective of whether they made a film—were so powerful and so emotional,” Ms. Denby said, adding that for many of the young people involved, it was the first time they had shared their experiences of being sexually harassed.

“They weren’t [previously] talking about it, because of the word ‘sexual’—sex is considered a taboo topic,” she said.

All of the finalists’ films have been made available on CARE’s YouTube channel and website, where the public are able to vote for the audience choice award, to be announced on International Human Rights Day on December 10.

Ms. Denby said there are ongoing talks with the Ministry of Education, which endorsed the competition, to integrate the films into the standard school curriculum.

The only female filmmaker finalist, 22-year-old Theng Panha, said she hoped her film “Oudom”—about a young man receiving life advice from his deceased father through an emotional letter—sends a strong message about the consequences of sexually harassing women.

“We need to feel safe to be able to express ourselves,” she said.