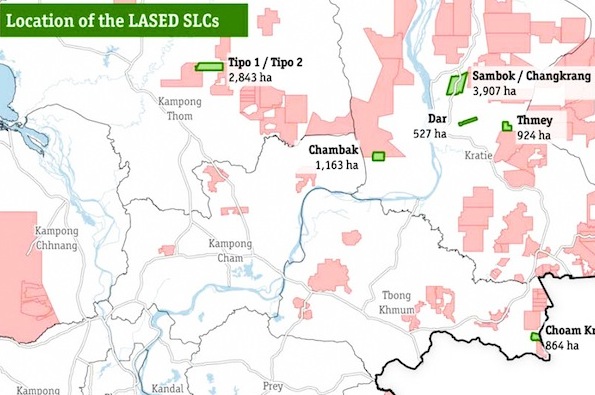 World Bank Project in Trouble Before It Starts

Between 2008 and 2015, the World Bank and German aid agency GIZ spent $13 million setting up eight social land concessions for thousands of the poorest Cambodians, doling out small farms they could use to pull themselves out of poverty and, after a few years, own outright.

Soon, the Bank hopes to start spending another $25 million on phase two, building up the eight sites—plus five others set up with help from Japan—and adding a new site in the north of Kompong Thom province.

The trouble is, the swath of land picked out for the new site is already packed with hundreds of working farms. That’s raising ques­tions about how the Bank can turn it into a viable concessions for new arrivals—and more doubts that the project itself can be turned into the kind of replicable model for poor families that the Bank wants it to be.

“It’s not hard to predict the problems that are coming. We’ve seen them already, and so has the government and the World Bank,” said Naly Pilorge, director of rightsgroup Licadho, which has studied the Land Allocation for Social and Economic Development (LASED) project.

“The first LASED project faced several problems because…recipients received land that was al­ready occupied,” she said. “In some cases, landlessness was simply transferred as poor families were forced to make way for other poor families. In other cases, land recipients remain un­able to use the land giv­en to them due to ongoing disputes with oth­er families or powerful actors. The World Bank never acknowledged or addressed these problems the first time around and now appears set to repeat the same flawed process.”

The Bank noted, as early as Sep­tember 2014, the site’s possible overlap with local indigenous communities—it later decided the concern was unfounded—and the potential need to force some people to move for necessary infra­struc­ture as part of a second phase of the project. The Bank has since moved several steps closer to approval.

Government officials, from the Ministry of Land Management down to the Prasat Balaing district villages selected to host the new concession, all acknowledge that families are already farming the proposed 2,900-hectare site. But there’s little agreement on what to do about it.

Sareth Boramy, the LASED pro­ject coordinator at the Land Man­agement Ministry, said he was aware that families were farm­ing at least “some part” of the proposed site, but declined to discuss how the government might deal with them and wheth­er eviction was an option, as it’s been with past social land concessions.

“I don’t have any idea about the solution yet…. I don’t know if it will be hard or easy,” he said.

“We need to verify how much land [is] remaining,” he said. “We need to check and analyze again—when they farmed, how much they farm.”

He stressed that a final decision on whether to turn the site in­to a concession for the project was still pending.

Prasat Balang district governor Touch Sokha said the plan would give about 300 new families five hectares each. Though part of the site is prone to seasonal flooding, he said he was optimistic that it could still be turned into a social land concession. He said about 50 families were farming a few hundred hectares, but predicted that they could be easily incorporated into the project or have their farms simply cut out.

Officials who live in Doung commune, however, where the concessions would go, are not so sure.

Commune chief Sok Meng­thong said the site was first earmarked for a social land concession in 2006 and that uninvited families started marking off and farming small plots of land inside the area within a year.

“Now, about 1,000 families are cultivating the concession area and they have occupied almost all of the land,” he said.

“Our authorities will have difficulty preparing the area to be­come a social land concession in the near future because many fam­ilies are farming the land,” he said. “We cannot evict the families be­cause they have been farming for a long time.”

Mr. Mengthong said a recent survey of the site identified about 900 hectares not being farmed. But in 2012, he said, a pair of local businessmen each bought up roughly half that area from the families that were farming it, paying between $300 and $400 per hec­tare. Having paid more than a quarter-million dollars for the land, the pair might not let the government and the World Bank hand it over to a few hundred new families without a fight—or a payout.

Ta Mom village chief An Om said 240 families were farming about 400 hectares of the proposed concession in his village alone, some of them since the 1980s.

“Those people don’t live on the land, but they farm on the land every year,” he said. “I think the government will not be able to make the area a social land concession because the families have occupied the land and they will protest against the project.”

A satellite image of the commune published by Google Earth and dated last month also shows little free land anywhere, most of it marked off by a busy network of berms between worked-over rice paddies.

The problem is not new for the LASED project.

After visiting the original eight sites last year for a report on the project, Licadho found that some families awarded plots were un­able to farm them when they showed up because others claiming the same land were refusing to let the newcomers cultivate it.

It was but one of many problems the researchers found with the sites. They also noted soil too poor to farm, plots covered in forest too dense to clear, and a dearth of promised roads, schools and clinics to make the communities live­able. In its own assessment, the World Bank touted the more than 3,000 families awarded plots on the eight sites. But Licadho found that many families had given up on their plots—and their chance at a land title under the use-it-or-lose-it rules of the project—because of the tough conditions, with some of the eight sites more than half abandoned.

“While additional support is needed to meet the promises of re­duced poverty and increased food security for many of the families supported by LASED, the World Bank and GIZ first need to acknowledge that the project is far from a replicable model, and no­where near a success story by any standards,” Licadho concludes in a report it published in June.

In its own assessment of the project, published four months later, GIZ echoed many of Lica­dho’s concerns.

It noted “low settlement rates” at some of the sites and called the selection of suitable land the “big­gest challenge” to starting up the con­cessions because vacant land of suitable size was all too rare. GIZ noted, too, the Cambodian gov­ernment’s failure to put any of its own money into the project and said the scheme would be “difficult to replicate” without on­going donor support.

“It is, of course, clear that the land that is being provided—

public land provided for such land concessions—should be land that forms a viable basis for good living of the people who should be settling there. Otherwise, they won’t accept it and go away again, and that has happened. I don’t think it really had anything to do with what Germany showed and taught the Cambodian side, but we have provided sort of a framework for such land concession approaches,” he said in a recent interview.

“GIZ has provided the tools, so to speak, to plan social land concessions. How these are then be­ing used is really beyond the realm and the scope of GIZ.”

Germany is currently phasing out its land rights support for the government after more than 20 years, in frustration with the slow pace of reforms. It will still work on the second phase of the LASED project once the World Bank approves it, Mr. von Mar­schall said, but only through the families settled on the concessions—not the government.

“We are not working together anymore with the Land Min­istry,” he said. “We are only working together with the families them­selves and, as far as that is necessary, with the district governments. So it’s a modified version.”

For its part, the World Bank has put out nothing but glowing re­views of the project and ig­nored all requests for comment as it gears up for phase two. If and when approved, it will be the Bank’s first new loan to Cambo­dia using its own funds since 2010, after which it put a freeze on new lending to the country in protest over the gov­ernment-led eviction of some 3,000 Phnom Penh families during a Bank-funded land titling project.

Rights groups find it a sad irony that the project that might end the freeze could spark more evictions.

Instead of trying to turn the LASED project into something that could and should be repeated across the country, said Ms. Pilorge of Licadho, the government would be far better off helping titleless families secure the land they have.

“A fundamental problem with distributing farmland to poor families through SLCs is that there is hardly any vacant, suitable land avail­able in Cambodia,” she said. “Instead of investing time and much money in a project certain to lead to more land disputes, the gov­ernment should focus on en­suring land tenure security for poor families where those families already occupy land.”