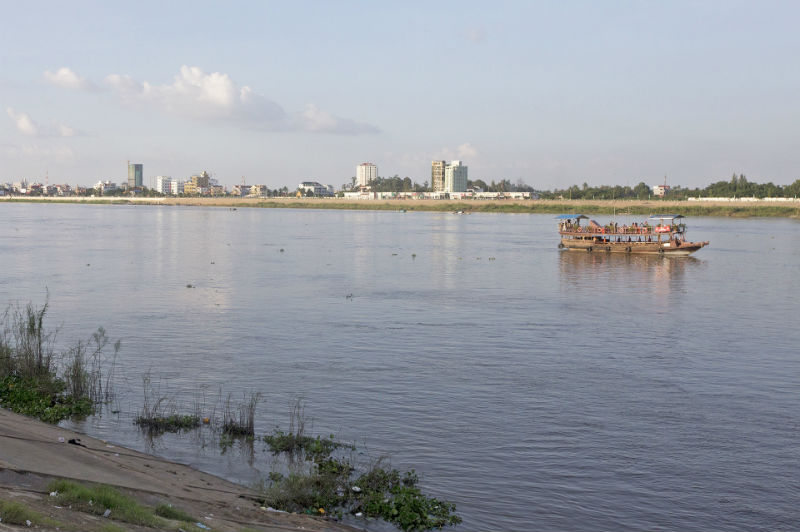 Phnom Penh’s annual Water Festival has been canceled for the fourth time in five years, with the government citing low water levels and drought as the reason for calling off the event, according to a statement released on Saturday.

However, a senior opposition lawmaker and a political analyst cast doubt on the reasoning for the decision, suggesting the government does not want to have hundreds of thousands of people descending on the capital during a politically tense time.

The statement canceling the festival, which was signed by Prime Minister Hun Sen, stated that the decision to cancel the three-day event was the result of nationwide water shortages and low water levels.

“The river is low this year and Cambodia is now facing drought, and the government demands the collection of forces to solve the water shortage problem for the rice fields in the dry season,” the statement said.

While there will be no boat races, music concerts or streets filled with vendors in Phnom Penh, civil servants and garment workers will still be given a three-day holiday, the statement added.

During a speech in Kampot province on Sunday, Mr. Hun Sen said he festival had been canceled because the water level of the Tonle Sap is expected to drop to 4.2 meters by November 24, when the festival was scheduled to start, well below the usual depth of 7 to 8 meters.

“This year, the river water is very low, and this is not just happening in Cambodia, but also in China, Myanmar, Laos and Thailand,” Mr. Hun Sen told an audience of retired soldiers.

“Therefore, the water is not able to flow to the lower areas and people living along the river are facing water shortages for cultivation of rice in the dry season.”

According to figures from the Mekong River Commission, the Tonle Sap was 4.31 meters deep in Phnom Penh on Friday. On the first day of the festival last year, the depth was at 6.11 meters.

Government officials yesterday echoed Mr. Hun Sen’s claim that the water levels were too low for the boat races to take place.

Bou Chumserey, undersecretary of state at the Ministry of Education, Youth and Sport, said the shallow waters meant that boats would not be able to make it to Phnom Penh on the water, as is common practice come festival time.

“It is difficult for us to organize the celebration because the water level is low in some areas so we are not able to bring the boats in the river,” Mr. Chumserey said.

CPP spokesman Sok Eysan said he “was not an expert” on water levels or boat racing, but that it would be inappropriate to celebrate in the capital while farmers in the provinces are struggling as a result of low rainfall.

“We should not create so much happiness when our people are facing drought across the whole country and they lack water for rice cultivation,” Mr. Eysan said.

Last year saw a triumphant return of the annual affair after a threeyear hiatus following a stampede on the last day of the festival in 2010 that caused the death of 353 mostly young revelers on a bridge connecting Phnom Penh to Koh Pich island.

The festival was ostensibly canceled due to flooding in 2011 and 2013, and because of the death of King Father Norodom Sihanouk in October 2012.

Lim Srey Aun, 28, whose father owned the Chan Reaksmey Saray boat from Kompong Chhnang province until his death in 2013, voiced disappointment at the decision to cancel this year’s festival and said the water levels were high enough for races to go ahead.

“The water levels of the river now is not too low, it can be used for the boat racing,” Ms. Srey Aun said, adding that the lower water level could make it difficult to dock the boats once they are in Phnom Penh.

Others said the government’s reason for pulling the event did not make sense.

“Why would [water levels] be a reason?” said Ou Virak, a political analyst and founder of the Future Forum think tank.

Mr. Virak said last week’s political turmoil—in which two CNRP lawmakers were violently beaten during a CPP protest and deputy opposition leader Kem Sokha was removed as first vice president of the National Assembly by CPP lawmakers—may have played a part in the decision.

“That probably contributed to it, it’s probably not the whole thing but they’ve canceled four out of five years for various reasons,” he said. “I think one reason is they just don’t like the crowds coming to Phnom Penh, they’ve never seemed to like that, as with the opposition protests [in 2013].”

CNRP lawmaker Son Chhay also said he suspected the decision was due to government paranoia over the prospect of large numbers of people descending on the city.

“I heard the government a few days ago saying there would be no problem, so they seemed to commit themselves and now there’s a cancellation,” he said. “It could be that they are scared of people coming to Phnom Penh.”