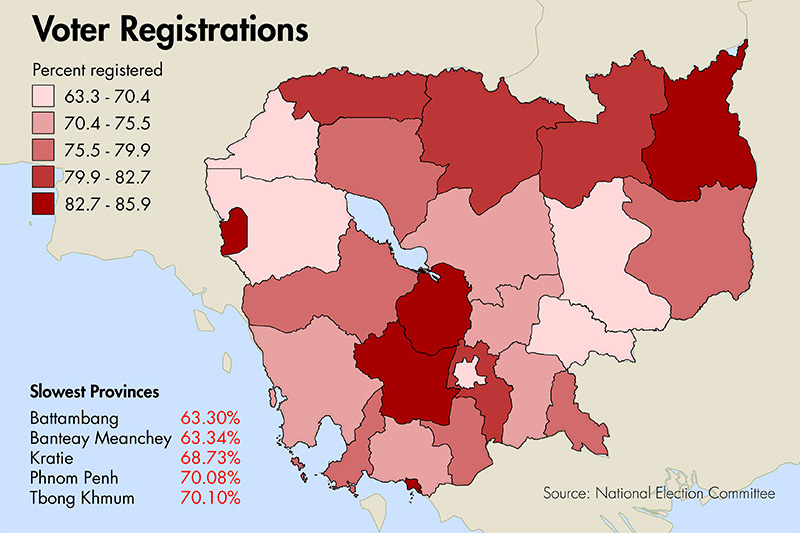 Election officials toured the country during this week’s Water Festival holiday to investigate a recent sharp drop-off in the pace of voter registrations, but no glaring issues were found, a National Election Committee (NEC) spokesman said on Wednesday.

“The NEC will not extend the deadline for registrations,” said Hang Puthea, a spokesman for the committee who visited the provinces of Tbong Khmum and Kompong Cham. “Most local residents in almost all of these communes have already registered.” 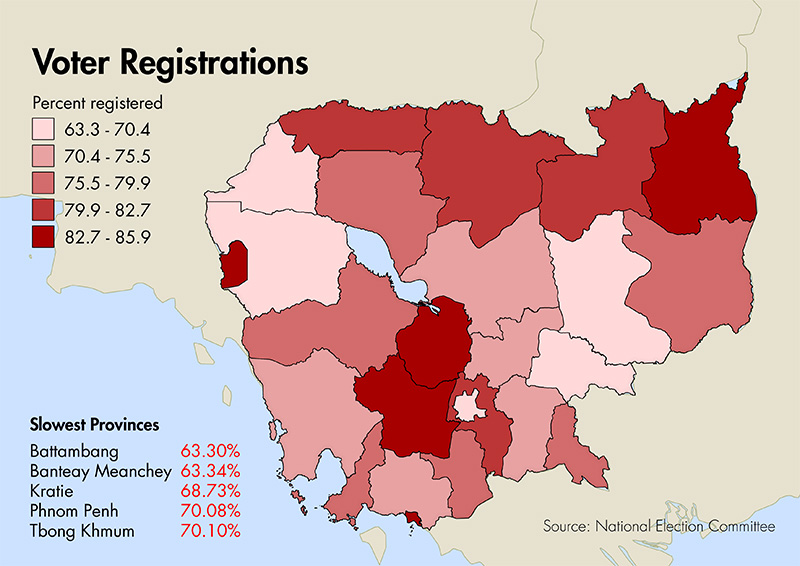 None of the delegations to the country’s 25 provinces reported any obvious problems, he said.

Both Tbong Khmum and Kompong Cham are relative laggards in registrations, stuck at 70.1 and 70.5 percent of eligible voters registered, respectively, both falling below the national average of 74.4 percent.

Nationwide, after a brisk first two months, registrations have slowed significantly in recent weeks, from more than 100,000 a day during the first 40 days since the start of registration in September to about 30,000 last week.

This week’s Water Festival holiday caused a slight uptick in registrations, Mr. Puthea said, to about 50,000 registrations a day across the country.

“It was a very bad decline lately, and some days there were less than 30,000 voters registered,” he said. “But during the three days of the Water Festival, many garment workers returned to their home provinces and they registered there.”

Even if the holiday pace was maintained, total registrations would not reach 80 percent by the November 29 deadline.

Mr. Puthea, nevertheless, said he was satisfied with current totals. The bulk of the remaining unregistered voters were likely working abroad, he said.

“We don’t believe that we will be able to register 100 percent, but we at least have more than 74 percent of voters registered across the country,” he said.

The two slowest provinces for registrations are Battambang and Banteay Meanchey, both along the border with Thailand, which hosts more than 1 million Cambodian migrant workers according to some estimates. Just 63.3 percent of voters have been registered in both provinces.

Workers abroad cannot register or vote unless they return to their home communes, despite requests by the CNRP to have special registration centers set up along the border or other channels to cast ballots from abroad.

George Edgar, the ambassador in Cambodia for the E.U., which together with Japan has funded the new computerized voter registration system, said he was confident that any issues were being dealt with appropriately.

“We have followed the voter registration process closely, and congratulate the National Election Committee on their work so far,” he said in an email.