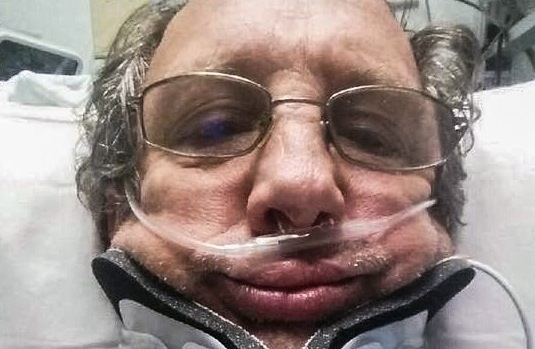 US Man Tells Of Assault by Hun Manet’s Bodyguards

The American man who claims to have been assaulted in California last weekend by a bodyguard of Prime Minister Hun Sen’s son, Hun Manet, as he tried to serve a court subpoena said on Thursday he was considering pressing charges.

Paul Hayes says he was dropped on his head outside a restaurant on Saturday while serving Lieutenant General Manet a subpoena relating to a wrongful imprisonment suit brought in a U.S. federal court by opposition official Meach Sovannara.

Speaking by telephone from his hospital bed in Los Angeles on Thursday, Mr. Hayes said he was interviewed by police while waiting to be admitted to an intensive care unit on Saturday with bruising to his spinal cord. He said he had not yet decided whether to file charges with police.

“I would like to reserve comment on that right now. At this point, I just want to make sure that I do not jeopardize my health. I am looking at what legal remedies are available to me,” said Mr. Hayes, who is a private investigator hired by Mr. Sovannara’s lawyers.

Mr. Hayes said that he arrived at about 5 p.m. on Saturday at the La Lune restaurant in Long Beach, California, where Lt. Gen. Manet was set to dine with supporters, and found two parking spots cordoned off in front.

“It’s your regular, ordinary strip mall. It was a very surprising place for a Cambodian general to be having a banquet,” Mr. Hayes recalled. “It’s a hole in the wall and it’s on the end of the road, near a laundromat. I was told the banquet would start at 6 p.m, so I parked my car in the next spot over, and thought, ‘Hey, I’m in.’”

After waiting in the area for a while, he said, “I identified myself to some police officers and said: ‘As soon as General Manet arrives, I will approach him with this, and I don’t want you to think I’m attacking him,’” he said.

“One officer, who was Cambodian by the way, took my ID and went to show it to his boss and said it was all OK. But it did not go to plan. As soon as Manet gets within five to 10 feet of me, I squeezed past the men in suits [his guards] and I yelled out to the general.”

“Now, witnesses will know better than I do, because it came from behind me, but someone picked me up, lifted me, and threw me backwards, knowing fully well that we were on asphalt. I landed on my head.”

Mr. Hayes said that the next thing he knew, he was waking up on his back in the parking lot in pain.

“After about 30 seconds, I’m able to roll my body to the right, but I have no control of my arms, they’re just flopping around,” he said. A paramedic then took him to a nearby hospital, where police also interviewed him.

“We did CAT scans, chest X-rays, and the doctor says, ‘I’m checking you into the ICU and you’re going to be there for three to five days because this is more serious than you think. You have a bruise on your spinal cord and this could lead to paralysis,’” he said.

“The doctor says that the best-case scenario is that the pain will be with you forever. That scared me, because the pain in the moments after felt like electric shocks going from across my chest to my neck.”

“I get steroids every six hours to try to reduce the swelling on my spinal cord. I’m up walking now, but I may have to get cervical surgery in my neck.”

Keith Rohman, the director of the Los Angeles-based Public Interest Investigations firm, for which Mr. Hayes works, said in an email that he was appalled by what happened in Long Beach and said that he believed Mr. Hayes would press charges once he was out of the hospital.

“This is an outrage. Paul Hayes is an American citizen who is properly licensed to serve court documents. In the course of attempting to legally deliver these court documents he was brutally attacked, presumably by individuals working for Hun Manet,” Mr. Rohman said.

“We are calling on the Long Beach Police Department to conduct a prompt and thorough investigation of this matter,” he added.

The Long Beach police have not responded to multiple requests for comment. In Phnom Penh, the head of the Interior Ministry’s bodyguard department, Touch Naruth, who oversees the assigning of bodyguards, declined to comment due to the Khmer New Year holiday.

“What I have learned from the people there is that this man tried to attack Hun Manet, then a bodyguard sprayed him with pepper spray, and then this man accused him of hitting him,” Mr. Siphan said.

“The bodyguard was protecting Hun Manet proportionally. They just pepper-sprayed him.”

Asked why he believed Mr. Hayes had been sent to an intensive care unit and placed in a neck brace if he had not been assaulted, Mr. Siphan said he did not know.

“Maybe he fell down,” the spokesman added.

Lt. Gen. Manet did not respond to requests for comment on Thursday. Mr. Hayes had been trying to serve him a subpoena for a lawsuit brought in a U.S. federal court by Mr. Sovannara, an opposition official who is serving 20 years at Phnom Penh’s Prey Sar prison.

Mr. Sovannara, whose family lives in Long Beach, was last year found guilty of “leading an insurrection” for his presence at a 2014 protest that turned violent. He is suing Lt. Gen. Manet and the Cambodian government itself for damages over wrongful imprisonment.

The CNRP official’s U.S. attorney, Morton Sklar, who has long worked on legal cases for the opposition, said the alleged assault of Mr. Hayes while he was trying to serve legal documents was symbolic.

“What happened to Paul Hayes, the process server, is typical of what the Hun Sen government does,” Mr. Sklar said. “It uses violence and intimidation to suppress basic rights. But it’s amazing this happened in the U.S. It may be common in Cambodia, but this never happens in the U.S.”