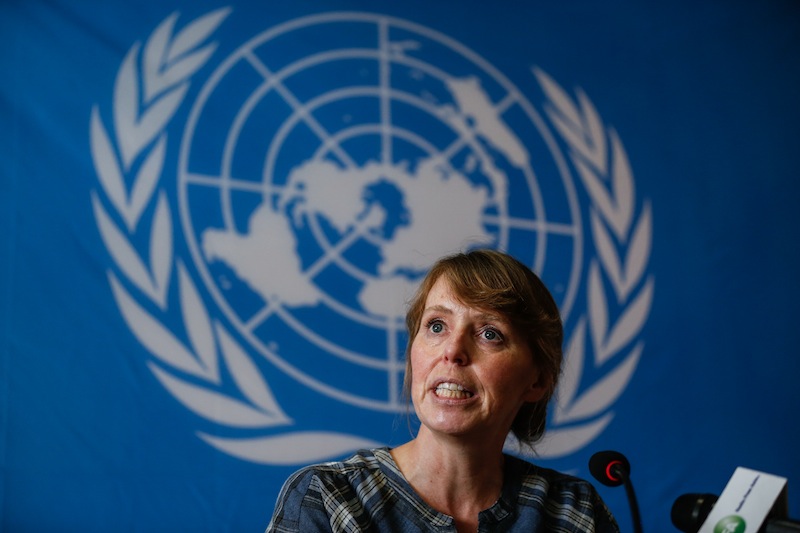 The U.N.’s human rights envoy to Cambodia said the political climate had clearly deteriorated in the six months since her first fact-finding mission and that the country remained at a “dangerous tipping point” ahead of commune and national elections.

Since Rhona Smith’s first visit as special rapporteur in September, opposition leader Sam Rainsy, who remains in self-imposed exile, has been issued an arrest warrant over a yearsold defamation conviction widely seen as politically motivated. Two CNRP lawmakers were severely beaten outside the National Assembly during an anti-opposition protest. CNRP vice president Kem Sokha is facing a corruption investigation on the back of mysteriously leaked recordings of private telephone conversations allegedly between him and at least two mistresses. And a university student has been convicted of incitement and sentenced to a year and a half in prison for a Facebook post suggesting a “color revolution,” a phrase generally understood to refer to regime change through peaceful protest.

“I think there is undoubtedly a difference between my mission in September and now,” Ms. Smith said on Thursday during a press conference in Phnom Penh capping a two-week mission to the country.

“There have been a number of instances…giving rise to concern and which are worrying. So I don’t think there is any doubt that there is more tension and there are more potential human rights violations now than in September,” she said.

“I am aware of the number of cases being raised and reopened against opposition leaders and members of the opposition party. Obviously, the Cambodian courts should apply Cambodian law fairly and in accordance with a strict and consistent interpretation of the law, irrespective of the political affiliation of any individual appearing before the court.”

Ms. Smith, a professor of international human rights law in the U.K., did not discuss specific cases, but said she was reviewing several.

“What is potentially of concern is the perceived restriction on members of the opposition party that these court cases are causing, restrictions that are not currently being imposed similarly on members of any of the other political parties in Cambodia. There is certainly concern of the use of law as a political tool rather than a legal tool for securing justice.”

The rights envoy said a neutral court system would be especially critical in the lead-up to commune elections next year and the national election—in which the ruling CPP looks set to face its toughest fight in 25 years—in 2018.

“Cambodia is close to a dangerous tipping point,” Ms. Smith said. “All laws must be applied equally and fairly to all political parties and their members to ensure protection of the democratic space in the run-up to the elections. The political situation, which includes renewed threats, judicial proceedings and even physical beatings of members of the opposition, is worrying.”

On Thursday, Ms. Smith also stressed the need for the government to strictly and consistently apply all laws, including the Law on Peaceful Assembly, which states that prior notification is not required for “educational dissemination activities for social interests.”

“I experienced myself what NGOs are facing when an alleged commune police officer, out of uniform, tried to stop my meeting with indigenous Kuoy groups in Preah Vihear province,” she said, adding that the assembly law “makes clear that such meetings do not require notification or approval.”

Ms. Smith said she would release her first report on Cambodia as rapporteur in August.