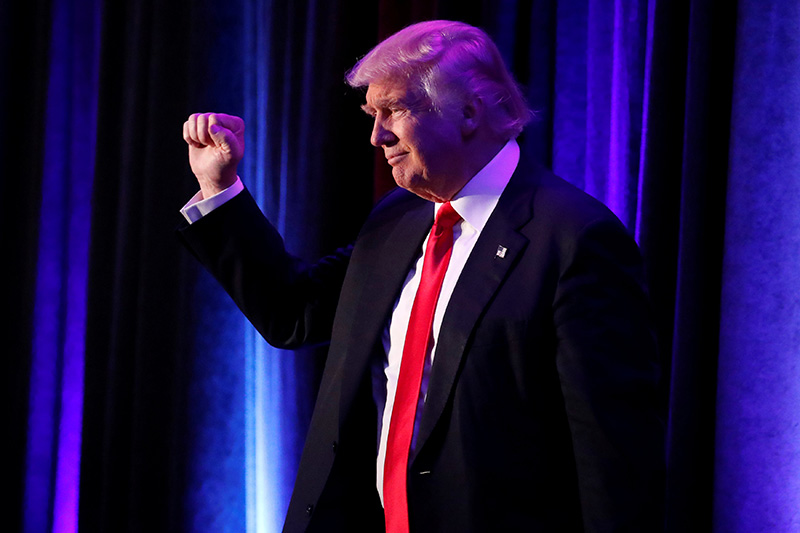 Trump Wins. What Does It Mean for Cambodia?

Donald Trump’s victory in the U.S. presidential race on Wednesday shocked pollsters, political pundits and many Americans who had scoffed at their president-elect when he announced his candidacy 17 months ago.

As a global audience digested the news—it was clear by lunchtime in Cambodia that Mr. Trump was headed for victory—Mom Sinath, 63, was sliding meatballs onto a skewer to sell to passersby outside the Royal Palace in Phnom Penh.

Despite having a daughter and three granddaughters living in Long Beach, California, she said she wasn’t paying any attention to the election half a world away.

“This is not a Cambodian election,” Ms. Sinath said. “I don’t know who to support. I support who Americans vote for.”

While Mr. Trump, a real estate developer and former reality television star, and his Democratic rival Hillary Clinton, a former secretary of state and senator, made for a stark contrast in almost every way. Their views on Cambodia never made it into the debate.

Analysts said it was unlikely that the Trump administration would cause a major shift in U.S. policy toward Cambodia come January, when Mr. Trump will be sworn into office.

“I think it’s safe to say he’s going to continue the same path,” said Ou Virak, head of the Future Forum public policy think tank. “Cambodia is not a strategic country for America.”

“Trump is very volatile and we don’t know what type of foreign policy he believes,” he said. “He doesn’t seem to know most of the world.”

Sebastian Strangio, the author of “Hun Sen’s Cambodia,” who now lives in the U.S., said the change in U.S.-Cambodia relations would be minimal and the “likeliest scenario is that Cambodia will be left on the backburner.”

“In the longer run, much will depend on how the new administration approaches Asia, and whether Cambodia—a second- or third-order priority for Washington—has a role in that,” Mr. Strangio said.

Having pledged to be a tough negotiator who makes better deals for the U.S., the greatest threat posed by Mr. Trump would be the possibility of new or altered trade deals that disrupt Cambodia’s garment sector, which continues to rely heavily on the U.S. market.

“The biggest possible danger for Cambodia is that an isolationist administration could rethink some of the trade preferences that have helped prop up Cambodia’s garment sector,” Mr. Strangio said.

For Prime Minister Hun Sen—who threw his support behind Mr. Trump last week, explaining that he was a businessman who would strive toward world peace—the next U.S. president would likely offer a breath of fresh air.

“For years, Hun Sen has been frustrated by the constant lectures by Western governments about how he runs his country, and the fact that Cambodia so often seems to be ‘singled out’ for criticism” over human rights violations, Mr. Strangio said.

“Now there’s a president-elect who has shown little interest in delivering these kinds of lectures.”

In his victory speech, delivered in New York at 3 a.m., Mr. Trump said his administration would “get along with all other nations.”

Mr. Hun Sen was quick to offer his congratulations to Mr. Trump in a message posted to Facebook along with a photo of himself on a golf course.

“At this moment the American voters have shown their choice to elect your excellency the same way as my support for your candidacy is not wrong either,” said Mr. Hun Sen, who chafed at those who lumped his endorsement together with dictators Kim Jong Un and Robert Mugabe.

In an official letter addressed to Mr. Trump, Mr. Hun Sen also said he hoped to work together “to enhance the great cause of peace, stability and prosperity of all peoples.”

“We aren’t sure yet about Donald Trump’s policies, but he’s better known as a businessman than a politician,” Mr. Eysan said, adding that the opposition CNRP may have lost a friend in the U.S.

“I believe there will be no change in the U.S. position and policy towards Cambodia, which continues to suffer from serious deficiencies in the respect for human rights, democracy, justice and rule of law,” Mr. Rainsy said in a press statement.

“With respect to U.S. foreign policy there are long-established guidelines and, at the top of the establishment, the White House—with the support of the Congress —always relies on a competent and experienced bureaucracy, including career diplomats from the State Department, to ensure stability and consistency.”

Some CNRP officials who hold U.S. citizenship said on Wednesday that they had supported Ms. Clinton, but accepted the will of American voters.

“Like the rest of the world, I’m ready to accept the result. Secretary Clinton fought very hard,” CNRP lawmaker Mu Sochua said on Wednesday. “In a democracy, the American people have spoken.”

“We hope that he will have a strong position on free and fair elections and the democratic process,” she said.

“She cares more about other countries,” he said. “No one knows what Trump’s positions are.”