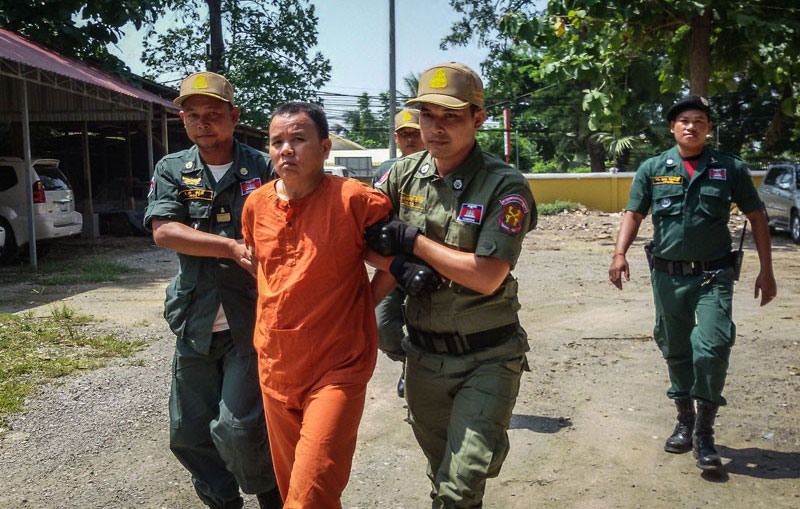 BATTAMBANG CITY – The trial of an unlicensed medic accused of infecting more than 270 villagers with HIV concluded Wednesday evening after five days of hearings at the Battambang Provincial Court, with a verdict in the case due in early December.

Authorities say Yem Chrin, 56, is responsible for a mass outbreak of the virus in Sangke district’s Roka commune that was first reported last December. Ten HIV-infected villagers have since died.

The prosecution has argued that Mr. Chrin—charged with aggravated murder, intentionally transmitting HIV and operating without a medical license—caused the epidemic by failing to replace his medical equipment between intravenous treatments, using infected syringes on multiple patients.

During closing arguments on Wednesday, deputy prosecutor Heng Luy asked the three judges hearing the case to find Mr. Chrin guilty on all counts and sentence him to the maximum term possible—life in prison.

Pointing to the testimonies of nearly 80 HIVinfected villagers, as well as seven health officials and public health experts, who took to the witness stand on the last day of the trial, Mr. Luy said it was clear that Mr. Chrin had knowingly infected those he treated.

Over the course of the fiveday trial, a stream of Roka residents infected with the virus told the court that they believed Mr. Chrin was responsible for their illnesses, as he was the only person to have ever provided them with med­ical treatment.

Some witnesses, including Loeum Lorm, 52, whose positive test for HIV set off December’s panic, added that they had seen the medic reuse syringes when administering injections to them.

“I suspect Yem Chrin infected the people with the HIV virus because when he used the syringe to inject me, the plastic packaging was open already,” Mr. Lorm said following his testimony last week.

When asked whether Mr. Chrin knowingly infected the villagers, as charged by the court, the victims were less sure.

Chi Sor, 45, who was the final villager to give testimony to the court Wednesday, said she was certain the medic was responsible for her infection.

“I was infected with HIV from Yem Chrin because he was the only one to treat me…and I never committed bad acts with another person,” Ms. Sor said by telephone after the trial.

Still, she acknowledged that she had no knowledge of intent by Mr. Chrin.

“I don’t know if Yem Chrin knew or not that he was infecting us with the HIV virus,” she said.

In addition to the testimony of the victims, the court called a num­ber of health officials and public health experts to the witness stand. They included Mean Chhi Vun, the former director of the National Center for HIV/AIDS, Dermatology and STD, who retired in February.

Provincial health department director Voeung Bunreth said during his testimony that he believed Mr. Chrin was responsible for the outbreak after examining the med­ic’s home during the initial investigation into the outbreak.

Contacted Wednesday evening, Roka commune health director By Beng Sor, who also gave testimony to the court, said he had accompanied Mr. Bunreth during the inspection of Yem Chrin’s home and also believed the medic was responsible for the outbreak.

“Yem Chrin didn’t have sanitation —even [on] his bed, he never changed or cleaned his mosquito net,” Mr. Beng Sor said.

The health center chief admitted, though, that this evidence alone was not conclusive.

“Until now, we do not yet have the specific evidence saying that Yem Chrin is the source of the HIV infection,” he said.

Mr. Chhi Vun, who is now an adviser to the Health Ministry, deflected questions from the judges regarding the specifics of the Roka case, offering only general information on how HIV could be transmitted.

He said that he was not aware of the results of sequencing testing conducted by the Institut Pasteur in Phnom Penh and the U.S. Centers for Disease Control in Atlanta on samples of the virus from Roka, which could prove that the virus was spread from a single source. Mr. Chhi Vun told the court that experts from the Institut Pasteur were more equipped to answer their questions.

Presiding Judge Yich Chhea­navy said the court would attempt to obtain those results from the Institut Pasteur. She said a verdict will be handed down on December 3.

Speaking outside the courtroom before his testimony, Mr. Chhi Vun said it was still too early to say definitively who was responsible for the Roka outbreak.

“Who knows at this point?” he said. “It’s hard to know if this outbreak was caused by this person or that person.”

In his closing argument, Em Sovann, Mr. Chrin’s lawyer, said the evidence presented to the court was not sufficient to convict his client on the charges laid against him, requesting that Judge Chhea­navy dismiss the aggravated murder charge, explaining that his client never “tortured” Roka’s residents, but rather hoped to help them.

In the trial’s final remarks, Mr. Chrin also requested leniency from the judges.

“I treated the people honestly. I did not have any intention to infect them with HIV, so I request the judge reduce my sentence because I need to meet with my children, my wife and my elderly mother,” the defendant told the court. “I need to make money to feed my family.”