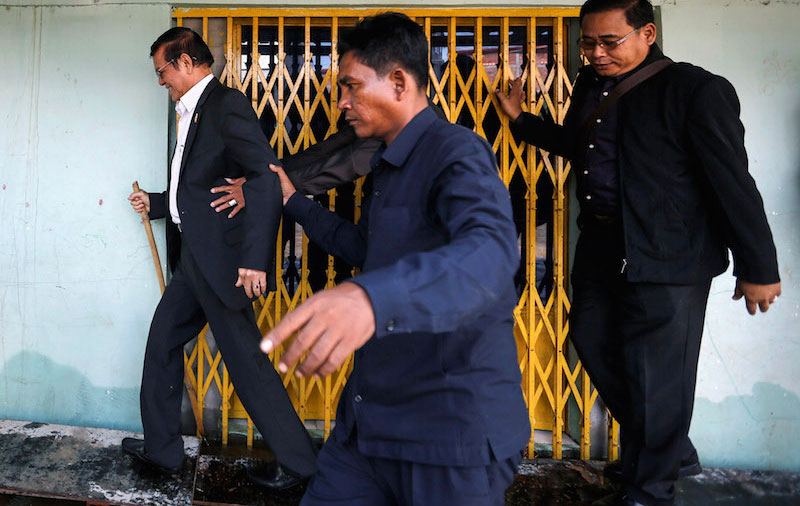 Sokha Back in Hiding at Party HQ, But Why?

For about an hour on Wednesday, deputy opposition leader Kem Sokha left his hideout in the CNRP’s headquarters for a whistle-stop journey to register on new voter rolls.

It was the first time he left the premises since armed police showed up there on May 26 seeking his arrest over charges of refusing to appear in court, eventually leaving empty-handed.

But there was no effort to arrest him on Wednesday, and authorities have said he will remain free until appeals have been heard in his case.

The situation has left many asking why Mr. Sokha, the most popular opposition figure in the country, is back in hiding.

CNRP spokesman Yim Sovann said the party still feared for the security of its acting president.

“We did not feel safe yet. That’s why he returned to stay at the party headquarters,” he said. “We are still in doubt about the situation.”

Before Mr. Sokha became entangled in a “prostitution” case involving an alleged mistress, which now has him facing five months in prison, he was regularly meeting with supporters throughout the country, giving fiery speeches about the need to use coming elections to take power from a ruling party whose time had passed.

The government has not tried to hide its distaste for his scathing rhetoric. Explaining last year’s decision by the CPP to remove Mr. Sokha from his position as National Assembly vice president, ruling party lawmaker Cheam Yeap said that his speeches attacking the government violated the Constitution.

“Whenever he goes somewhere he creates chaos, which affects the peace, and that’s prohibited by the 1993 Constitution,” Mr. Yeap said at the time.

With the threat of arrest and prison time now hanging over his head, analysts said on Thursday that Mr. Sokha’s return to the headquarters was likely due to a sincere concern that he would not be allowed to remain free if he returned to public life—as well as some political maneuvering.

“He returned to CNRP HQ for the same reason that he didn’t go register to vote in Kompong Cham, his normal place of registration, and, oh, didn’t give a big speech at a political rally there either: the possibility of five months in jail awaits,” said Sophal Ear, an associate professor of diplomacy and world affairs at Occidental College in Los Angeles.

“The cat is in a bad mood; do you think the mouse wants to come out and play? Only if the mouse wants to be caught and get eaten. Staying in CNRP HQ is far preferable, condition-wise, to Prey Sar [prison]. We can all agree on that,” he added.

Lee Morgenbesser, a research fellow at Australia’s Griffith University who has studied elections in Cambodia, said he believed Mr. Sokha’s decision to return to the CNRP headquarters was a political tactic, albeit one with limitations.

“For the CNRP, Sokha staying in the headquarters represents a political tool that draws far greater domestic and international attention to the deplorable state of competitive party politics in Cambodia,” he said in an email.

“The problem, however, is that the moderation of the CNRP has repeatedly failed to yield tangible benefits for bringing about democracy in Cambodia,” he added. “It’s unclear how much can be achieved by this strategy.”

Despite the bad publicity, Mr. Sokha’s self-imposed exile has its benefits for the ruling party, Mr. Morgenbesser said.

“For the government, Sokha staying in the HQ allows them to contain his movement and reduces the overall costs of their repression. It is a far better alternative to him rousing support for the CNRP. This will remain the case for some time.”

While Mr. Sokha is trying to reinforce perceptions that the ruling party is suppressing democracy, his decision to briefly leave the headquarters this week may play into the government’s hands, said independent political analyst Ou Virak.

“There’s the boycott of the National Assembly, the opposition leader in exile and the deputy is holed up in the office—that narrative will create a sense of crisis and the government is trying to create a different kind of narrative, but it doesn’t work,” Mr. Virak said.

Allowing Mr. Sokha to make a brief trip out on Wednesday showed that the government wanted “the best of both worlds,” he added.