Use of riel notes in the economy has surged in the first half of the year, central bank figures show, but businesses and analysts remain skeptical about government initiatives to move Cambodia away from the U.S. dollar.

The National Bank of Cambodia (NBC) injected about 2 trillion riel in cash notes—the equivalent of approximately $489 million—into the economy during the first six months of the year, an 18 percent rise from about 1.69 trillion riel, worth about $413 million, for the first half of last year, according to data obtained on Thursday.

The surge was led by increased use of riel in paying for taxes, wages and goods and services, as well as its use in banking, particularly in microfinance, said NBC director-general Chea Serey.

Cambodia’s economy remains predominantly dollar-based—with 84 percent of economic transactions conducted in the U.S. currency, according to a central bank estimate —but the government has repeatedly pushed for a transition to the Cambodian riel, partly to give the central bank monetary tools if economic intervention is needed.

“The demand for riel banknotes for economic activities in all municipalities and provinces…has increased remarkably…which is reflected in the growth rate of money transfers from National Bank of Cambodia’s headquarters to all branches,” said an NBC biannual report released this week.

Ms. Serey said the demand for riel was being supported by official policies, including the central bank maintaining a stable exchange rate between riel and dollar, the bank promoting the use of riel to businesses and the public, and the government encouraging tax payments in riel.

NBC has published booklets to promote the riel, particularly for youth, and has pushed businesses to quote their prices and pay wages in riel, Ms. Serey said.

The central bank’s biannual report also notes that 47 of the more than 100 companies that are members of the Young Entrepreneurs Association of Cambodia (YEAC) plan to switch their payrolls to riel. Nine other members have already done so, the report says.

Nevertheless, many in the private sector remained skeptical about moving the economy away from the dollar.

Chann Veasna, CEO of local accountancy firm APV—a YEAC member—said his company would not yet be switching to paying wages in riel because staff members said they needed dollars to pay for everyday living costs.

“We have had a meeting with our staff to talk about that, but they said they did not want to be paid in riel yet,” Mr. Veasna said.

Most goods imported from abroad were also being paid for using dollars, meaning the company would have to navigate currency exchanges if it were to use riel internally and with customers, he said.

He said he expected firms like his would be saddled with losses if they tried to do so, because private companies “do not have the expertise to manage exchange rates.”

“Where it can be slightly problematic is when a firm has all of its revenue in U.S. dollars, but then wants to do salaries, for example, in riel,” Mr. Higgins said. “To do this, it needs to exchange money each month, which adds an extra step in the process.”

Shifting the Cambodian economy to the riel can only be a gradual process, he said.

“We are certainly seeing greater usage of riel across Cambodia for transactional usage, particularly larger denomination notes which are replacing smaller denomination U.S. dollars. For loans and savings however, I don’t think there have been any major changes.” Mr. Higgins said.

He suggested that the NBC could prohibit commercial banks from disbursing dollar notes of $5 denominations and smaller to accelerate the adoption of riel in everyday transactions.

“The important thing to bear in mind is that this is a long-term project of the NBC,” Mr. Higgins said. “Cambodia will not de-dollarize overnight, and will likely take at least a generation.” 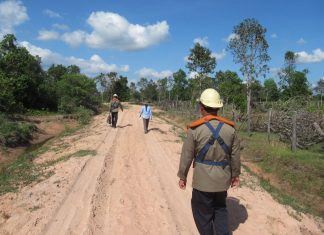 By
Matador Network
-
April 7, 2020
0
We are bounding down a hardpan dirt road an hour southeast of Siem Reap, Cambodia. I have to pee, my jaw hurts from the truck bouncing over the ruts, and we’re heading to a place that could get any one of us killed. I’m increasingly unsure I want to be here.

Damming the Mekong to environmental hell