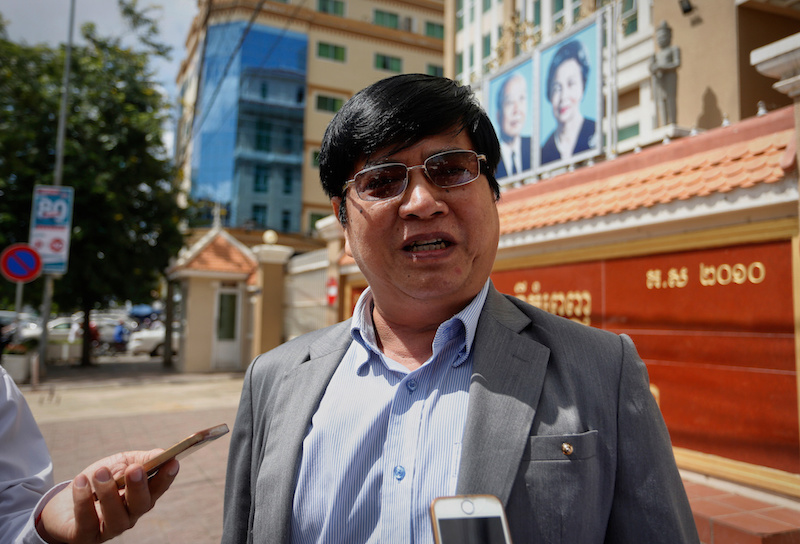 Mr. Hun Sen’s Facebook page has seen a surge in support over the past year from accounts in countries including India and the Philippines, where “click farms”—companies that sell fake social media popularity—are known to operate.

Phnom Penh Municipal Court Judge Im Vannak focused his decision, however, on whether Mr. Rainsy’s supposed smoking gun, a text message from government minister Som Soeun to other party officials, had been deliberately misconstrued by the opposition leader.

“The act of the defendant Sam Rainsy, who wrote and posted on his Facebook page on March 9, 2016, had the intention of making the public misunderstand and believe it as truth,” he told the court. “It is a form of placing blame with bad faith, affecting the honor and the dignity of the victim.”

Judge Vannak also said the decision would be broadcast for three days through the media, though it was not immediately clear how this would be enforced. The director of state-run TVK said he had not received any information about the decision and had never heard of such an order.

The message at the center of the case, sent by Mr. Soeun through the Telegraph smartphone app, instructs officials to take various measures to push CPP members to increase the likes for Mr. Hun Sen’s page and decrease those for Mr. Rainsy.

The directive tells officials to increase the popularity of Mr. Hun Sen’s page by discussing it at all party meetings, telling friends and organizing “working groups” to increase the number of accounts that like the page.

“All levels of the party must follow up, examine and carry out this task as part of a broad, local campaign leading to victory in the elections,” the message concludes.

In additional comments posted along with a screenshot of the leaked message to Mr. Rainsy’s Facebook page, the CNRP president made the claims that were deemed defamatory, saying that civil servants and security forces had been ordered to produce fake Facebook likes.

Mr. Rainsy, who has been officially exiled from Cambodia, on Tuesday defended his assertion.

“In a communist-type system where the party and the state actually form one entity, you can read between the lines when it comes to instructions from the party,” he said. “‘Creating technical groups’ to help ‘boost Hun Sen’s likes’ implies countless possible ways and tricks to achieve the CPP’s goal.”

Asked if he had intentionally misled the public about the actual contents of Mr. Soeun’s message, Mr Rainsy said: “No, it’s Hun Sen who misleads the public when he boasts about his (fake) popularity on the basis of his (fake) Facebook likes.”

“I will appeal today’s court decision because this will give me the opportunity to ask, for the sake of justice, the U.S.-based Facebook Company to provide factual and neutral data and information about the veracity and authenticity of Hun Sen’s likes,” he added.

Speaking to reporters outside the courtroom, Mr. Soeun said that justice had been served, but declined to say whether Mr. Hun Sen’s spike in likes was legitimate.

“It is a problem for Facebook, the company,” he said of the likes, adding that Mr. Rainsy was simply a sore loser, having been surpassed by the prime minister in online popularity.

“It is no different from his losing the election. He blamed the National Election Committee for rigging the ballots,” he said. “It is a way to eliminate the shame of his failure.”

However, despite releasing a five-page report in March rejecting accusations that Mr. Hun Sen had bought Facebook likes, the government has done little to explain why the prime minister saw a sudden surge in online popularity from a few specific countries known to host click farms.

The Phnom Penh Post initially called attention to the geographical oddities among Mr. Hun Sen’s Facebook followers. An article published on March 9 showed that in the previous month, only 157,331 of about 779,000 new fans on Facebook had accounts based in Cambodia. Most of the new likes came from India, the Philippines and Burma.

Though that trend has slowed, it has not stopped, and the current breakdown of Mr. Hun Sen’s 6.1 million Facebook likes—Mr. Rainsy has 3.3 million—shows remarkable international appeal, based on analytics from the website SocialBakers.

Only 51 percent of the accounts that like the page, “Samdech Hun Sen, Cambodian Prime Minister,” are based in Cambodia.