Phnom Penh governor Pa Socheatvong and three provincial governors are set to be replaced and become advisers to the government, according to a royal decree signed over the weekend, making way for the country’s first female provincial governor to be appointed in Koh Kong province.

But while observers lauded the appointment of Mithona Phouthorng in Koh Kong, they remained skeptical about any positive reform in Phnom Penh under the leadership of Khuong Sreng, who is being promoted from deputy governor. 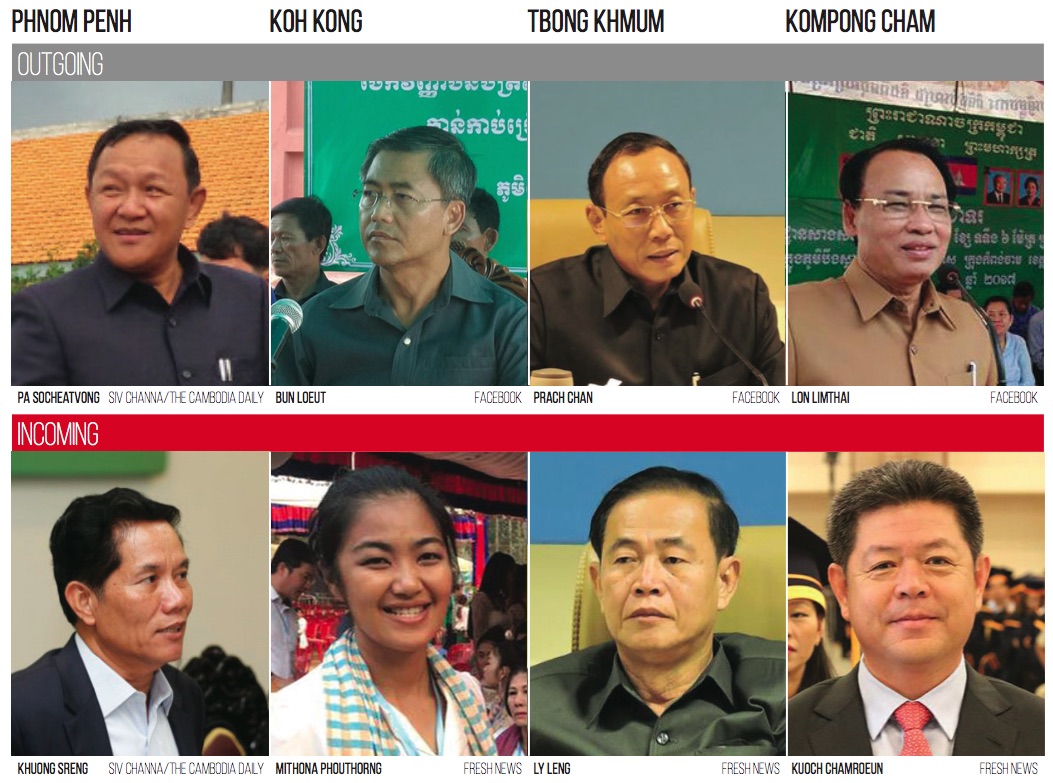 While Tbong Khmum governor Prach Chan, Kompong Cham governor Lon Limthai, Koh Kong governor Bun Loeut and Mr. Socheatvong would step down from their roles due to their age, they would remain paid advisers of the government, CPP spokesman Sok Eysan said on Sunday.

Mr. Eysan said he was unaware when the role transfer would take place, but that the Interior Ministry would make the announcement soon.

Interior Ministry spokesman Khieu Sopheak could not be reached for comment.

Ms. Mithona’s promotion “can bring a lot of hope among people in Koh Kong province,” said political analyst Cham Bunthet, who is from the province.

“A lot of young people there are very optimistic about the leadership of that young lady” and her openness to new ideas.

Ms. Mithona, the 38-year-old granddaughter of former provincial governor Say Phouthorng, said she was selected to be a member of the provincial council before being appointed as deputy governor in the middle of last year and was excited at the opportunity to lead change in the province.

“I am very proud that the government appointed me as the provincial governor in Koh Kong province. I have pledged to do a better job to serve the people in the whole province,” she said, adding that strengthening legal procedures would be a key focus of her leadership efforts.

As the first female governor in the country, the relationships Ms. Mithona builds with fellow officials will be important, said Ros Sopheap, executive director for NGO Gender and Development for Cambodia.

“This is a really good opportunity, but this is the first time that the government has appointed a young woman…. It’s really important how much she gets allies to support her,” Ms. Sopheap said.

Back in Phnom Penh, resolving issues within the urban poor communities would be an important focus for Mr. Sreng in order to rebuild relationships between villagers and the local government, said Eang Vuthy, director of Equitable Cambodia, a local NGO that helps evictees.

“It’s time for them to build confidence and trust among the people—especially the poor,” he said. Following through on recent promises for land titles would show that the government was committed to improving society, he added.

Mr. Sreng said he had seen the royal decree but declined to comment further.

The new appointment in Phnom Penh was a missed opportunity for the ruling party ahead of next year’s general elections, Mr. Bunthet said.

“It’s not good for the CPP. If they want to win the 2018 election, they should appoint someone young with more energy; new ideas; with a good reputation in the city so they can lead and build trust.”

The ruling party needs someone who can “transform the minds of voters,” he said.