The comments appeared to be directed at The Cambodia Daily, which on Tuesday published an article about a meeting between Mr. Hun Sen and Japanese Prime Minister Shinzo Abe on the sidelines of the Asia-Europe Meeting in Mongolia on Saturday. 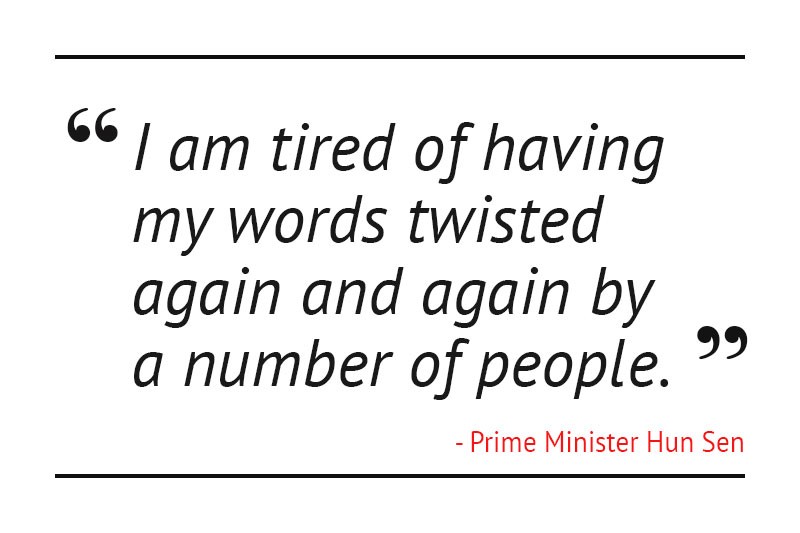 Drawing from a statement released by Japan’s Ministry of Foreign Affairs, the article reported that Mr. Abe told Mr. Hun Sen he judged an international tribunal verdict invalidating China’s sweeping territorial claims in the South China Sea to be “final and binding.” Parts of the waters are also claimed by the Philippines, Vietnam and other countries in the region. The story called Mr. Abe’s words an “apparent rebuke” of Cambodia’s position on the sea.

Just days after Cambodia refused to join other Asean nations in issuing a statement in support of the verdict, China pledged to furnish the government with more than half a billion dollars in aid through 2018—one of the largest grants ever awarded to Cambodia.

Speaking during the inauguration of a Japanese-funded water and sanitation project in Battambang province on Thursday, Mr. Hun Sen said that a local newspaper had misrepresented his conversation with Mr. Abe in Mongolia.

“It’s a bit sad​ that my meeting with Prime Minister Abe, between friends who have worked together, that a local newspaper in Phnom Penh—maybe Your Excellency Kumamaru already saw it—your excellency doesn’t read Khmer but that publication prints both a Khmer and English version—stated that Abe blamed Hun Sen,” he said.

Mr. Hun Sen said there was no need for him to respond to the article given that government spokesman Phay Siphan had already done so—an apparent reference to a critical Facebook post written by Mr. Siphan.

The premier then called on Mr. Abe and Ambassador Kumamaru to assess the article.

“I will let Your Excellency Kumamaru clarify, because I am tired of having my words twisted again and again by a number of people,” he said.

Naoaki Kamoshida, a counselor at the Japanese Embassy, reiterated that during his meeting with Mr. Hun Sen, Mr. Abe emphasized the “importance of rule of law and the Arbitral Tribunal’s award being final and legally binding.”

“While Prime Minister Abe stated Japan’s positions described above, he had no intention of criticizing Prime Minister Hun Sen on the issue,” Mr. Kamoshida added.

Michael Green, Japan chair at the Washington-based Center for Strategic and International Studies, said it was unlikely that Mr. Abe directly rebuked Mr. Hun Sen over Cambodia’s stance on the sea dispute.

“I do suspect, though, that the Japanese government was disappointed by the Cambodian position, and I am sure PM Abe would have explained in detail to PM Hun Sen why Japan’s interests are directly impacted by the South China Sea issue,” Mr. Green said in an email on Thursday.

Ian Storey, a senior fellow at the Institute of Southeast Asian Studies in Singapore, said the South China Sea was a particularly sensitive subject for Mr. Hun Sen.

“The Hun Sen government bristles at accusations that its position on the South China Sea is a quid pro quo for Chinese economic aid,” he wrote in an email.

“As always, Hun Sen can thumb his nose at donors because he knows he can always rely on China for economic largesse.”