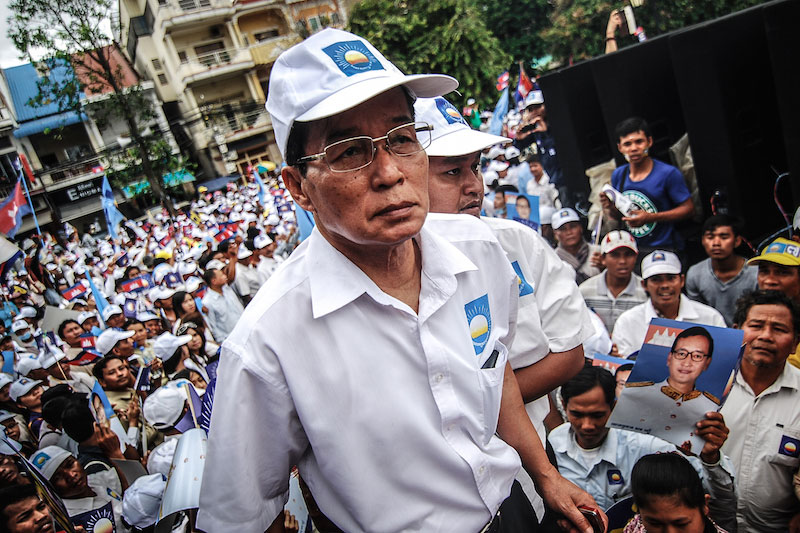 Pen Sovann, Cambodia’s first prime minister after the Khmer Rouge and to some a “father” of the rebel forces that helped topple them, died on Saturday at the age of 80 after a storied if rocky political life.

In a statement on Sunday, the opposition CNRP, which he joined in 2012, said he died at his home in Takeo province just after 7 p.m. on Saturday following a long fight with high blood pressure and diabetes. He suffered a stroke last year that left the right side of his body paralyzed.

A lifelong Marxist branded with a fervent nationalism growing up under the thumb of colonial France, Pen Sovann maintained to the end that the only trouble with socialism was with the people who tried—unsuccessfully—to put it to practice. Sidelined at the height of his career in 1981 when he was arrested as prime minister for bristling at the control of the Hanoi government that installed him, and mostly forgotten during a decade in exile, Pen Sovann returned to Cambodia Lazarus-like in the 1990s and enjoyed a minor political comeback in his final years as a lawmaker for the CNRP.

Historian David Chandler said Pen Sovann was a “genuine patriot” who would nonetheless be overshadowed by a history of his time that will inevitably focus more on the Khmer Rouge and what he called the “new” Cambodia.

Largely, he said, because it is the winners who write it.

“He is sidelined because his arrest, his detention in Vietnam and what happened later are best forgotten according to those in power,” Mr. Chandler said.

Pen Sovann had been the first prime minister of the newly formed Kampuchean People’s Revolutionary Party for less than six months when he was arrested in December 1981, having fallen out of favor with Hanoi, which effectively controlled the country until the end of the decade.

According to Evan Gottesman’s “Cambodia after the Khmer Rouge,” Pen Sovann said Hun Sen, who would be handed his post four years later, was there with Vietnamese authorities to read the charges, which included “narrow-minded nationalism” and a tax on Vietnamese airplanes. As Pen Sovann saw it, he was punished for trying to keep Le Duc Tho, Hanoi’s chief adviser to the government, to his promise to stay out of Cambodia’s internal affairs, according to an interview he gave the Center for Research on Globalization in 2013 for a brief biography.

He was promptly deported to Hanoi and spent the next 11 years in prison and under house arrest.

Pen Sovann had by then lived through “much of the worst and most violent moments of modern Cambodian history” and “played a central role in Cambodian left politics,” wrote Luke Young, the brief biography’s author.

Born on April 15, 1936, in Takeo province into a large family of subsistence farmers, Pen Sovann said he watched their modest means evaporate as a child when the French tore their father away and conscripted him into the life of a coolie.

Hard set against colonial rule, he joined the nationalist Khmer Issarak movement as a 14-year-old in 1950 in its guerilla war against the French and served as a bodyguard to Ek Chhoeun, who would go on to become the feared Khmer Rouge commander Ta Mok. When the force was demobilized by the Geneva Conference in 1954, he was among the “Hanoi 1,000” who left Cambodia for Vietnam for training and indoctrination.

There, in 1958, he joined the Khmer People’s Revolution Party, which morphed into the Communist Party of Kampuchea—or Khmer Rouge—eight years later, and returned to Cambodia in 1970, recruited to help relay radio broadcasts out of Hanoi.

It was then, he told Mr. Young, that his ideological break with the movement began over policies he considered anathema to Khmer culture.

“For example, not allowing the monks to fast as part of their Buddhist calling, forcing people to eat together in groups and not calling your mother and father ‘mother’ and ‘father,’ but having to call them ‘friend mother’ or ‘friend father.’ Ridiculous!” he said. “Those things do not fit with Khmer customs, and the things that were not according to Khmer customs, the real heart of the Khmer, I was against.”

Pen Sovann formally broke with the regime in 1974 and soon returned to Vietnam, where he worked at cobbling together fellow Khmer Rouge defectors like himself. In 1978, he became a founding member of the Kampuchean United Front for National Salvation. After Vietnamese forces helped the Front topple the Khmer Rouge on January 7, 1979, he quickly rose through the ranks until his arrest in 1981.

After his sudden release and return to Cambodia in 1992, Pen Sovann jumped back into politics, lending his support to a number of opposition parties and for a few years running his own, the National Sustaining Party.

CNRP lawmaker Yem Ponhearith said on Sunday that Pen Sovann eventually joined him and deputy opposition leader Kem Sokha at the Human Rights Party in 2007 as a deputy president. The Human Rights Party merged with the Sam Rainsy Party in 2012 to form the CNRP, and Pen Sovann won a National Assembly seat as an opposition lawmaker for Kompong Speu province in national elections the next year.

“The death of Pen Sovann is the loss of a Khmer politician who was a real nationalist,” Mr. Ponhearith said. “Even though he received training from a neighbor country, he loved Cambodia.”

Mr. Rainsy, the CNRP president, took to Facebook on Sunday to hail him as a “father of January 7” and “a patriot who struggled to defend the interests of the Khmer people under the hardest conditions.”

Those sentiments find little favor with the government, which was born out of the puppet regime that raised Pen Sovann to prime minister only to knock him down.

Thirty-five years after his arrest, Sok Eysan, a spokesman for Mr. Hun Sen’s ruling CPP, still accused the ex-premier of having “a narrow outlook.”

Mr. Eysan maintained that Pen Sovann had to be arrested in 1981 for his opposition to Vietnam’s occupation and Hanoi’s K-5 project which, in a bid to keep Khmer Rouge rebels at bay, turned Cambodia’s border with Thailand into what remains one of the most densely land-mined strips of land in the world.

“He caused trouble and could have put the people in danger. That’s why we could not let him remain prime minister,” Mr. Eysan said. “If we did not arrest him, that genocidal regime would not have been destroyed.”

For his part, Pen Sovann considered his final years in opposition politics an extension of the fight against colonial forces, accusing the CPP of continuing to let Vietnam have its way with Cambodia.

In an interview with The Cambodia Daily in 2013, he said: “I joined the party to rescue the nation again…. The CNRP is rescuing the country from the absolute power regime, from Vietnam’s hand and from corruption.”

That same year, in his interview with the Research Center’s Mr. Young, Pen Sovann said his early faith in Marxism had also survived.

“I can say that he analyzed history correctly, but the ones who used it as a means for seizing power used it destructively,” he said. “[T]hose who attempt to implement their version of socialism practice it incorrectly. Most importantly, if the leadership uses it properly, then they will have the support of the people.”

Sok Umsea, a fellow CNRP lawmaker from Kompong Speu, said Pen Sovann was cared for by his adopted daughter, Pen Suthea, in his final years.

In his 2002 autobiography, Pen Sovann said he married a Vietnamese woman in 1965 and had three children—two daughters and a son—but was forced to divorce his wife and leave his family in 1983.

Mr. Ponhearith said the party would open its headquarters in the capital to mourners who cannot travel to Takeo for the funeral ceremonies. The CNRP hopes to cremate Pen Sovann’s body on Sunday at Phnom Penh’s Wat Botum park. The government is not likely to oblige.