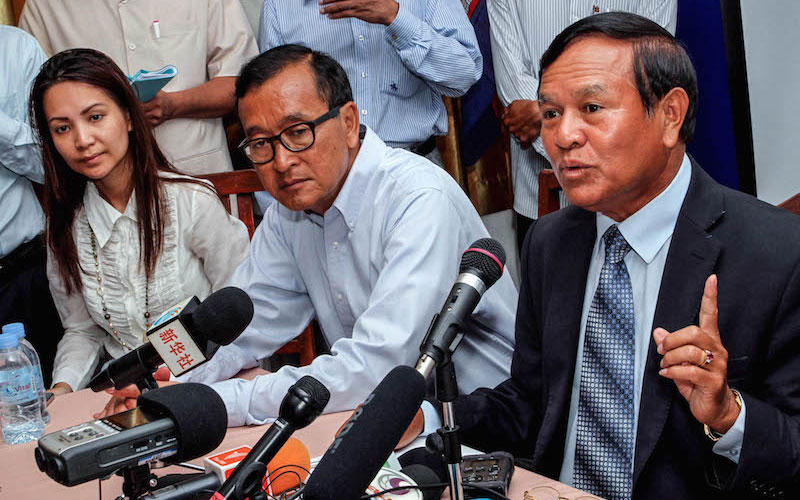 During the three years since being shaken by the shockingly close 2013 national elections, Prime Minister Hun Sen has toyed with the splits and vulnerabilities within the CNRP, his only real political challenger.

A year ago this month, opposition leader Sam Rainsy stood before supporters in South Korea and vowed to return to Cambodia “even if I die.” To the surprise of few, he quickly changed his mind and returned to his safe haven in Paris to avoid a two-year prison sentence.

The government was soon on the attack against Mr. Rainsy’s deputy, Kem Sokha, who became embroiled in a frantic investigation into a supposed affair with a 25-year-old hairdresser. Refusing to publicly acknowledge the allegations, Mr. Sokha faced down arrest threats and was sentenced to five months’ prison time for failing to show up in court for questioning. He remains free pending appeal.

Just as senior members of the CNRP were starting to put pressure on Mr. Rainsy to return to Cambodia, the government declared late last month that he was barred from coming back, a move that contradicts the constitutional rights of citizens to re-enter the country.

It also escalated an already uncertain situation for the CNRP as it prepares for its first local elections as a united opposition next year, and a national election in 2018 that it hopes will propel the party into power.

Although Mr. Sokha is the party’s acting president, and a potential prime ministerial candidate if Mr. Rainsy is not pardoned and allowed to return for elections, the opposition leader said this week that he remained the only legitimate competitor against Mr. Hun Sen.

“For sure I have to be back before the July 2018 legislative elections to prevent those elections from being meaningless,” Mr. Rainsy said in an email. “Can you imagine one boxer only on a boxing ring who would be pretending to win a match without facing his only real challenger?”

Lee Morgenbesser, a research fellow at Australia’s Griffith University who specializes in electoral politics in Southeast Asia, said the decision about who would lead the CNRP in the general election would ironically be decided by its adversary.

“I think Sokha has to take on the role of de facto leader. Given how centralised leadership is within the CNRP, Rainsy’s exile leaves few alternatives that are satisfiable to both factions. In any case, I don’t think Rainsy will tolerate Sokha lead[ing] the opposition into the next election,” he said.

“Strangely, however, who leads the party then will actually be determined by Hun Sen.”

The ruling party could take one of two routes regarding how to deal with the opposition leaders, Mr. Morgenbesser said.

“I think one of two things are going to happen. They will allow Rainsy back into the country immediately before the next general election, thereby denying him the opportunity to organise and lead the CNRP. This strategy would suggest they care just enough about how the election is perceived—internally and externally—to make it competitive,” he said.

“Alternatively, Rainsy is out for good and the CPP is moving towards a strategy of really non-competitive elections. This strategy would produce widespread criticism, but be backed by the likes of China,” he added.

“Given the benefits and costs of these alternatives, I would bet good money on the first strategy.”

However, the Economist Intelligence Unit, the research and analysis division of The Economist Group, wrote last month that the government’s hard pivot toward China meant that a change of heart over Mr. Rainsy’s return seemed “unlikely for the foreseeable future.”

“While Hun Sen might previously have been concerned about burnishing the legitimacy of past elections, strong—and unconditional—Chinese backing has made him and his regime increasingly dismissive of Western concerns. Despite this, Sam Rainsy appears to remain hopeful that foreign pressure will force Hun Sen to back down and let him return ‘in one way or another,’” the unit wrote in an article on the impact of Mr. Rainsy’s exile.

“In the meantime the CNRP will remain shackled, led by its vice-president, Kem Sokha, who, since May, has been confined to the party’s headquarters, and also faces potential arrest if he emerges.”

As its long-term prospects hang in the balance, the CNRP has recently seen rare public discord. Kem Monovithya, a senior party official and the daughter of Mr. Sokha, mocked Mr. Rainsy in a number of tweets last month for his failure to come back to Cambodia. Prince Sisowath Thomico, a prominent party official, last week threatened to leave the CNRP if divisions within the party are not addressed.

Ou Virak, director of the Future Forum public policy think tank, said that internal conflicts within the CNRP, which was founded in 2012 through a merger of the Sam Rainsy Party and Mr. Sokha’s Human Rights Party, were inevitable.

“The party is always in crisis,” Mr. Virak said. “It’s a marriage of convenience, of necessity, and it’s not yet a strong party. These things that have now been made public had always been there since the day the party was created, so it doesn’t change much.”

Mr. Virak said the public spats could ultimately benefit the party depending on how the leadership reacted.

“If Sam Rainsy responds by being a man who cannot accept criticism, then this is not the leader that anybody hoped for,” he said. “If he responds by strengthening the party system and allows some different opinions and approaches while keeping the common vision alive, then I think that could only strengthen the party in the long run.”

Sophal Ear, an associate professor of diplomacy and world affairs at Occidental College in Los Angeles, put the recent discord down to “eager-beaver children of the politicians wanting a promotion for papa.”

A genuine split in the party, however, would only result in one winner, he said.

“The CPP’s strategy has always been to divide and conquer. Right now, it’s send one away, keep one under office arrest. The result is to clip CNRP’s wings by any means necessary and thereby get all the unfair advantage they can get,” Mr. Ear said in an email.

“The moment they split, the original supporters of SRP and HRP will also split, sending the children every which way, and that will destroy the CNRP, plain and simple.”

Mr. Rainsy said that while criticism was accepted in the CNRP, unity remained of paramount importance.

“The CNRP is a democratic party where there is freedom of expression and dissent is accepted. But at the end of the day, when it comes to the party as a whole making a final decision on any issue, unity always prevails with the party presenting a united front,” Mr. Rainsy said.

“Unity is crucial in winning the next elections and it would be silly to fall into Hun Sen’s trap that consists in dividing Sam Rainsy from Kem Sokha.”