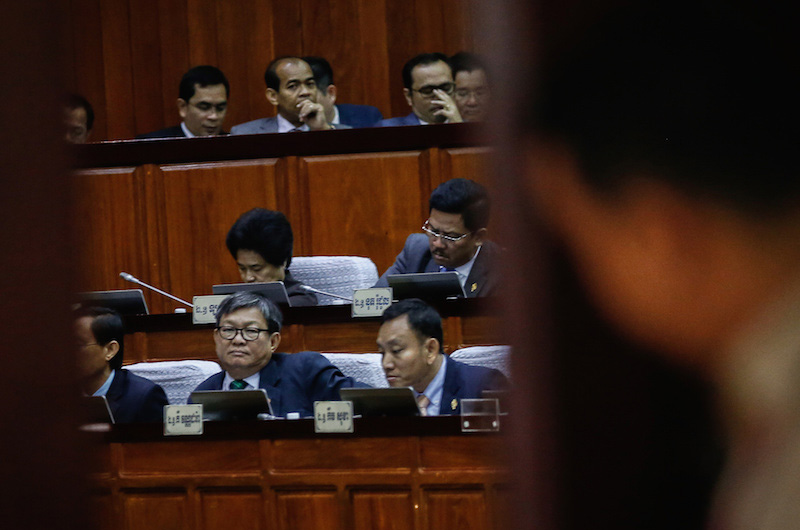 The ruling CPP used its slim majority in the National Assembly to push through next year’s national budget on Tuesday, despite pointed questions and complaints from the CNRP, whose lawmakers chose not to vote in protest.

“Spending for the 2017 budget is in response to the priorities and needs of the various ministries and institutions to achieve their policy objectives,” senior CPP lawmaker Cheam Yeap said.

Echoing a persistent opposition complaint, however, CNRP lawmaker Son Chhay argued that the government’s priorities were still out of step with the country’s needs, noting that neighbors Thailand and Vietnam spend much more on education than Cambodia as a share of their gross domestic product.

“The spending doesn’t respond to the needs of priority sectors such as education and health, but the defense sector keeps increasing,” he said.

Mr. Yeap explained that next year’s budget increase was being helped by a projected 16.7 percent jump in government revenue to about $3.91 billion, driven by a 20.2 percent leap in tax collection to $1.48 billion.

Speaking with reporters after the Assembly session, however, Mr. Chhay complained about the amount of borrowing the government was doing to shore up its spending plans.

“We see that spending is almost $5 billion, but the spending relies on borrowing almost $1 billion, so the budget is still not balanced,” he said.

He blamed part of the deficit on the government’s failure to collect the fees owed by the country’s many economic land concessions, large tracts of land leased out to private companies usually for growing crops.

Clear-cutting in and around the concessions, often located inside healthy, protected forest, has led to Cambodia suffering one of the highest rates of forest loss in the world over the past 15 years. Much of the timber is smuggled to China and Vietnam.

CNRP lawmaker Eng Chhay Eang challenged the minister, claiming he knew of a dozen concessions in Stung Treng province alone that still owed the government a total of $11 million in overdue fees.

He also brought up the fact that Vietnamese customs data show more than $100 million worth of timber imports from Cambodia so far this year, despite a blanket ban Cambodia placed on timber exports to Vietnam in January.

Also replying to an opposition concern, the finance minister said that the government was working on a pension scheme for private sector employees, to accompany the one that already exists for civil servants.

The CNRP last week said Mr. Sokha was planning to attend the day’s session at the Assembly, which the opposition had been boycotting since police tried to arrest him in May for ignoring court orders to present himself as a witness in the prostitution case of an alleged mistress.

Mr. Sokha has since been convicted for ignoring the orders and sentenced to five months in prison; he remains holed up inside the party headquarters fearing another arrest attempt while he appeals.

On Tuesday, CNRP spokesman Yim Sovann said the vice president decided to skip the session because the “political solution” the opposition is hoping to strike with the CPP to get the court cases against him and other party lawmakers and supporters dropped has yet to materialize.

“He wants the solution,” Mr. Sovann said. “But there was no solution from the other side.”

The CPP says it has no ability to drop the charges even if it wanted to, though it has done so on several occasions in the past in exchange for concessions from the opposition.