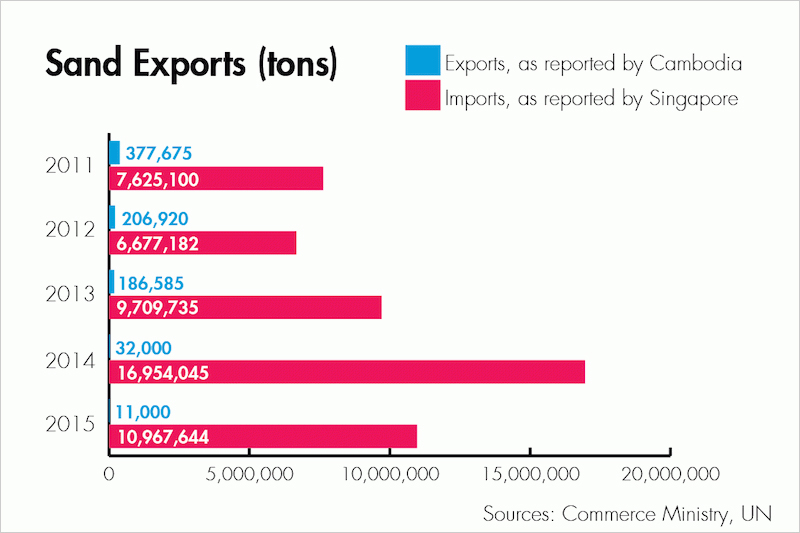 Ministry Blames ‘Ineffective Practices’ for Over $400M in Missing Sand

Cambodia is overcoming “ineffective practices” and should not be held to the standards of developed countries, a Commerce Ministry spokeswoman said on Tuesday amid renewed calls for the government to investigate over $400 million in unrecorded sand exports to Singapore.

Records from the Ministry of Commerce show Cambodia exporting 814,580 tons of sand worth roughly $1.67 million to Singapore from 2011 to 2015. But Singaporean records reported to the U.N. Commodity Trade Statistics Database document the sand-hungry city-state importing almost 52 million tons worth $404 million over the same period from Cambodia, leaving more than $400 million unaccounted for.

Cambodia’s claims for 2011 are also contradicted by a document uploaded to the Ministry of Commerce website that appears to derive from the Singaporean Ministry of Trade and Industry reporting that the island imported $115 million worth of sand from Cambodia that year, compared to the $707,843 that Cambodia reported exporting there.

Environmentalists and non-governmental groups say Cambodia’s sand industry is poorly regulated and that supplies come from illegal dredging, which damages both local ecosystems and the livelihoods of riparian communities.

Asked on Tuesday to explain the more than $400 million, 51 million-ton difference in sand figures over 2011 to 2015, Ministry of Commerce spokeswoman Soeng Sophary said it was unfair to hold Cambodia to the standards of more developed countries.

“If you look at Cambodia through the current practices and performance of the developed countries, you might find it difficult to understand Cambodia actual situation,” she wrote in an email.

Ms. Sophary referred further questions to the Ministry of Mines and Energy and the Finance Ministry’s general department of customs and excise.

Dith Tina, a spokesman for the Ministry of Mines and Energy, said his ministry was still working to investigate the disparity.

“We don’t have the exact figure for sand exports and my staff is now working to calculate the figure,” Mr. Tina said.

“I wonder why everyone thinks the ministry sold sand,” he added. “We just prepare the market economy for the private sector and the government just charges a royalty” of $0.6 per cubic meter of sand for companies exporting it.

“To fight corruption, we will call the minister for the Ministry of Mines for answers to why there is a difference between the figures recorded by Singapore and by Cambodia,” he said. “It differs a lot…and caused losses worth dozens of millions of dollars in income.”

A group of 41 civil society organizations also called on the government to explain the contradicting data in a letter signed by representatives of the Cambodian Center for Human Rights, Mother Nature and Transparency International Cambodia, among others.

“We, the undersigned CSOs, are deeply concerned that the livelihoods and human rights of affected communities continue to be adversely affected by sand dredging in Cambodia,” the letter says, calling on the government to publish in full all environmental impact assessments and updated figures related to dredging.

Alex Gonzalez-Davidson, the director of Mother Nature, an environmental group that has often campaigned against what it says is illegal dredging, said there was little doubt what the government was trying to hide.

“The companies, which in reality are no more than criminal syndicates working hand in hand with powerful government officials, declare a tiny portion of the actual sand exports,” he wrote in an email on Tuesday.

“This allows them to make vast amounts of profits, which of course must be shared with those in government who provide ‘protection services’ to them. The aim of ignoring our repeated requests for an explanation on this huge gap is simple: to see the story eventually dying off so that the sand mining proceeds unobstructed and the money keeps flowing in.”

Correction: A quote from Dith Tina, spokesman for the Ministry of Mines and Energy, was incorrectly translated in a previous version of this article. Mr. Tina said the government charges a royalty on sand exports, not that it takes a commission from sales.