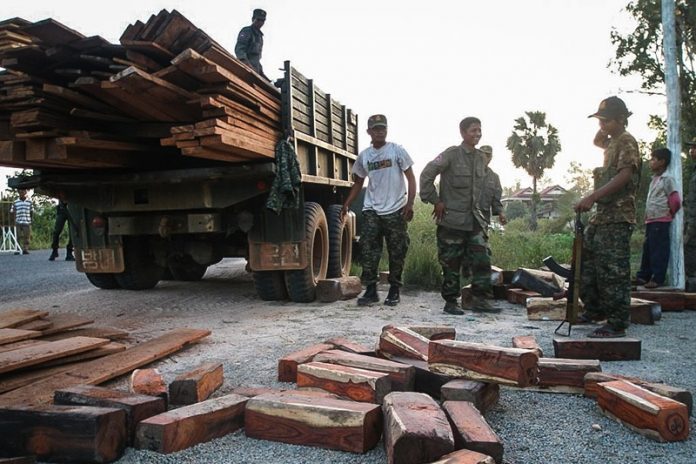 On the morning of March 28 in the northwestern province of Oddar Meanchey, just a few miles from the Thai border, 10 soldiers stormed the Forestry Administration’s head office in Anlong Veng district, their guns drawn.

The soldiers, from Division 2, Platoon 243, of the Royal Cambodian Armed Forces (RCAF), were not after criminals. According to the Forestry Administration’s local division chief, Khorn Khem, they were the criminals, come to take back a platoon truck he had seized the week before for illegally transporting a haul of timber through the district. After a five-hour standoff with the unarmed forestry officials, the soldiers eventually left empty-handed.

The military police, meant to check such military abuse, say they won’t investigate the raid because no one was hurt and brushed it off as a “misunderstanding.”

But the tug-of-war between Cambodia’s military and its other security forces, including its unarmed and ill-equipped forest rangers, over the country’s disappearing trees is an old one. Low-level police and forestry officials have been ignored, threatened and robbed by soldiers and military police suspected of defending their piece of the country’s illegal logging trade. Some have died. In November, a soldier was one of seven suspects arrested over the recent fatal shooting of a forestry ranger on an overnight patrol for illegal loggers in Preah Vihear province, but no one has yet been charged for the crime.

Marcus Hardtke, who has worked with a number of forest and conservation groups in Cambodia since the mid-1990s, said the military and illegal loggers have effectively established a “symbiotic” relationship, each side relying on the other.

“The illegal business needs the muscle to protect their interests and to operate with immunity, while the guys with the guns make partnerships like that [as] part of their revenue stream,” he said.

No group has done more to expose the cozy relationship between the armed forces and loggers than Global Witness, the London-based environmental protection group.

In 2005, it released “Taking a Cut,” a damning report—promptly seized by the government—detailing a network of state institutions and top security officials greasing a thriving illegal logging trade in the Phnom Aural Wildlife Sanctuary. It names a number of military units and ranking officers whose soldiers were seen logging illegally or moving illicit timber out of the area, and says the military police—under the command, then as now, of General Sao Sokha—provided protection down the supply chain.

In 2007, it released “Cambodia’s Family Tree,” another report—also seized by the government—accusing several officials and their kin of operating a vast illegal logging syndicate. It calls the army’s Brigade 70 a “nationwide timber trafficking service” moving ill-gotten logs across the country.

A 2015 report by Global Witness, “The Cost of Luxury,” accuses a Brigade 70 major general of working hand-in-hand with timber magnate Try Pheap to loot protected forests in the country’s east. When The NGO Forum on Cambodia published a similar report based on its own investigations a few months later, the government threatened to sue the group if the document was not watered down.

Mr. Hardtke said the military’s role in the timber trade has waned since the 1990s, when logging companies had military units assigned to them, often putting large areas in the provinces out of bounds for anyone else. It prompted the country’s foreign donors to encourage the government to beef up the Forestry Administration as a check on the abuse.

“Nowadays the armed forces are still an integral part of the illegal logging and timber transport system, but their operations are less obvious and on [a] smaller scale,” he said, attributing much of the military’s ongoing tension with the Forestry Administration to localized “turf wars.”

The armed forces, Mr. Hardtke said, “still operate with near immunity in many provinces, as long as a relationship with other government agencies is maintained. Depending on strength and higher-level connections, turf wars between [the Forestry Administration] and the military occur, typically not in logging areas but at checkpoints where fees are negotiated.”

Such turf wars have also cropped up between military units themselves. In June last year, a military officer in eastern Mondolkiri province claimed that his soldiers were holding four illegal logging suspects when soldiers from neighboring Kratie province arrived and freed them at gunpoint. Two months later, again in Mondolkiri, armed military police freed four suspected illegal loggers and their trucks from the custody of district police; provincial police said the military police had been moonlighting as security guards for a local rubber plantation.

And yet a special task force set up by Prime Minister Hun Sen in mid-January to go after illegal wood stocks in the eastern provinces has so far completely ignored the army and all other security forces.

Ouch Leng, who heads the Cambodian Human Rights Task Force, an NGO that has done its own investigations into the illegal logging trade, said it was sure to stay that way.

“The [government] task force has not dared to investigate them because they are afraid of losing their jobs or going to jail if they take action against any illegal loggers who have strong support from high-ranking government officials,” he said.

Global Witness was doing just that until the government dropped the group as the country’s official independent forest monitor in 2003; it has had to operate here clandestinely after its staff were denied entry in 2005 and its assistant country coordinator was put on a one-way flight to Thailand. A French group took over from Global Witness as the country’s official monitor in 2003, but the arrangement did not last and the government has not had another since.

Almost exclusively, the new government task force has been pursuing only private timber traders, sawmill operators and the owners of large plantations. The man put in charge of the operation is Gen. Sokha, the military police commander implicated in the illegal timber trade by Global Witness.

Eng Hy, a spokesman for both the National Military Police and the task force, declined to comment on why the unit was not pursuing security forces.

“You don’t understand at all,” he said, before hanging up on a reporter.

Defense Minister Tea Banh, who oversees the military, said he knew nothing about the RCAF troops who raided the Forestry Administration office in Oddar Meanchey this past week and denied that soldiers were transporting illegal wood across Cambodia on a regular basis.

“I don’t think that this information is true because our authorities are deployed across the country to stop illegal loggers,” he said. “If you know something, why don’t you tell the authorities?”

Forestry Administration director-general Chheng Kim Sun said he knew of Monday’s raid in Oddar Meanchey only through the media and, like the defense minister, denied that his rangers ever clashed with soldiers over illegal timber.

“It’s just the newspaper, but from the reports from my staff, it’s no,” he said. “I know what my staff report to me. I am in the office, like you.”

Mr. Hardtke said any nominal crackdown in Cambodia would only provide temporary relief at best, given what he described as the virtual institutionalization of the illegal logging business—“an alternative forest management scheme, hidden in plain sight.”

He said the latest operation could weaken the link between the loggers and military if it took some of the money and timber out of the system, but that he still expected confrontation between competing government agencies to pick up.

“The armed forces, especially in the provinces, are opportunists, and the logging frenzy that the [plantations] and associated sawmills have created has given them an environment to thrive,” he said. Even so, he added, “competition over the diminishing timber resources will lead to more conflict and violence between military, state agencies like [the Forestry Administration], and local people.”