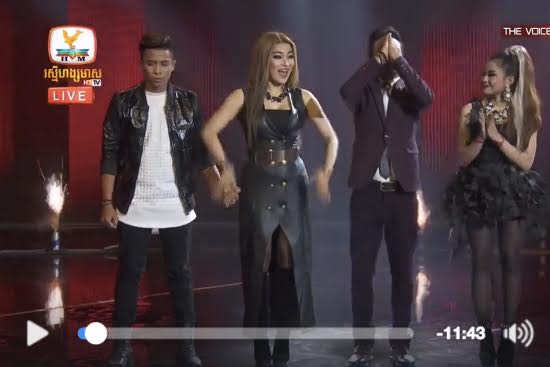 It was the closing minutes of the second season of The Voice Cambodia, and Cambodians across the country were glued to their screens, watching confetti rain down on the finalists’ carefully coiffed hair.

As winner Thel Thai shot the cameras a pinched smile and accepted his $25,000 loot, 19-year-old law student Kheng Ratha sat in her Phnom Penh apartment near O’Russey market on Sunday night, watching the spectacle on her smartphone.

“I live in a rented apartment, and there is no TV, so I watch shows and news with my laptop or smartphone,” Ms. Ratha said on Monday, adding that the premier’s page offered unfiltered insight.

“I think his page is now a news channel that we can use to get messages from him directly, not from other officials’ mouth,” she said.

As the prime minister’s Facebook fandom has grown—he now claims over 4.4 million likes, up from two million in January—so too has the diversity of his Facebook offerings.

Average-Joe photographs of Mr. Hun Sen—on a beach, a golf course, an airplane, at home, or just about anywhere he goes—and policy edicts are now regularly interspersed with streaming speeches, the national football team’s matches, the day’s most popular TV shows and patriotic songs, all stamped with a slick “SPM” (Samdech Prime Minister) logo.

The prime minister’s investment in online video content shows just how seriously he is taking a platform that he only embraced in September, when he announced that a Facebook page bearing his name was in fact his after years of denial.

It may also threaten the longtime Facebook supremacy of the opposition CNRP, which successfully used the platform to galvanize young voters in the run-up to the 2013 national elections. Opposition leader Sam Rainsy has been broadcasting daily news updates on his Facebook page ever since.

And while the CNRP has already launched online television stations to expand its audience online—attempts by the party to establish a terrestrial station have run into roadblocks it says are politically motivated—Mr. Hun Sen appears intent on getting ahead.

Speaking to graduating students of the Royal School of Administration in Phnom Penh on Monday, the prime minister bragged that viewers from as far away as Tokyo had streamed The Voice from his page.

“My Facebook will become a Facebook page and an online site,” he told the students, adding that Hang Meas HDTV had given his social media team permission to stream the show.

“Now we have [a] studio and also play songs,” he added. “My Facebook is a peaceful Facebook for development and joy, not a Facebook for insulting.”

The streaming content is the latest prong in what Mr. Hun Sen described in February as a new “electronic government” that uses “all networks—including the fastest network—to solve issues for citizens.”

Plans for an airport expressway and a driver’s license requirement for drivers of 125cc motorbikes were both scrapped after social media outcries earlier this year.

Opposition leader Sam Rainsy has for months accused Mr. Hun Sen of falsely bolstering his Facebook following by buying “likes” from “click-farms”—centers that create fake accounts to increase online popularity—in India and the Philippines, claims supported by statistics showing an inexplicable number of followers coming from those countries.

Asked about Mr. Hun Sen’s new streaming service on Facebook, Mr. Rainsy pointed to data from social media analytics site SocialBakers.com showing that less than 57 percent of the premier’s followers had accounts in Cambodia, compared to 82 percent for the opposition leader.

“The real competition rests on the substance of the programs’ content (not their breadth) and the values they carry,” Mr. Rainsy wrote in an email on Saturday. “I regularly publish historical, economic and social documents and analyses related to facts that the CPP does not want the public to know about.”

“Because through all kinds of politically-motivated bureaucratic harassment the CPP is blocking us in our building a traditional TV station, we are developing Internet TV programs with appropriate means,” Mr. Rainsy added.

“For young people in Cambodia, spending time to watch TV at home is like a traditional style as now most of them scroll to watch instant videos in their smartphones while they are with ​their friends, at work, [or] hanging out,” Mr. Ritthy wrote in an email on Sunday.

The prime minister’s social media team “tries to produce a lot of youthful contents and enthusiasm” in the hope it will translate into support in upcoming elections, he added.

Kounila Keo, a media consultant with a master’s degree from the Lee Kuan Yew School of Public Policy in Singapore, agreed.

“To me, this page is apparently being made into ‘a one stop shop for all things Cambodia,’” Ms. Keo wrote in an email on Monday. By experimenting with different types of content and engagement, Mr. Hun Sen “can test or find out whether social media such as Facebook can really sway public opinion towards him.”

However, social media strategy alone could only take the prime minister so far, she said. “What Cambodians…want to see are not just ‘nice regular or sophisticated posts’ but action [and] better policies towards business and trades, law enforcement, reduction in poverty and corruption.”