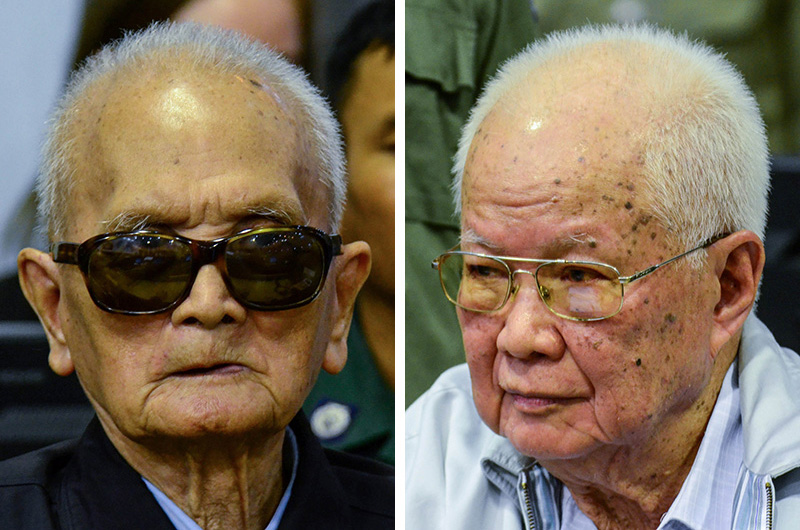 Staring ahead with stone-faced expressions, Khmer Rouge leaders Nuon Chea and Khieu Samphan on Wednesday became the first senior regime leaders to have been handed a final guilty verdict for their roles in crimes committed during Pol Pot’s reign of terror in the 1970s.

After being found guilty of crimes against humanity by the Extraordinary Chambers in the Courts of Cambodia’s Trial Chamber in August 2014 in the first phase of the case against them, both defense teams filed lengthy appeals and the Khmer Rouge leaders were still legally presumed innocent until a verdict was reached by the Supreme Court Chamber.

Nuon Chea, 90, Pol Pot’s second-in-command, and Khieu Samphan, 85, the regime’s head of state, were seeking a reversal of the judgment and a complete acquittal. Khieu Samphan also requested a reduction in his sentence if his appeal against the judgment was rejected.

While the tribunal’s Supreme Court Chamber, in a decision read out by its president Kong Srim, upheld the life sentences against the pair, it also scrapped numerous decisions made by the trial chamber in its initial decision, including multiple convictions.

In the end, the Supreme Court concluded that “the massive scale of the crimes, the complete lack of consideration for the ultimate fate of the Cambodian population” and “the significant roles of the accused” meant “that the imposition of a life sentence for each of the accused is appropriate.”

The majority of the Trial Chamber’s findings were upheld, namely convictions for crimes against humanity including murder, persecution on political grounds and other inhumane acts in relation to the evacuation of Phnom Penh after the Khmer Rouge took control of the city in 1975. The case’s second phase, in which the two former leaders are on trial for other crimes including genocide, is ongoing.

Judge Srim said the Trial Chamber was wrong in its finding that the crime of extermination was committed during the forced evacuation of hundreds of thousands of people from Phnom Penh as there was no clear evidence of direct intent.

“Due to the weakness of the evidence before the Trial Chamber, it was not possible to extrapolate that killings occurred on a mass scale,” Judge Srim read.

The conviction for extermination relating to the second distinct phase of population transfers was also scrapped for reasons including that the “Trial Chamber’s findings could not establish that the perpetrators acted with direct intent to kill on a large scale.”

Despite confirming that at least 250 soldiers and officials from the previous U.S.-backed Khmer Republic had been killed in Pursat province’s Tuol Po Chrey site at the end of April 1975, it was found that there was not enough evidence to prove the existence of a policy to kill all soldiers from the former regime.

The fact that most of the evidence consisted of out-of-court statements, considered to have “low probative value,” along with the Trial Chamber’s failure to take into account evidence “which [calls] into question the existence of a blanket policy to kill,” led the decision to be overturned.

“Accordingly, the accused cannot be held criminally liable for the crimes against humanity which were committed at Tuol Po Chrey,” the judge said.

The appeal ruling also criticized the Trial Chamber on decisions that were upheld, including the failure to call National Assembly President Heng Samrin, a former mid-ranking Khmer Rouge soldier, to testify. However, Judge Srim said the claim by defense teams that the failure to call Mr. Samrin and CPP Senator Ouk Bunchhoeun resulted in a “grossly unfair outcome in the judicial proceedings” had not been established.

Speaking on the grounds of the court after the verdict, David Scheffer, the U.N.’s special expert on the tribunal, lauded the case’s conclusion and compared it to the Nuremberg trials that convicted high-ranking Nazis of war crimes shortly after World War II.

“This is really the first Nuremberg moment of this court and there will be a second Nuremberg moment when the final judgment in the second phase of this case against Khieu Samphan and Nuon Chea is delivered in the future,” Mr. Scheffer told reporters.

Leaders of the Islamic State militant group, along with countries including North Korea and the Philippines, should be aware that the “long arm of international justice” could “ultimately reach their domain,” he said.

International co-prosecutor Nicholas Koumjian also said that the trial of Nuon Chea and Khieu Samphan was “clearly the most important trial at least since Nuremberg involving the most horrendous crimes since the Second World War.”

He conceded, however, that he was disappointed at the decision to overturn numerous important rulings in the case.

“Similar to an election, sometimes you might not like the result, but if you believe in the rule of law then you accept that institutions are independent and they may reach results that any one of the parties is not particularly, 100 percent, pleased with,” Mr. Koumjian said.

“While I may not agree with all of the details, I think the ultimate result and a life sentence in this case is justice.”

Despite voicing support for the reversal of numerous decisions, defense lawyers were still scathing about the appeal process—and the court in general—following the verdict.

“I’ll begin by saying, we look at the quarters of this tribunal today,” said Anta Guisse, international defense counsel for Khieu Samphan. “The doors were repainted; we made this tribunal beautiful so people could come in their lovely suits in order to attend this announcement so we can look at the appeal judgment, but we’d like to say that we have seen this cosmetic justice.”

Ms. Guisse said the overturned decisions made little difference because the life sentence was upheld.

“People will say that these are simply words of a bitter defense, but, actually, no, we are lawyers and issues of law are essential,” she said.

Victor Koppe, international defense lawyer for Nuon Chea, said he was “pleasantly surprised” by the conviction reversals and said he hoped it could have knock-on effects on the second phase of Case 002, in which the aging defendants are on trial for crimes including genocide.

“One of our main complaints in Case 002/01 and especially in Case 002/02 is that the standard of accepting proof on certain events is so incredibly low,” Mr. Koppe said.

“That bar has been raised now extensively, which I believe could have a substantial impact on running Case 002/02, most particularly the genocide charges because the evidence there is very sketchy and anecdotal. I think the prosecution is not going to be very happy with that.”

Asked whether he had changed his mind over comments he made in a video last week branding the appeal “irrelevant,” Mr. Koppe said his opinion had become “a bit milder.”

“The thing is: What impact will it have on the judges in the Trial Chamber? I have said on many occasions that they are deeply biased, incompetent,” he said.

“Will they take to heart what the Supreme Court Chamber has said? That would mean a complete change of everything.”