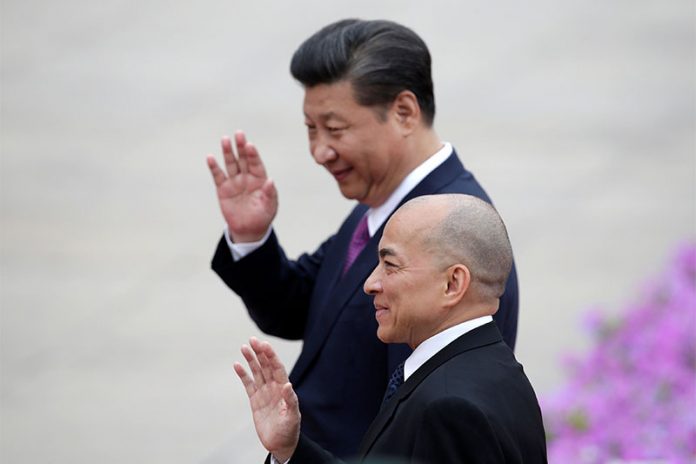 King’s Letter Does Not Call for Fraud Probe

Claims by the government that King Norodom Sihamoni explicitly requested an investigation into a petition from the CNRP submitted to the Royal Palace this week appear to be fictitious, as a copy of the letter from the king was made public on Friday.

The letter to Prime Minister Hun Sen, signed by King Sihamoni on Tuesday, informed the premier that the Royal Palace received the petition from the opposition party on Monday. The request for an investigation into possible fraud was written by Mr. Hun Sen in the margins of the letter.

Explaining the decision to ask the Interior Ministry to investigate nearly 200,000 thumbprints collected by the CNRP in support of a petition asking for the king to intervene in the current political crisis, Council of Ministers Secretary of State Sou Phi­rin said on Wednesday that the idea came from the Royal Palace.

“The letter we issued refers to the Royal Palace letter, and the suggestion to do the examination and research was from the Royal Palace,” he said of a letter he signed on behalf of the Council of Ministers and sent to the Interior Ministry.

However, no such suggestion appeared in King Sihamoni’s letter to the prime minister.

“Utmost respect and most profound love to Samdech Akka Mo­ha Sena Padei Techo,” the letter begins. “I have received a letter dated 30 May 2016 from lawmakers of the CNRP and documents from the people with 173,144 thumbprints, asking for my intervention.”

“I would like to send this letter to Samdech Akka Moha Sena Padei Techo, Prime Minister of the Kingdom of Cambodia, for review,” it said, before concluding with the king offering “assurance of my highest regards.”

In handwritten notes on the margins of the letter, Mr. Hun Sen ordered Interior Minister Sar Kheng to inspect the petition and accompanying thumbprints.

“Samdech Kralahorm Sar Kheng, Please manage to have these thumb­prints researched through: 1. Examination 2. Conducting research into the people directly 3. Other means to authenticate them,” one note said.

“[P]lease, Samdech, manage to have them researched most thoroughly to prevent the use of the thumbprints to cheat both the people and especially the king,” read another.

Reached by telephone on Friday, Mr. Phirin, the secretary of state, hung up on a reporter. Council of Min­isters spokesman Phay Siphan said he could not comment on his colleague’s behalf.

“He’s the prime minister; he has the mandate to do anything in his competence to explain to the king. He wants to make sure they don’t lie to the king,” he added.

However, Prince Sisowath Tho­mico, a prominent member of the royal family who sits on the CNRP’s steering committee, said King Sihamoni’s letter was a perfunctory message to the prime minister and did not indicate a desire for a special investigation.

“It’s very literal, and each time the king receives a request, he handles it the same way. There is nothing that shows the king wants the government to investigate or anything like that,” Prince Thomico said.

Nonetheless, the Interior Ministry is pressing ahead with a nationwide investigation into the veracity of the thumbprints, according to ministry spokesman Khieu So­pheak, who said a special committee formed to carry out the probe would soon begin work.

“The thumbprint committee, they will authenticate them, one by one. In the provinces, authorities will check them directly with the people,” General Sopheak said. “They have equipment to examine thumbprints, but I am not sure what it is because the National Police are working on it—please ask them.”

On Thursday, the interior minister ordered the formation of a committee to be headed by National Police Commissioner Neth Savoeun and comprised of top officials including the police chiefs of each of the country’s 24 provinces.

Koul Panha, head of the Committee for Free and Fair Elections, said the investigation was a poor use of state resources, particularly police officers.

“I don’t understand. It never happens in a democratic country like that. They do surveys, but they never go to investigate the people like that,” he said. “I think this is a threat to the people. It’s not a good form of government.”

“I hope they will not do this widespread investigation into the thumb­prints. It’s a lot of work and right now the Ministry of Interior should be focused on getting identification cards for the people,” he said.

King Sihamoni, an apolitical monarch who rarely makes public remarks, is currently on a short visit to China, and is expected to return over the weekend.