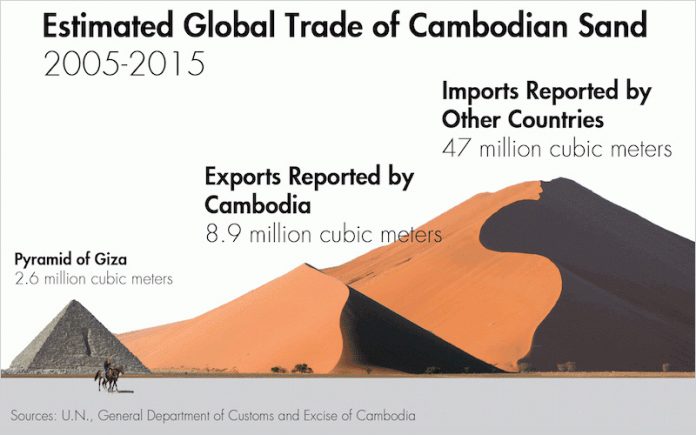 Illegal sand dredging has been eradicated from Cambodia, but reforms are still needed, the Ministry of Mines and Energy said on Wednesday, facing mounting blowback over sand export records that differ by tens of millions of cubic meters from those kept by the U.N.

“We completely eradicated lawless sand dredging of the river and sea and have collected more than $7 million in tax revenue from sand businesses from June 2015 to present,” the ministry said in an unsigned letter posted to its Facebook page. It added that the industry “still faces some challenges.”

From 2005 to last year, countries across the world reported importing more than 75 million metric tons of Cambodian sand to the U.N. Commodity Trade Statistics Database, or roughly 46.8 million cubic meters. But statistics from the Finance Ministry’s general department of customs and excise show just 14.3 million tons leaving the country, about 8.9 million cubic meters.

A group of 41 civil society organizations issued a letter on Tuesday calling for the government to explain the discrepancies, while the opposition CNRP has threatened to summon Mines and Energy Minister Suy Sem to the National Assembly to explain them.

In its response on Wednesday, the ministry called on civil society to “provide any additional data that may be available to help the Ministry…determine the exact cause of the difference between the two data…. The ministry is thoroughly reviewing and carefully examining the details” of the statistics.

“The Ministry of Mines and Energy has already taken steps to temporarily suspend the issuance of new licensing and sand exporting by companies by requiring companies to provide documents that are necessary to strengthen our effectiveness in controlling the sand businesses and sand exporting,” it said.

Alex Gonzalez-Davidson, the director of Mother Nature, an environmental NGO that has campaigned against what it says is illegal dredging, was not convinced that the ministry was sincere.

“If the Ministry wants people to believe they are sincere about such cooperation, first and foremost they should go to the coastal communities ravaged by the sand mining and see the impacts by themselves, something they have never done once since this scam started in 2008.”

Preap Kol, director of Transparency International Cambodia, was a signatory to the letter from the NGOs and repeated its call for the relevant ministries to “disclose information immediately so that the public can see the truth.”

“Although there have been some big promises of deep reforms, the pace of reforms have been extremely slow and are often hampered by resistance from those who do not want to let go of the status quo due to personal interests,” he said.

“I do not expect the current scandal over these discrepancies to change what are already negative perceptions,” he wrote in an email.

“The scandal will only serve to reinforce these views on the country’s economic figures, while raising more eyebrows over the extent of corruption in the industry.”