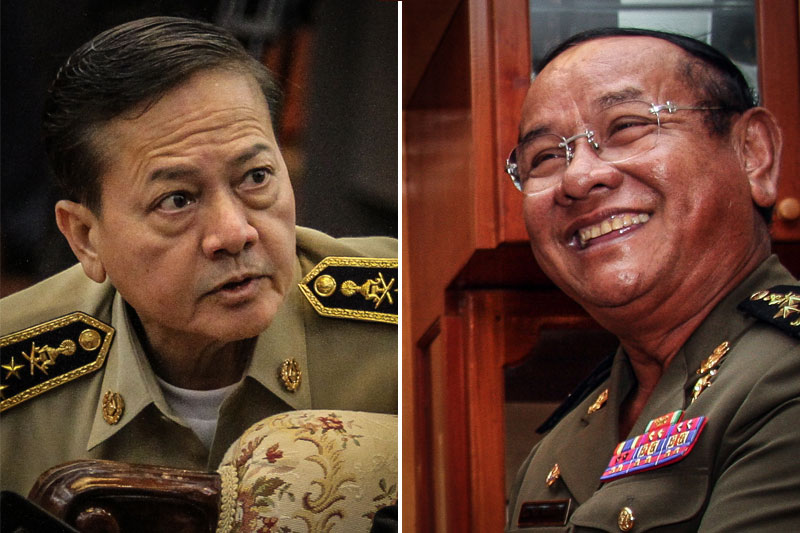 A future CNRP government would face a powerful backlash if it attempted to replace CPP loyalists Pol Saroeun and Neth Savoeun as the commanders of the military and National Police, Prime Minister Hun Sen warned Monday.

In his latest threat of civil strife or outright war if the opposition party wins the 2018 national election, Mr. Hun Sen told a graduation ceremony in Phnom Penh that the CNRP had been disingenuous in pledging not to sack any state employees if it comes to power.

“Their policy message is: ‘Keep the old officials and give them a pay raise,’” Mr. Hun Sen said. “Then, the [CNRP] supporters who sold their cows, buffalos and even sold their dogs to help the party, where will the jobs be for them?”

“If you keep the old, the new ones cannot enter,” he said, predicting that the people who currently support the opposition would complain about not getting positions after “struggling almost to death” to bring the party to power.

“Then if they dare to touch Neth Savoeun and Pol Saroeun, these groups will bring in their forces and react,” Mr. Hun Sen warned. “Even the provincial governors will react… and [say] ‘Why didn’t you keep your promises?’

General Saroeun and General Savoeun, who are both members of the CPP’s powerful standing committee, lead the Royal Cambodian Armed Forces and the National Police, respectively.

Over the past month, the prime minister has repeatedly warned of civil war and violence if the CNRP wins the 2018 election, comparing opposition leader Sam Rainsy’s plans for Cambodia with those of Pol Pot in the 1970s.

Mr. Rainsy’s plans for a tribunal to try cases of tycoons suspected of grabbing land from villagers has in particular raised Mr. Hun Sen’s ire, and Monday the premier again warned of an “internal war” if the CNRP were to enact the plan.

“The internal war will erupt,” he said. “The war will occur and do not claim that I’m threatening, because [you] sent such a message.”

Neither Gen. Saroeun nor Gen. Savoeun could be reached for comment.

Mr. Rainsy said by email from France that he believed the premier’s threats of civil strife if the CNRP removed either general were underhanded.

“These continuous warnings and threats are meant to frighten the population not to vote for any political change. They seem to reflect an electoral panic on the part of those who issue them,” Mr. Rainsy wrote. “The CNRP wants to engage in national issues, not personal issues.”

“The danger is there. Everybody recognizes it’s a risk, and it goes to show how Hun Sen has failed terribly to push for a civilian government, because unless the military takes orders from politicians, we don’t have democracy,” Mr. Virak said.

“Unless that is guaranteed, Hun Sen has failed completely at institution building, so he’s basically admitting he’s been using the military to support the ruling party,” he added.

“It shows that he has planned for the military to be partisan and on his side even during all of these elections.”

The idea that the army would remain loyal to the CPP in the event of a CNRP victory has been alternatively disputed and hinted at by CPP leaders in recent years.

Deputy RCAF commander Chea Dara stated in July that the “army belongs to the Cambodian People’s Party,” drawing rebuke from other military and CPP leaders who stressed the independence of the armed forces.

CNRP lawmaker Son Chhay, a longtime advocate of military depoliticization, said he did not believe replacing army leaders would cause problems for the CNRP so long as it did not try to assert its own influence over the military.

“Even if we saw the prime minister’s son becoming commander in chief of army, we would respect that. He has the ability and all the skills to improve the image of the army,” Mr. Chhay said, referring to Hun Manet, the present head of the Defense Ministry’s counter-terrorism department.

“This could balance it out if there were concerns about a new government using its powers to take revenge over the old government,” Mr. Chhay added.

“I personally think that if that was the case, Hun Manet could be a good commander of the armed forces—as long as he is willing to work to reform the army on a more professional basis.”