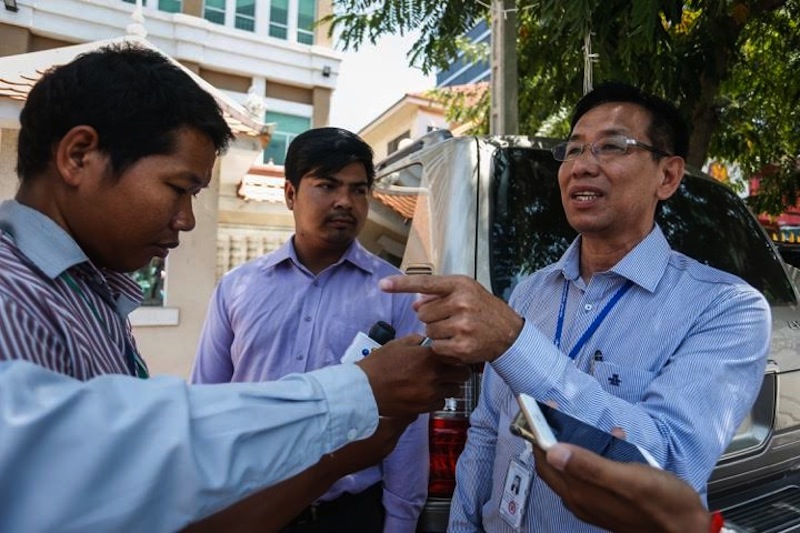 On Sunday, a CPP spokesman accused Ms. Lany of defamation. Mr. Tech would not name the alleged crime on Monday, but said the prime minister was seeking a mere 100 riel in compensation, or about 2.5 cents.

The text of the complaint filed on Monday, however, raises the prospect of a far more serious charge of incitement, claiming that Mr. Rainsy’s posts might “anger people and could provoke social chaos.”

“The important thing is that [Mr. Hun Sen] wants to be cleared of blame,” Mr. Tech said. “The second thing is honor. Her Excellency Thak Lany and Sam Rainsy twisted the truth, and that affects the honor of [Mr. Hun Sen] and the honor of the government.”

The prime minister has disavowed responsibility for Kem Ley’s murder, but his denial appears to have done little to reverse widespread public opinion that the government was behind it.

The popular political commentator was gunned down inside a Phnom Penh convenience store on the morning of July 10. The man arrested for the shooting claims to have been taking revenge for a $3,000 loan Kem Ley was refusing to pay back, but many appear to be convinced that it was his frequent—sometimes biting—criticism of the government that did him in.

The day of the shooting, Mr. Rainsy took to his Facebook page to call it “another act of state terrorism.”

He used his page again on Monday to double down on the accusation.

Mr. Rainsy did not reply to a request for comment on Monday, and spokespeople for the opposition could not be reached.

The complaint against Ms. Lany stems from a speech she gave to opposition supporters in Ratanakkiri, her home province, on Friday.

In a video of the event posted online the next day by the CPP-friendly Fresh News service, the senator can be heard saying that Mr. Hun Sen “shot at Kem Ley” for speaking out about allegations of corruption against his family.

Ms. Lany could not be reached on Monday.

On Sunday, however, she denied having accused the prime minister of ordering the hit and claimed the audio of the recording had been edited to make it sound as though she had.

The senator said she would send a reporter the full recording to prove her claims, but has yet to do so. She said that the full recording had been posted to her Facebook page, but as of Monday night it did not appear to be there.

The complaint against Mr. Rainsy is the third defamation case to embroil the opposition leader in the past year.

In November, the municipal court issued an arrest warrant for Mr. Rainsy over a years-old conviction for defaming then-Foreign Minister Hor Namhong in 2008, prompting him to decide not to return from a trip abroad he was taking at the time.