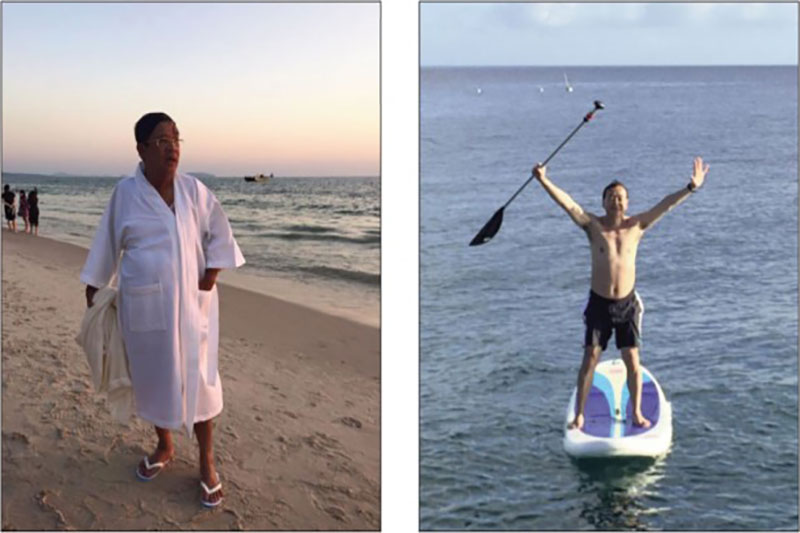 The sight of opposition leader Sam Rainsy in a bathing suit is nothing strange for users of Facebook, where he has been regaling his followers for years with photographs of himself at leisure.

But Prime Minister Hun Sen in board shorts and a singlet is something new entirely. 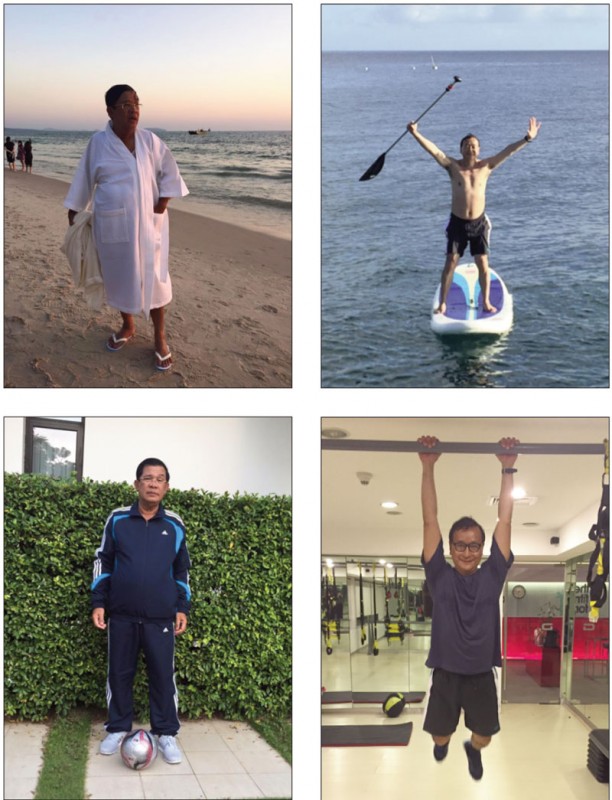 “Isn’t Samdech cold?” a commenter asked beneath a Facebook photograph of the premier in beach attire posted to his personal Facebook page late last month.

Over the past few months, as political protests have waned and Mr. Rainsy has gone into self-imposed exile, Facebook has become the site of an all-out popularity war between Mr. Hun Sen and Mr. Rainsy.

On December 30, three months after the “Samdech Hun Sen, Cambodian Prime Minister” Facebook page passed 1 million “likes” and the premier finally claimed it as his own, a series of 10 photos was posted to the page showing the strongman strolling along a Sihanoukville beach at sunset.

“My wife goes to the market while I am swimming happily with both Khmers and foreigners,” reads a message accompanying the images.

“Peace has prevailed in the country. The people have the freedom to go to all entertainment areas where they wish to go. Many tourists come to the beach. A group of French people knew me very well. They spoke to me nicely; I welcomed them and told them to be happy and asked them to visit Cambodia again.”

In 2013, Mr. Rainsy used a sophisticated social media campaign to loosen his perpetual rival’s iron grip on power, tapping into a torrent of online support that helped him make major gains in the national election, and later to organize mass demonstrations protesting the outcome of the ballot.

As the opposition leader used Facebook to call for revolution—and bragged about his dominance of the sphere—the prime minister distanced himself from the platform and the page he would later claim as his own.

“You won by running alone,” he said during a June 2013 speech, responding to Mr. Rainsy’s gloating about his social media prowess. “I do not even have any Facebook.”

How times have changed.

These days, a speech by Mr. Hun Sen is not complete without his latest musings on social media, or a nod to his self-proclaimed mastery of it. At the lectern, he waves his iPhone around, telling crowds how he has adopted modern technologies just like them.

“If we play, we play strongly,” he said at the opening of an overpass in Phnom Penh this week, pointing out that a drone was buzzing overhead, capturing footage to be posted to Facebook.

“You have to understand how Hun Sen does things: Wherever technology goes, I go too.”

And if you believe the numbers, the premier’s Facebook about-face was a shrewd tactical move—the latest in a career of political masterplays. As of Friday evening, the “Samdech Hun Sen” page had 1,800,555 “likes.” His December 30 sunset collection alone had been “liked” 129,934 times and “shared” by more than 14,000 followers. Followers say the 63-year-old has become accessible, and relatable, to the people.

“My life is simple and Samdech’s life is similar,” commented Vutha Si, one of thousands to weigh in on the holiday snaps, using the most common of Mr. Hun Sen’s many honorifics.

But while followers gushed at the invitation into the premier’s private life, Mr. Rainsy’s Facebook page was still setting the pace.

Three days before the prime minister posted his vacation photos, the 66-year-old opposition leader—out of the country to avoid a two-year prison stint—posted his own leisure snaps: a series of seven showing him in command, apparently, of a variety of watercraft off the coast of the Philippines.

“Strongman on the water,” user Chhay Lim commented on an image of Mr. Rainsy striking a glory pose—hands raised in the air—while on a stand-up paddleboard.

An image of the CNRP president taking the helm of a catamaran also had his followers in rapture, and reaching for metaphors.

“There is hope that Mr. President will steer the Cambodia ship …and lead the Cambodian people to happiness,” wrote one under the name Sdech Mean Prayouch.

However, despite Mr. Rainsy appearing to be a step ahead of his rival, and having more followers—passing the 2 million mark on Friday—individual posts by the prime minister are far more valuable when measured in the online currency of “likes.” As of Friday, the opposition leader’s watercraft collection had attracted 52,710 “likes,” less than half the amount of online adoration showered on Mr. Hun Sen’s beach set.

“He has become the star of Facebook,” said Thun Saray, a longtime political observer and the president of rights group Adhoc, who chuckled through a conversation about the prime minister’s new online persona.

Following the battle to be most leisurely, Mr. Rainsy and Mr. Hun Sen this week moved on to exercise and sports.

“In the morning before work, or at dusk after work, I like to do physical exercises and to practice different sports in order to remain in good health,” read a Tuesday post from the opposition leader that was accompanied by two photos: one of him swinging from a pull-up bar, the other of him running on a treadmill, his feet blurred.

Mr. Hun Sen returned fire the following day, posting his own sports collection—a set of images of him posing with grandchildren in matching uniforms, topped off by a shot of the prime minister standing alone in a tracksuit with a silver-colored football at his feet.

“January 5 is the 40th anniversary of my marriage to my wife. We did not organize a ceremony but my children organized a gathering with my grandchildren in sports uniforms. They asked me to wear it like a sportsman playing sports and take photos as a souvenir,” read a post accompanying the photos.

While politicians fighting for “likes” has provided entertainment for some, the importance of Facebook in contemporary Cambodian politics is no joke.

In December 2014, Mr. Rainsy called a press conference to announce he had reached 1 million “likes.” The prime minister, too, takes Facebook very seriously, according to Sok Eysan, a spokesman for the ruling party.

“All posts are written by Samdech because he does not like others to write for him,” he said.

Between Thursday and Friday afternoon, five videos, two sets of photos and an official announcement on the new traffic law were posted to the “Samdech Hun Sen” page. Thousands of comments were posted by followers, and many received personalized responses, some in English.

“All the writing is done by him,” Mr. Eysan insisted, adding that the leisure shoots were also a brainchild of his boss.

But the strongman’s embrace of Facebook has not been all fun. Exposing himself to the masses has also revealed his soft underbelly.

Users have doctored a number of his candid images. In one, he stands on the beach with an arm amputated (by Photoshop). In another, his wife stands with her feet stretched slightly apart (also by Photoshop).

In a speech on January 1, he issued a warning to those who insulted him online. “If I want to take action against you, we will get [you] within seven hours,” he said.

On Friday, he appeared to make good on his threat when a farmer from Kompong Thom province was charged by the Phnom Penh Municipal Court with making death threats and insults in a Facebook post aimed at the prime minister.

According to Mr. Saray, the Adhoc founder, such strong-handed plays reveal that the true Hun Sen, a hardened politician who has ruled the country for more than three decades, still lurks beneath the veneer of his new fun-loving, avuncular online persona.

Mr. Saray said that the prime minister had been forced to overhaul his image to appeal to a population that had “awakened from the past.” However, many people will not be so easily fooled, he said, pointing out that bodyguards can be seen in the prime minister’s photos of himself at the beach, where he claims to be walking freely among the people.

“He still does not feel secure,” Mr. Saray said. “He is trying to adapt to this new [technological] revolution in the country, but Hun Sen, when he speaks, he still behaves the same—nervous, emotional, strong—and he uses brutal words.”

“This is his character.”