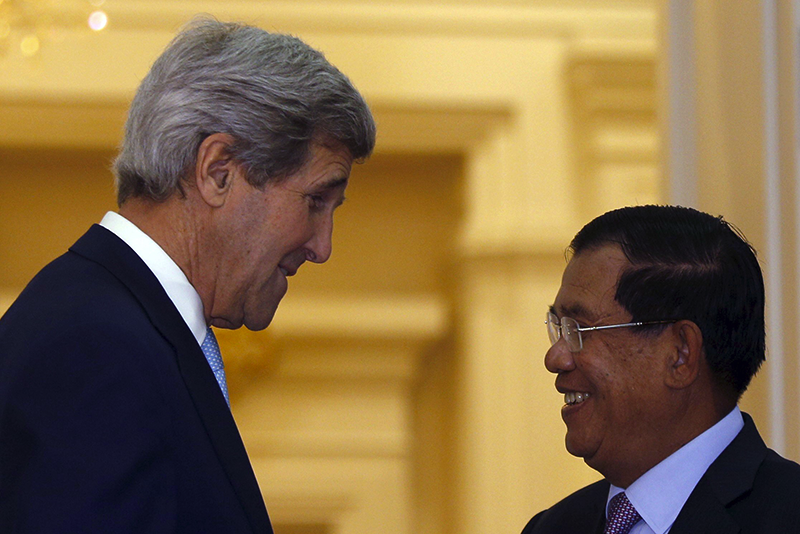 Hun Sen ‘Fed Up’ With Criticism of Asean Meet

Prime Minister Hun Sen on Fri­day expressed frustration at the widespread perception that Cam­bodia was in thrall to China during its 2012 Asean chairmanship, and attacked a critic who suggested that his government had attempted to placate Beijing after the re­cent visit of U.S. Secretary of State John Kerry to Phnom Penh.

Speaking at a university graduation ceremony at the Koh Pich Convention Center in Phnom Penh, Mr. Hun Sen provided a glimpse into his private meeting with Mr. Kerry last month, re­counting snippets of dialogue be­tween the two world leaders from a discussion about territorial conflicts in the South China Sea.

Tensions have been simmering for years between China, which lays claim to nearly all of the sea, and several Asean countries, which also have territorial claims in waters off their shore.

While China and its allies insist that each dispute be resolved bilaterally, the Asean countries would prefer to work as a bloc, giving them more leverage in negotiations with the Asian superpower.

Cambodia’s 2012 chairmanship of Asean became notorious for dysfunction after Cambodia repeatedly stymied efforts to discuss the South China Sea issue at a regional summit, leading many to suggest that the influence of China—Cambodia’s top donor—was be­ing felt. At the meeting, Asean leaders could not agree on a joint statement or code of conduct (CoC) for the sea.

During a press conference last month, a senior official with the U.S. State Department said that almost every Southeast Asian country felt that “the problems of Cambodia’s chairmanship left a black mark on Asean and are not to be repeated.”
Mr. Hun Sen said on Friday that he was “fed up” with this line of discussion.

“I told John Kerry that it was time to give me justice about the issue of the South China Sea in 2012,” he said, adding that he had felt it was important to make his views clear to Mr. Kerry in advance of an Asean summit in California that will be held later this month.

“I told John Kerry that I’m very disappointed because I need them to know that I’m really fed up before [joining] the Asean-America Meeting.”

“Why am I fed up? Because they said that Cambodia is too close to China, that’s why it failed to issue a CoC.”

Mr. Hun Sen noted that Asean summits in other countries had also failed to produce joint statements on the issue, and that nobody had succeeded in creating a CoC.

“So those who attacked Cambodia and attacked me in the past should apologize and comfort me. They should give me justice and grant me innocence.”

Despite this, Mr. Hun Sen reiterated that he shared China’s position that territorial disputes in the sea should be solved bilaterally.

“I told Kerry that we should not pour gasoline onto the flames,” he said.

During his speech, the prime minister also lashed out at a political analyst who had made comments to the media suggesting that Foreign Affairs Minister Hor Namhong’s recent visit to China was an effort to keep Beijing hap­py in the wake of Mr. Kerry’s visit.

“When I was in the position of foreign affairs minister at the age of 27, this analyst must have been playing around without any pants on,” he said, without naming the person in question.

“I’d like to clarify that Cambodia is independent and sovereign, and diplomats are not required to get opinions from anyone,” he said. The prime minister said he had also made it clear to Mr. Ker­ry that Cambodia would maintain an independent stance.

“John Kerry told me pretty clear­ly, ‘I’m not here to [make Cambodia] choose between America and China.’ Then I immediately re­plied to John Kerry, ‘I do not need to choose anyone, because I need to make friends with all.”

The comments Mr. Hun Sen objected to closely match ones made by analyst Ou Virak to the Voice of America news service earlier this week. Mr. Virak said on Friday that Mr. Hun Sen might have misinterpreted his remarks.

“My view is that if Cambodia is balancing China and America, it’s actually a good thing, so I would say that I was not complaining that he is running to China,” he explained.

“I think Cambodian foreign policy needs to be one that balances foreign powers, but we also have to be self-reliant and formulate our own foreign policies without un­due interference from other for­eign powers,” he added.