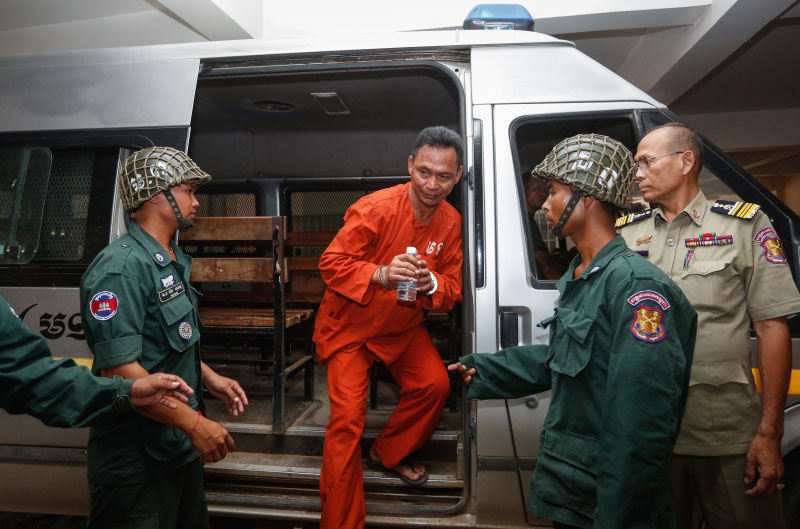 Anti-Corruption Unit (ACU) chairman Om Yentieng on Monday denied a claim made in court last week that he had exceeded his authority by ordering the bodyguard of ousted Phnom Penh Municipal Court director Ang Mealaktei to search the home of a murder suspect’s parents.

Pech Prum Mony, Mr. Mealaktei’s erstwhile bodyguard, made the claim during his trial for interfering in the discharge of public work at the municipal court on Friday.

He was arrested in February, shortly after Mr. Mealaktei was removed from his post amid allegations that court officials had taken a multimillion-dollar bribe to release the parents of Thong Sarath, a Defense Ministry official charged with the murder of businessman Ung Meng Chue.

On Friday, Brigadier General Prum Mony said in court that both Mr. Mealaktei and Mr. Yentieng had instructed him to join the search of Mr. Sarath’s parents’ Phnom Penh villa in December in the hopes of finding clues regarding the murder suspect, who was then at large. “At that time, I asked senior minister Om Yentieng whether I should go and search,” Brig. Gen. Prum Mony said. “He ordered me to search.”

Contacted Monday, the ACU chairman denied that he had given any such order. “He just said that. Do you believe him?” Mr. Yentieng said.

The chairman even rejected that Brig. Gen. Prum Mony had made the allegation against him in court. “I don’t believe you that such words were spoken,” he told a reporter. “You were in attendance and listened to the trial; you have no right to repeat what was said in the trial.”

At the trial, Brig. Gen. Prum Mony said Mr. Mealaktei had instructed him to search the house and to befriend Mr. Sarath’s wife in an attempt to obtain information that would help track down the suspect.

Mr. Mealaktei was arrested last month and charged with embezzlement for allegedly confiscating an SUV from a drug dealer and giving it to his son.

On Monday, his lawyer declined to comment on Brig. Gen. Prum Mony’s testimony without permission from his client.