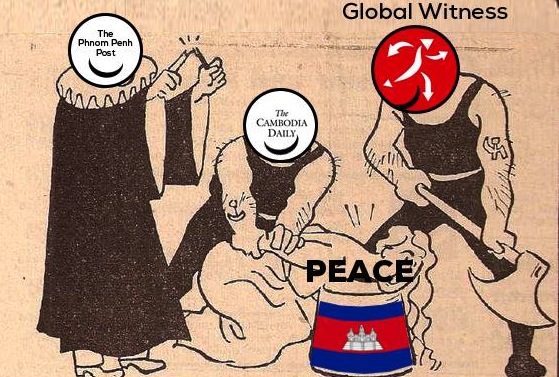 Foreign-owned newspapers in Cambodia serve as opposition propaganda machines and will face legal repercussions if they continue to disrupt stability in Cambodia, according to an anonymous letter published by a CPP-aligned media outlet and endorsed by a government spokesman.

The letter, titled “Behavior Plunging Cambodians Into a Bonfire of War Because of Foreigners,” was published on the Fresh News website on Friday morning along with a doctored Nazi propaganda cartoon in which the logos of The Cambodia Daily, The Phnom Penh Post and Global Witness are superimposed over the faces of World War II Allied leaders on the verge of decapitating a woman identified as “Peace.”

The letter echoed claims made by Prime Minister Hun Sen’s children in response to a new report released by the London-based anti-corruption group and covered by the Daily, the Post, and dozens of local and international news organizations on Thursday.

The report, “Hostile Takeover,” links the first family to a vast business empire with a combined capital of more than $200 million.

Global Witness had given media outlets access to its findings in advance under the condition that they remain under embargo until Thursday morning—a standard practice among both government and non-government agencies.

Later on Thursday, Hun Mana, the prime minister’s eldest daughter, decried the “destructive efforts” of the Daily, the Post and Global Witness, accusing them in a Facebook post of colluding to defame her father in the run-up to coming elections.

In a post of his own, the prime minister’s middle son, Hun Manith, said the report and subsequent articles were “as usual, full of mistakes and false information” and written to “disparage and defame the Hun family with false information.”

The anonymous letter to the editor published online by Fresh News on Friday did not address the Global Witness report directly, but reiterated the accusations against the two newspapers—and took them a step farther.

“The Cambodia Daily and The Phnom Penh Post are foreign newspapers that often try to find all venomous means and tricks to destroy the peace of Samdech Hun Sen,” the letter says.

“These white-skinned foreigners never experienced the Killing Fields and the Khmer Rouge and they also do not know that our Cambodia suffered badly in the bonfire of war until we survived and enjoyed the development that exists today,” it says. “Those newspapers are rude and write in favor of the opposition party without researching the accuracy of sources before publishing stories.”

“The two newspapers should reform themselves by working with a high code of ethics and be clearly responsible and beneficial to Cambodia as a whole. Otherwise, Cambodia will have no choice but to take legal action and send all of you out of Cambodia,” the letter ends.

The accompanying cartoon, versions of which first surfaced in comments on Hun Mana’s post on Thursday, uses a piece of Nazi propaganda titled “In the Name of Humanity.”

The original cartoon shows former former U.S. President Franklin Roosevelt, British Prime Minister Winston Churchill and Soviet dictator Joseph Stalin on the verge of decapitating a damsel on a chopping block marked with a Jewish Star of David. Text below the image suggests that the Allied leaders are killing peace, rather than living up to claims that they represent humanity’s salvation.

Reached on Friday, Fresh News founder and CEO Lim Cheavutha said the letter was submitted by an ordinary reader and that publishing anonymous letters was standard practice at the website.

“This was not intended to attack anyone—it is just news,” Mr. Cheavutha said, denying that Fresh News had any formal affiliation with the ruling party.

Fresh News is regularly the first outlet to publish official government documents, and often does so without comment. In May, it posted an anonymous opinion piece suggesting that the U.S. Embassy was using local NGOs to foment revolution.

On Friday, Council of Ministers spokesman Phay Siphan said he had “no idea” who submitted the letter, but that the author’s logic was sound.

“You’re the propaganda,” Mr. Siphan said, adding that The Daily and the Post are “part of the opposition against the prime minister.”

Mr. Siphan said the newspapers needed to more carefully check facts before publishing, but declined to specify any inaccuracies in the articles about the Global Witness report.

“If you are not professional, we will take action on that one,” Mr. Siphan said, adding that he planned to host a meeting with local news outlets to prevent the situation from escalating but declined to say what would be discussed.

“I don’t want the messenger to get killed, my friend,” he said with a laugh.

Correction: A previous version of this article incorrectly stated that the Global Witness report was under embargo until Wednesday.

Uncertainty and Pressure: Cambodia Under the Weight of Sanctions