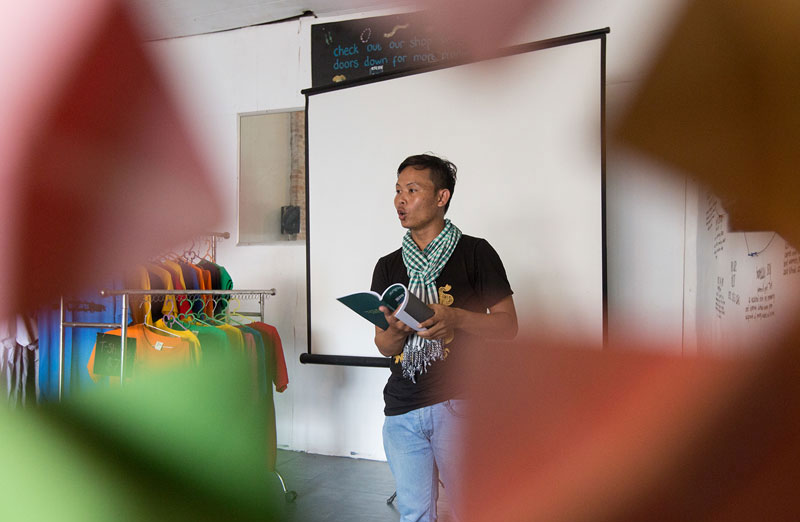 ­KAMPOT CITY – Visitors and locals unaware that the inaugural Kampot Writers and Readers Festival, which wrapped up Sunday, was happening may not have noticed anything different about the relaxed riparian town at first.

During the four-day festival, the streets here were for the most part quiet as ever by day. But if they stopped for lunch at one of the small riverside cafes, they might have stumbled upon rooms packed with some of the estimated 500 visitors who were in town to enjoy a range of events celebrating the power of the word.

Though the event catered mostly to non-Cambodians—most of the 50-odd featured writers, poets and musicians were foreigners—it also offered a chance for native artists to connect with a broader audience.

On the second floor of the Epic Arts cafe on Friday afternoon, 27-year-old Chheangly Yeng was reciting his traditional Khmer poetry to a packed and captivated room. Started during the Angkor period, the style of recitation resembles singing and is a skill that not all poets can master, he said.

“Many poets will write but not recite,” and often prefer free verse over the more structured form of traditional Khmer poetry, he said.

“Most of them love writing a lot, even on Facebook, but the activity of reading is not large,” he added, highlighting a problem many Cambodian writers face in trying to find an audience for their work.

The effects of the country’s violent past and continuing lack of freedoms on Cambodians’ engagement with literature was an ever-present theme over the weekend.

“War happened again and again after the French,” writer and guest speaker Hang Achariya said. “Even though we have peace now, we call it negative peace,” he added, referring to the relative stability of present-day Cambodia coupled with its restrictions on free speech.

Mr. Achariya, 24, who was born in a Thai refugee camp, said he had found it difficult to get his thematically dark works published.

“[I write] about crime, about ghosts and about love that hurts, about prostitutes, about corruption, about the government,” he said. “More than ten printing companies refused my stories.”

Eventually, one printing house —Boeng Tonle Sap—finally agreed to publish his books “Blood from Hell” and “Head Dry Fish” in 2011.

Many of the Cambodian writers at the festival said they felt isolated by their art because friends and relatives did not consider it a viable profession or worthwhile pursuit.

Children’s book author Nguon Sivngim said her father had refused to read her book “Not Afraid of the Ghost,” even as a third edition was released this year.

“I told my friends but not my parents” about attending the festival, she said. “I never mention about my writing in my family.”

Other Cambodian writers said just getting to the festival was a financial challenge for many of their peers.

“They wanted to come here so much and join the writing festival but they did not have time and chance because…their circumstances [do] not allow them to come,” Mr. Achariya said. “Most of them [are] from poor families. They want to join us but they don’t have the money to pay for the accommodation, to pay for the transport.”

Mr. Yeng, the poet, said there was also an inherent tension in performing a piece of work written in Khmer for a majority expat audience, though he and many others were still grateful for the chance to be heard.

“We are faced with very few readers,” said Mr. Yeng, who performs his work in both Khmer and English. “Sometimes it’s not a good thing to think about English, but I just want a lot of people to read it.”

The Messenger Band, made up of former garment workers, managed to captivate the mostly foreign crowd with their Khmer-language songs during a Friday evening show at the Banteay Srey spa.

The theatrical performance of mournful ballads by members Sothary Kun, Sochevika Kao and Leakhana Leng convinced Australian songwriter and festival headliner Paul Kelly to invite them to a private songwriting workshop the next day.

The same day, Cambodian-American Arn Chorn-Pond’s emotional talk encapsulated the power of the festival to bridge the gap between emerging Cambodian artists and the expatriate community.

His experience as a child flautist under the Khmer Rouge was turned into a biography by Patricia McCormick in 2012. “Never Fall Down” has since been translated into Khmer and will be distributed to Cambodian students through schools in the coming months.

“We really needed [the festival] not only for foreigners. I also dream of having locals, much more local people involved, children involved,” Mr. Chorn-Pond said. “We need this kind of festival all over Cambodia…. This will bring us together.”