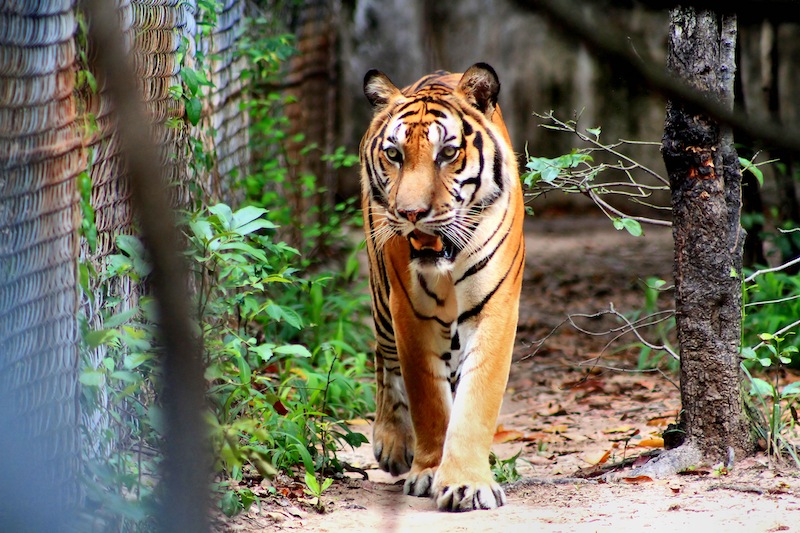 A leading Indian conservationist and tiger expert is warning that a multimillion-dollar scheme to reintroduce the big cat to Cambodia will be a “tragic failure” that could cost lives, and that its advocates will come to rue the attempt.

Earlier this month, the government unveiled a grand plan to import eight young wild tigers from India to repopulate eastern Cambodia, where they have been declared “functionally extinct.” With the help of donors and the World Wildlife Fund (WWF), the plan—which is expected to cost between $20 million and $50 million—aims to have the cats roaming the Mondolkiri Protected Forest along the Vietnamese border by 2019.

But in an interview with the Indian news outlet Mint published Wednesday, one of India’s top tiger experts raised major concerns about the scheme. K. Ullas Karanth is director of Science-Asia for the Wildlife Conservation Society (WCS) and has studied tiger populations extensively.

“I have surveyed those habitats in Cambodia two decades ago in Mondolkiri for WCS, when the last wild tigers disappeared,” he was quoted as saying. “I do not think the required 1,000-2,000-square-kilometer area of prey-rich, people-free and livestock-free habitat is available in Cambodia at this time to seed and establish a viable tiger population. Every wild tiger requires 500 large prey animals to sustain it. If they are not there, it will kill livestock and people.”

According to the report, Mr. Karanth went on to call the plan “bereft” of any understanding of ecology or the Cambodian social context, and said it was bound to be resented by local communities.

“It will lead to tragic failure, for which the introduced tigers will pay with their lives,” he said.

Mr. Karanth added that of all the tiger seeding efforts over the past several decades in India, only one had worked.

“All others have failed or stalled, in some cases with dozens of people being killed and tigers being finally shot,” he was quoted as saying. “Both Global Tiger Forum and WWF, which are promoting this extremely unwise scheme, may eventually regret their decision if they do go ahead with it.”

Local representatives of the WWF and WCS did not reply to requests for comment on Thursday. Keo Omaliss, head of the Agriculture Ministry’s wildlife and biodiversity department, could not be reached.

The tiger reintroduction plan focuses on the country’s Eastern Plains Landscape, covering 30,000 square km including all or parts of four protected areas, including the Mondolkiri Protected Forest.

“As part of the most expansive and intact tropical dry forest in Southeast Asia, it boasts one of the largest areas of high-quality tiger habitat and has amongst the best potential carrying capacities for tigers and their prey in the region,” the WWF says in a report released last week.

The group carried out a preliminary feasibility study with the International Union for Conservation of Nature in 2013. That study, the WWF report says, “concluded that reintroduction was technically, ecologically, and socially feasible provided ungulate tiger prey populations continued recovering due to strong law enforcement.”

It estimates that the plan would require an equivalent of nine Sambar deer per square kilometer of the Mondolkiri forest, which stretches across some 4,000 square km. It also says the forest would need six times as many rangers as it has now.

But the Environment Ministry says its rangers are overstretched as it is. They are likely to be even more so with plans for the ministry to take on protected areas previously under the Agriculture Ministry’s jurisdiction, as well as five brand-new protected forests nationwide.

The Environment Ministry has also proved incapable of policing its nominally protected areas, with deforestation rates inside of them nearly as high as the national average—one of the highest rates in the world—according to U.S. satellite data. Although the Mondolkiri forest itself has remained relatively intact, reports of illegal logging and poaching inside have emerged. Parts of the surrounding protected areas have already been clear-cut by rubber plantations.

Conservationists have also raised red flags about a paved road the government wants to build straight through the Mondolkiri forest to the Vietnam border. Although the WWF said earlier this month that the road had been put on hold, deputy provincial governor Yim Lux said on Thursday that plans were moving forward.

“We have not built anything yet, but right now we are studying the master plan,” he said. “The provincial public works and transport department is considering how to build it, like where to start and what route to take.”

Even so, Mr. Lux said he was optimistic that the road and the tigers could coexist.

“I think it’s a good plan; those tigers will give birth to another generation,” he said. “We will try to protect the forest to make it a safe place for them to live.”