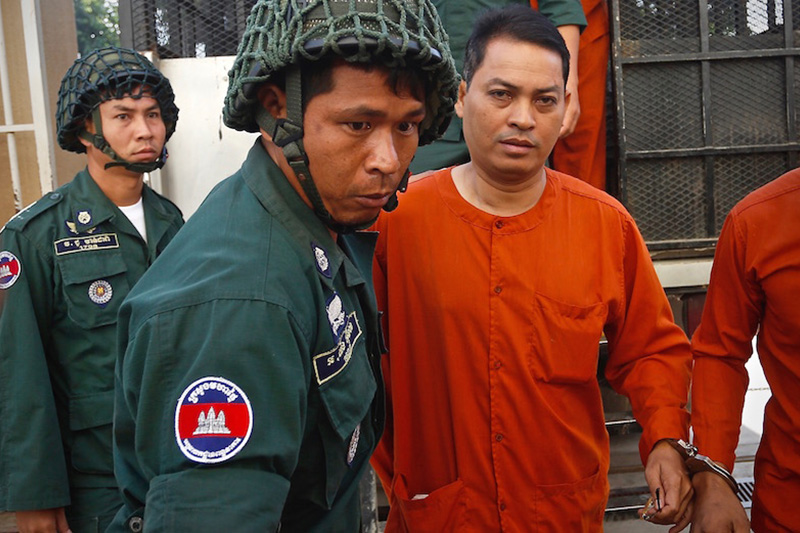 Cambodia’s disgraced former ambassador to South Korea, Suth Dina, continued to protest his innocence on Thursday while being led away from a Phnom Penh courtroom after receiving a five-year prison sentence for abusing his power and exploiting his position.

A political chameleon who had hopped between opposition movements and ruling parties, Mr. Dina worked for the Foreign Affairs Ministry and as a personal adviser to Prime Minister Hun Sen before landing the ambassadorship in Seoul in 2014.

Following a three-year tenure marked by controversy and allegations of corruption, he was struck from his post and arrested in Phnom Penh in April.

“I can’t accept this,” Mr. Dina, 45, said as he was escorted out of a Phnom Penh Municipal Court room. “There was no evidence to inculpate me.”

Accusations leveled at Mr. Dina since his arrest have included claims that he took kickbacks from migrant workers, pocketed fees paid for visas and failed to pay rent on the embassy building.

The Anti-Corruption Unit publicly raised suspicions over his ballooning personal wealth, which it reported had increased by as much as $3 million during his time in South Korea.

His trial last month, however, was more narrowly focused, centering on $116,995 in embassy revenue that was apparently not transferred to the Foreign Affairs Ministry on time.

Evidence included written testimonies of four embassy officials, whom Mr. Dina accused of seeking revenge for his crackdown on their own bribery schemes.

Presiding Judge Kor Vandy on Thursday found Mr. Dina guilty of abuse of power and unlawful exploitation, and in addition to the prison sentence, fined him 10 million riel, or about $2,500. He said Mr. Dina had the right to appeal the verdict.

Hok Phalla, a lawyer for Mr. Dina, said that whatever administrative decisions the former ambassador had made in South Korea, he had always informed then-Foreign Affairs Minister Hor Namhong and could not be accused of abuse of power.

“I think there was nothing seriously inculpatory against my client,” he said.

CNRP lawmaker Hing Soksan, the deputy secretary-general of the National Assembly, rallied alongside Mr. Dina as members of the anti-government youth group Students’ Movement for Democracy in the late 1990s. He described his former colleague as “a flip-flopper.”

“I’m not sure whether he committed the crime or not, but I plead with authorities to conduct a thorough investigation to avoid a wrongful sentence,” Mr. Soksan said.

“I only know Suth Dina from the past, when he was a nationalist and protested against the government of Samdech Hun Sen,” he added.

“He was a person who protested against human rights abuses and corruption in society.”

Mr. Dina rose to prominence as a member the Students’ Movement for Democracy, before starting an offshoot organization following a fallout with other leaders. He then founded and fronted the Khmer National Front Party before shifting over to the Norodom Ranariddh Party in 2006.

He eventually joined the ruling CPP in 2009 and was an undersecretary of state at the Foreign Affairs Ministry before being appointed as the government’s envoy to South Korea.

“When he worked, visa extensions were so slow,” she said, adding that his successor, Long Dimanche, had already significantly hastened the process.