A Defense Ministry official was stabbed to death outside a busy market in Phnom Penh on Tuesday morning by a helmeted assailant who fled on a motorbike and remains at large, according to witnesses and police.

Ly Davy, a 36 year-old major in the ministry’s military service department, was walking alone near the northwest corner of Depot Mar­ket in Tuok Kok district’s Phsar De­pot I commune when an un­identified assailant stabbed her repeatedly in the chest at about 9:45 a.m., commune police chief Sdoeng Sarith said at the scene. 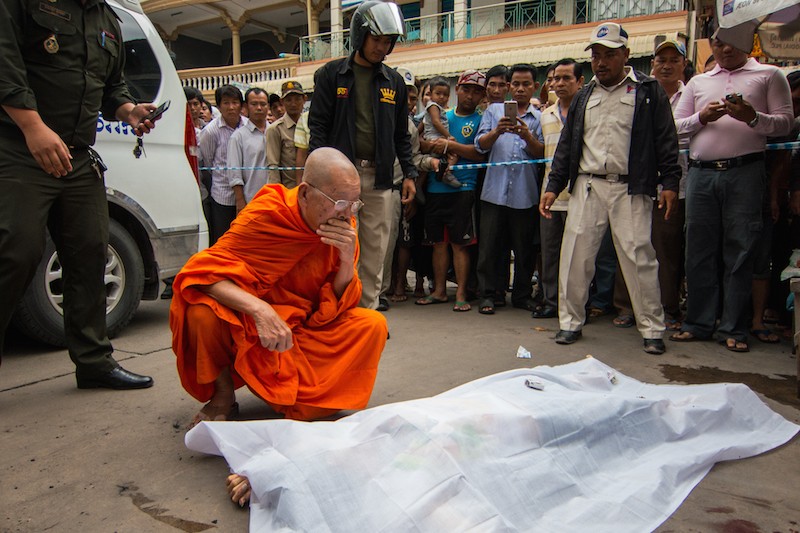 “We are investigating, and as of now I don’t have anything to tell you,” he said, ignoring further questions.

District police chief Hun Sothy said at about 10 p.m. that police had yet to identify or arrest any suspects. Defense Ministry spokes­man Chhum Socheat declined to comment on the killing.

The bloody attack occurred at the busy intersection of streets 219 and 156, in sight of several food stalls and small stores.

Duong Sithorn, 37, who works at a Wing money transfer outlet that faces the scene, said he did not see Ly Davy’s killer approach but heard the victim scream. When he looked up, he saw a man stabbing her in the chest, his face obscured by a motorbike helmet.

“He stabbed her with a small knife, at least 10 times,” he said, add­ing that the man was about 1.7 meters tall and appeared to be in his 30s.

“While she was being attacked, a man appeared and threw a motorbike helmet at the killer, and then another man threw several pieces of charcoal,” he said.

But the killer continued stabbing Ly Davy for about a minute before speeding off on a Honda Click motorbike, dodging several other witnesses who attempted to kick the vehicle over, he said.

An hour after the attack, at about 10:45 a.m., Ly Davy’s body was still lying on the street, covered in a thin white sheet. From behind a cordon of police tape, onlookers tossed riel notes toward the corpse to help the victim’s spirit reach the afterlife.

As commune and district police kept the crowd at bay, Ly Davy’s father, an elderly monk, arrived to identify her body. When he saw the body on the ground, he began weeping and crouched to lift the sheet. Upon seeing his daughter’s face, he nodded once, replaced the sheet and was helped to his feet by relatives and officials. 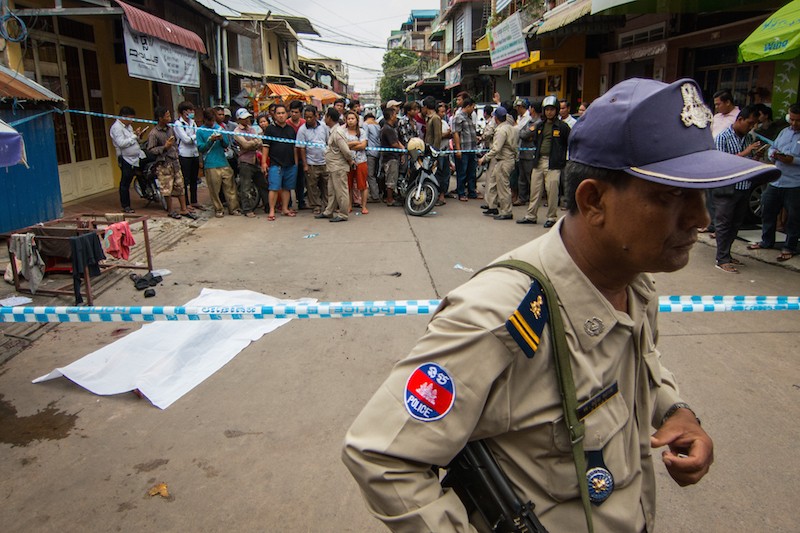 About 10 minutes later, the victim’s aunt, Ly Silen, 40, arrived with two police investigators and similarly lifted the sheet to view her niece’s face.

“She was very quiet and polite, and there was no reason for anyone to seek revenge against her,” Ms. Silen said, wiping away tears.

“So I think the killer is a confused person,” she said, speculating that the murder was a case of mistaken identity.

As Ms. Silen looked on, the investigators photographed the scene. When they lifted the sheet to photograph Ly Davy, the murder weapon—a black-handled and bloodstained kitchen knife—could be seen to the left of her torso.

Ly Davy, her white T-shirt blackened with blood, was then lifted into a body bag and transported to Toek Thla pagoda in an ambulance.