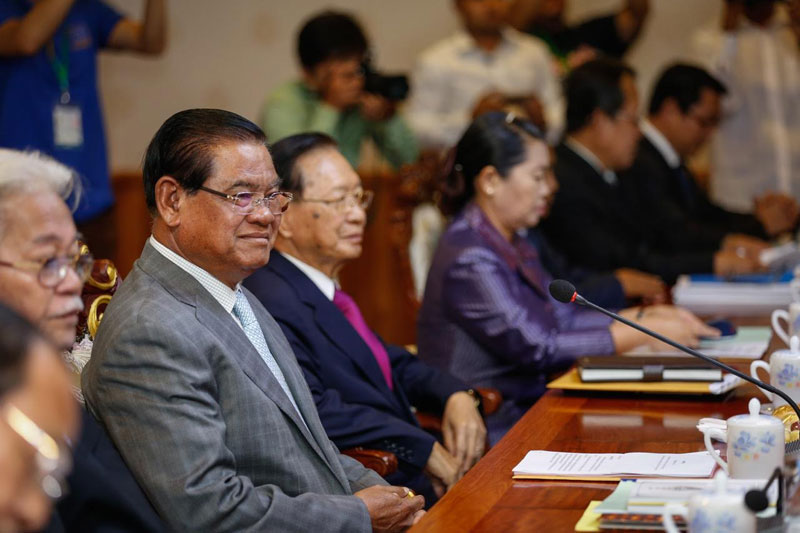 The ruling CPP and opposition CNRP on Friday finished negotiating a package of amendments to the commune election law and the internal rules of the National Assembly, agreeing that the campaign period for the 2017 commune elections would be extended from 10 days to two weeks.

The parties also agreed that campaigners would be allowed to move between communes rather than be constrained to a single commune throughout that period, as the CPP had sought, according to CNRP spokesman Yem Ponhearith.

“For the campaign period, it will last for two weeks, and before, the CPP had requested to [keep] campaigns in a [single] commune, but now we have asked to remove it and therefore commune [campaigners] can campaign in any commune,” he said following the close of negotiations on Friday evening.

However, as the CPP wished, parties will have to seek permission from local authorities before erecting signs bearing their logos, and decisions on whether a violation of the election law would be treated as a felony or a misdemeanor will be dealt with on a case-by-case basis, Mr. Ponhearith said.

At a post-negotiation press conference, Interior Minister Sar Kheng and CNRP President Sam Rainsy praised both parties for their work in upholding the “culture of dialogue”—a name for the political detente hammered out by Mr. Rainsy and Prime Minister Hun Sen earlier this year.

“Today is another historic day,” Mr. Rainsy said. “The culture of dialogue is lively and it has spread to become bigger and more effective.”

The opposition leader added that he asked Mr. Kheng to intercede on behalf of numerous CNRP activists and officials currently imprisoned on what some have called politically motivated charges.

“I also called through Samdech Kralahorm Sar Kheng to Sam­dech Techo Prime Minister Hun Sen to ask him to have compassion…for the people who have been imprisoned, to have the freedom or opportunity to meet their families in the upcoming Pchum Ben season,” he said.

Mr. Kheng said he told Mr. Rainsy that he could not discuss the issue, as it was not on the day’s agenda.