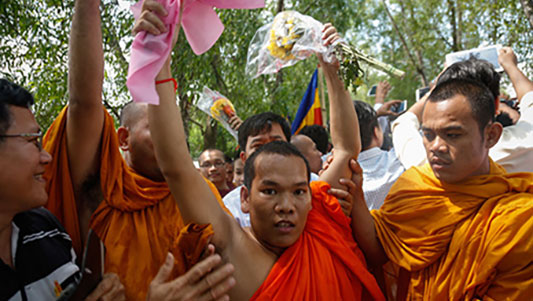 Soeung Hai was defrocked and convicted for protesting in front of the municipal courthouse on November 11 last year and kicked out of his Meanchey district pagoda after his release from prison in April. But according to City Hall, which filed the fake-documents complaint, Soeung Hai was never officially ordained to begin with.

“Soeung Hai, 28, was sentenced to two years in prison and fined 6 million riel,” or about $1,500, reads the November 3 warrant, signed by Judge Khy Chhai. Soeung Hai, it says, “was convicted of use of a forged public document and the unauthorized wearing of a monk’s robe, committed on November 11, 2014, in front of the Phnom Penh Municipal Court.

“The public forces are ordered to search to arrest and detain defendant Soeung Hai,” it adds. “The prison chief is ordered to receive and detain this person until there is a new decision.”

Soeung Hai’s lawyer, San Sudalen, said she did not know where he was. But she insisted that the document she showed in court during the October 7 trial, indicating that Soeung Hai was ordained by the Prey Tea pagoda in Takeo province in 2006, was genuine.

“And if he was a fake monk, why did monk officials have a ceremony to defrock him when he was arrested [last year]?” she said. “I think this is injustice for my client because the court did not show evidence during the trial that he was using forged documents.”

Phorn Davy, head of the city’s cults and religion department, said the chief monk of the Takeo pagoda where Soeung Hai’s papers claim he joined the clergy told his researchers that Soeung Hai was never ordained there.

“Soeung Hai did not have the correct documents to show where he became a monk,” he said. “To become a monk, you need to be recognized by the district chief monk and commune authorities, but Soeung Hai does not have them.”

Contacted on Tuesday, Judge Chhai declined to comment. Eang Sophea, chief of the municipal police’s serious crimes bureau, said he had yet to receive the arrest warrant.

Soeung Hai could not be reached.

Yin Ratanak Sotheavy, a monk and friend of Soeung Hai, said he was out of the country.

“He is staying abroad now, but I cannot say which country, for his safety,” he said.

Am Sam Ath, technical supervisor for rights group Licadho, said he believed Soeung Hai was being targeted because of his activism over Kampuchea Krom, a former region of the Khmer empire ceded to Vietnam by colonial France. Many Cambodians accuse Vietnam of persecuting ethnic Khmer people who still live in the region. The current Cambodian government, which was installed by Vietnam after the fall of the Khmer Rouge in 1979, is highly sensitive to the activists’ complaints.

“Soeung Hai became a target because he was active in demanding the freedom of Khmer Kampuchea Krom and joined protests,” Mr. Sam Ath said.