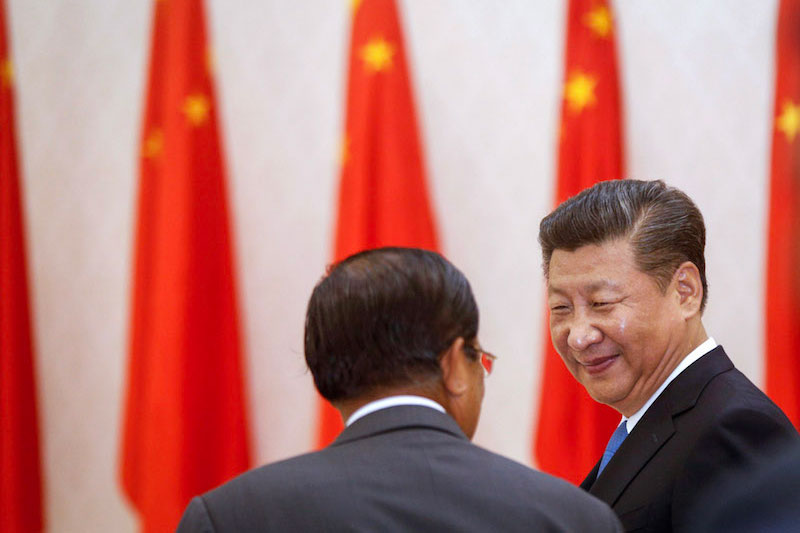 Chinese President Xi Jinping is not one to arrive without a gift.

On his first visit to Cambodia as head of state on Thursday, he pledged some $237 million in aid, erased almost $90 million in state debt, offered nearly $15 million in military support and signed a bevy of new agreements.

After arriving in the early afternoon, Mr. Xi met first with King Norodom Sihamoni and Queen Mother Norodom Monineath, then got down to business with Prime Minister Hun Sen at his office building in Phnom Penh to ink a raft of new trade, development and education agreements.

The prime minister told Mr. Xi that the development of Cambodia “could not have happened without the generosity of our Chinese friend,” Eang Sophalleth, personal assistant of Mr. Hun Sen, said during a briefing after the meeting.

For his part, Mr. Xi described Mr. Hun Sen as an “ironclad friend of China,” according to Mr. Sophalleth and promised to wipe out more than $89 million of Cambodia’s debt to his country. He also pledged a grant of nearly $15 million for Cambodia’s military, several hundred new scholarships and assistance with temple repairs, with a particular focus on Preah Vihear, the ancient Hindu temple on the border with Thailand that has been at the center of a long dispute over its ownership.

Aside from the debt removals and military aid, the 31 agreements the two leaders signed include a separate $178 million in unspecified grant financing, and about $59 million in loans, according to a list of the agreements provided to reporters.

The list, which provided no specific details, included memoranda of understanding on the “exchange of intelligence information involved with the implementation of national security law,” combatting human trafficking, maritime cooperation and deepening ties in radio and television.

China also pledged loans and technical support or direct financing for a number of ongoing or new development projects: improvements to Siem Reap International Airport; a new capital beltway, upgrades for National Roads 51 and 11; upgrades to the power grid; and water resource and irrigation system overhauls.

The countries inked plans for a new Cambodian-Chinese friendship hospital and a Sihanoukville coal power station.

Mr. Xi was set to fly onward to Bangladesh this morning.

China and Cambodia have grown increasingly close in recent years as Beijing has showered the country with billions of dollars of aid, including a promise for some $600 million in grants in July. In return, analysts say that Cambodia has toed Chinese foreign policy lines on the South China Sea territorial dispute, and made sure that the Asean bloc remains split on the issue.

In advance of the visit, Mr. Xi penned a glowing letter on Wednesday’s front page of the Rasmei Kampuchea newspaper under the title “China and Cambodia: Good Neighbors and Trusted Friends.”

The letter chronicled what the president characterized as centuries of friendship, though it glossed over the Chinese government’s support of the Khmer Rouge—and antagonism toward the CPP—through the early 1990s.

“I am convinced that with our concerted efforts, the traditional friendship between China and Cambodia will bear more fruits, allowing us to forever be good neighbors and genuine trusted friends,” Mr. Xi wrote.

Central Phnom Penh was dotted with what authorities said were some 7,000 security forces, including military and traffic police as well as hooded and goggled gunmen bearing the insignia of Mr. Hun Sen’s bodyguard unit.

Major arteries were cleared to make way for Mr. Xi’s motorcade, which took at least five minutes to fully clear any given intersection on Norodom Boulevard as he made his way from Phnom Penh International Airport to the InterContinental hotel.

Gaggles of students, civil servants, scouts and curious tourists lined Wat Botum park and the Royal Palace to greet Mr. Xi as his motorcade approached the area in the early afternoon. Event organizers handed out flowers and placards that dou-bled as shields from the midday sun.

Many of the students, like ebullient 21-year-old Try Kam Lant, were studying Chinese in school.

“I love it,” she said of her studies at Phnom Penh’s Toun Fa Chinese School. “I think people who speak Chinese have an easier time finding a job.”

Ms. Kam Lant confessed to knowing little about Mr. Xi except that he ran an increasingly powerful country. “I think Cambodia is China’s best friend,” she said outside the gates of the Supreme Court.

Closer to the Royal Palace’s front gates, a group of Chinese expatriates snapped photos and chanted “Leader Xi, I love you” in Mandarin.

Chea Lyphea, who has Chinese ancestry and speaks both Mandarin and Khmer fluently, said her Chinese manager was among the group crowding to get a glimpse of a man he was unlikely to ever see on his own soil.

The 21-year-old project coordinator at a Chinese-owned construction company said Sino-Cambodian friendship had been a boon to her career as a Mandarin speaker and to Chinese drawn to Cambodia’s comparatively freer markets.

Her industry had benefited, too, as contracts for road repairs that once went to European companies were increasingly dished out to Chinese firms.

The deepening relationship is “convenient for me,” she said. “It’s helped me a lot.”

At about 3 p.m., a troupe of Chinese dragon dancers stirred into motion and the crowd erupted into cheers as Mr. Xi’s motorcade swooped into the palace gates.

But the intended recipient may have had trouble getting a glimpse of the pageantry from the backseat of his tinted Mercedes sedan, which was flanked by a swarm of a dozen or so motorcycle guards.

As a brass band blared from behind the palace gates, the afternoon’s festive mood continued for onlookers.

Chen Yan, a 25-year-old Chinese backpacker who had chanced upon the crowd, said that Cambodia was relatively unknown for most people in her country, but that they were nonetheless curious.

“I think the Chinese people are eager to know more about the world outside China,” she said.