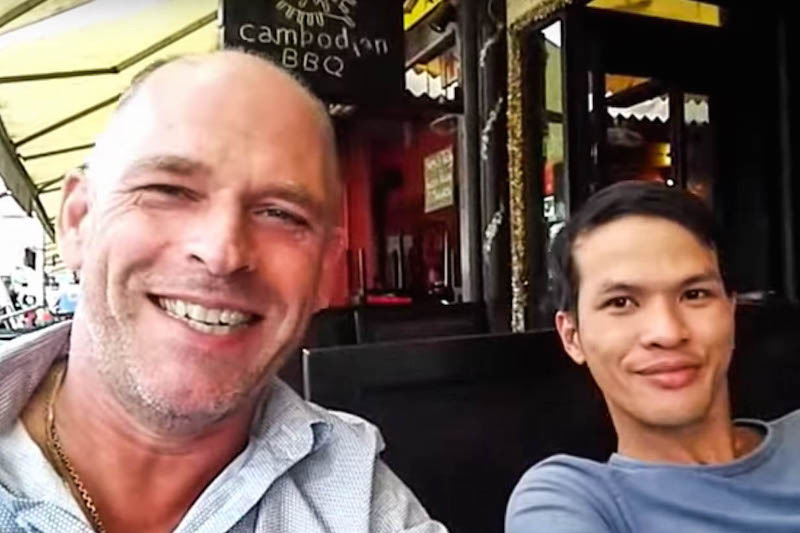 A Dutch national and two Cambodians were taken into police custody in Kompong Cham province on Tuesday over videos circulated on Facebook showing the physical abuse of a naked toddler, including torture with an electric prod, officials said.

Deputy Kompong Cham police chief Heng Sambath said the men were suspected of involvement in the torture and rape of a child. He said the Cambodians—Ret Sothy, 28, and Oeu Nat, 25—worked for the Dutch man, who owns a plantation in Mondolkiri province.

Mr. Sambath said the plantation owner was 53 years old and went by the Cambodian name Ly Heng. A photograph of the man in police custody, however, matched photographs online of Stefan Struik, the CEO of Kamkav, a company with cocoa plantations in Mondolkiri and a palm sugar plant in Kompong Cham.

A fourth man, whom Mr. Sambath identified as a Vietnamese national named Nguyen Thahn, remained at large. A Facebook page belonging to a user named Dung Thanh shows numerous photos of himself posing with Mr. Struik. In a YouTube video, the Dutchman introduces the same man as his boyfriend, and names him as Nguyen Dung.

Mr. Sambath said the three men in custody were being questioned over the video footage of abuse, a complaint from the 2-year-old boy’s parents that he had been raped, and in an effort to track down the fourth suspect.

“We haven’t arrested that one yet,” he said of Mr. Nguyen.

Many of the initial videos posted to Facebook were taken down over the course of the day, including a post in which a Vietnamese woman wrote that she felt compelled to share the graphic videos in the hope that the perpetrators were caught.

At least one video remained online as of Tuesday evening, showing a man using a stun gun on various parts of the child’s body as the toddler screams in pain.

James McCabe, head of the Child Protection Unit, a policing charity working on the case, said the child was in the organization’s care. He said a “male” was assisting in the investigation, but declined to give further details or say if other children may have been abused.

Deputy Mondolkiri police chief So Sovann confirmed that the abuse had occurred on a plantation in the province and said the victim was a Cambodian child whose parents worked for the Dutch owner.

Mr. Sovann said Mr. Nguyen is believed to be the man in the video abusing the boy. He was thought to have fled to Vietnam, though he said Cambodian and Vietnamese police were cooperating to track him down.

“The Dutchman is the owner of the farm and the Vietnamese man is a chef that he hired,” Mr. Sovann said, adding that he did not know if they were in a romantic relationship.

“They live on the farm together and [the boy’s] mother is a laborer there,” he said, adding that the parents initially did not know about the abuse because the child was not bruised or visibly injured.

“The mother didn’t know. She didn’t know when it was happening,” he said. “There were no scars or anything.”

However, a police report provided by Mr. Sambath said there was strong physical evidence that the boy had been anally raped.

Mondolkiri provincial police chief Touch Yun said he had learned about the case from videos posted online—showing a man speaking Vietnamese and torturing a naked boy who appeared to be about 2 years old—claiming the abuse occurred in the province.

“I learned about it from Facebook, too,” he said.

Police in Kompong Cham said they were tipped off to the case by police in Mondolkiri.