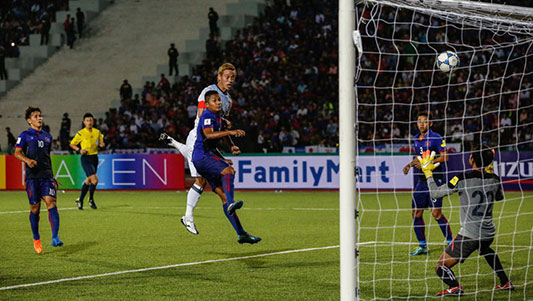 Despite hopes of a good result being relatively low going into the match—Cambodia had lost all six of their World Cup qualifiers—the stadium was buzzing before kick- off, with a large contingent of Japanese fans banging drums and chanting as the likes of Keisuke Honda warmed up on the pitch.

Come kickoff, Cambodia set up in a predictably, albeit necessary, defensive fashion, sitting back while Japan passed the ball around with relative ease, probing the home side’s penalty box.

However, in contrast to all of Cambodia’s previous qualifying matches, they soon gained a foothold in the game as striker Khuon Laboravy began making problems for the Japan defenders.

The striker should have scored in the 22nd minute after beating Maya Yoshida for pace, but could only find the side netting. As the first half went on, the Cambodian side began playing with confidence, pressing their opponents into making mistakes and winning 50-50 balls. At times in the first 45 minutes, it was difficult to tell which side was ranked 183 and which was 50 in the FIFA World Rankings.

Cambodia went into halftime 0-0 with Hiroki Fujiharu hitting the inside of the post in the final minute.

The second half was a different story, however, as Japan asserted themselves over the home side.

The biggest roar of the night took place just after the break as Um Sereyroth saved a penalty from Shinji Okazaki. This was soon followed by the game’s opening goal as Laboravy put the ball into his own net from a curling Yosuke Kashiwagi free kick.

After the introduction of AC Milan playmaker Honda, the Japanese continued to pressure the Cambodian defense and, if it were not for some heroics from Sereyroth in goal, the damage could have been heavier.

The introduction of fan favorite and C-League top scorer Chan Vathanaka gave the home crowd brief hope of a comeback, but a Honda header into the back of the net in the dying minutes put those dreams to bed.

Phat Phearum, 23, a student from Battambang province who watched the game, said he was proud of his team but skeptical as to how hard Japan was trying.

“Even though we lost I’m still happy. If we compare ourselves to Japan, our level is much lower. Although Japan seemed to not really try their best. If they’d tried their best maybe we could have lost by three or four,” he said.

Cambodia’s next and final World Cup qualifier is against Syria in March.