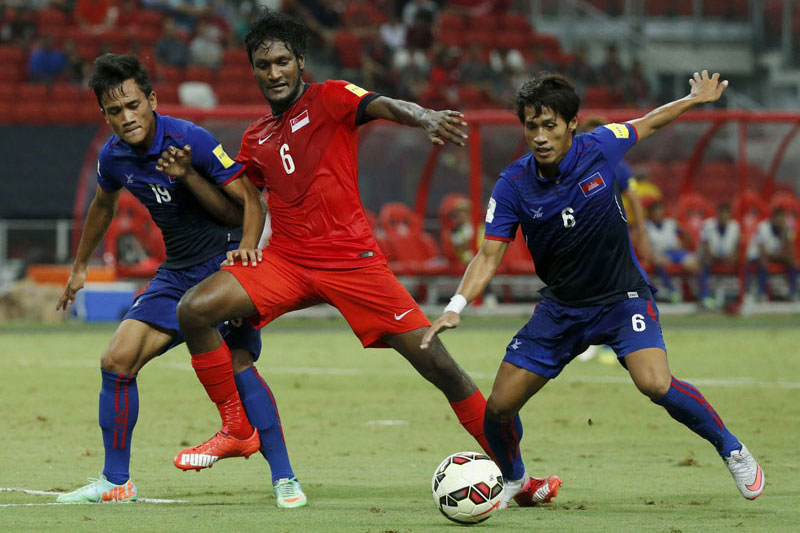 While Cambodia’s qualifying run for the 2018 football World Cup in Russia remains winless, yesterday’s spirited 1-2 away match against Singapore produced Cambodia’s first goal of the campaign.

With 29 spots separating Cambodia from Singapore in the FIFA world rankings, Tuesday’s match was a vastly improved performance from the last time the two teams played in June, when Singapore won 4-0 in front of a packed crowd in Phnom Penh.

Cambodia’s coach Lee Tao-hoon admitted during the pre-match press conference on Monday that he was concerned about his team’s ability to defend against Singapore’s dangerous set pieces, and that Cambodia would be seeking a draw.

This fear was borne out with Singapore’s first goal—along with numerous dangerous attempts—highlighting Cambodia’s aerial weakness in defense. Yet Cambodia showed its own moments of attacking flair throughout the match.

By reverting to the resolutely defensive strategy which saw Cambodia play to a respectable 0-3 loss against Japan in Toyko last month, Mr. Lee was clearly hoping to avoid the embarrassing 0-6 loss suffered when Cambodia attempted to play a more attacking game against Syria in Phnom Penh the following week.

Singapore entered the match last night, held in front of a partially filled National Stadium crowd, sitting third in Group E, knowing that a win against Cambodia would keep alive their qualification chances.

While Cambodia started the match in a defensive mode, it didn’t take long for them to break forward, however this only produced a Singapore counterattack, culminating in Faris Ramli’s stinging shot inching just wide of the right post around the 10 minute mark.

Singapore continued to show their danger from set pieces, with Shakir Hamzah heading just over the bar from a corner kick at around 30 minutes.

Both sides traded possession before sustained Singaporean pressure resulted in a penalty at 41 minutes after defender Nub Tola blocked a shot on goal with his arm, earning him a yellow card.

Khairul Amri’s subsequent penalty shot, low to the right, was stopped by Sereyroth, keeping Cambodia in the match.

After halftime, Singapore came out guns blazing, barely leaving the Cambodian half for the first 10 minutes and earning an early second goal after some sloppy defending by Nhim Sovannara, who allowed Fazrul Nawaz to poach a weak pass back to the goalkeeper and fire a curling shot into the top right-hand corner.

Following another set piece at 53 minutes, Sereyroth produced another fantastic save to deny Singapore their third goal of the evening.

At 66 minutes, Cambodia scored their first goal of this World Cup qualifying campaign, with Sos Suhana finding the net after receiving a pass into the 6-yard box from Chan Vathanaka, following a darting run into the box.

The remainder of the match produced chances for both sides, but the score stood at 2-1.

The final three matches for Cambodia in the second round of the Asian group qualifiers are against Afghanistan on November 12 in Iran, Japan on November 17 at home in Phnom Penh and on March 24 in Iran against Syria.