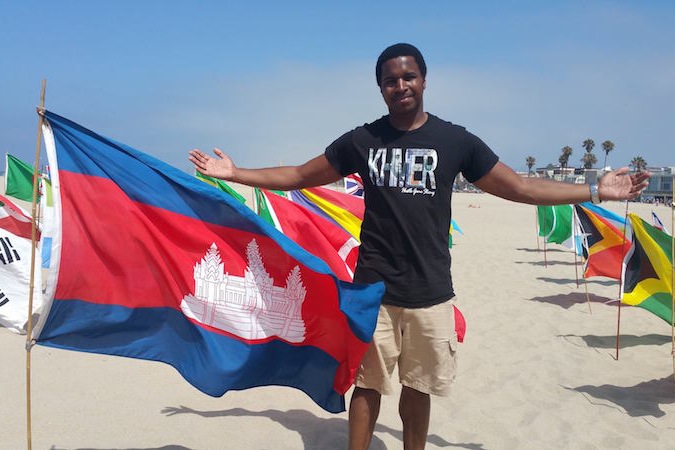 On a clear August day in Burbank, California, a 31-year-old man tucked in his shirt and began speaking Khmer.

“Jen-nay,” says Christopher Cravens, in a video he posted to his Facebook page, imitating the title character from the 1994 hit film “Forrest Gump.”

“Bong srolanh oun,” he says with the protagonist’s Mississippi drawl, as subtitles flash “I love you.”

The video then cuts to a shot of Mr. Cravens—better known to his fans as C. Crave—with a Cambodian krama draped around his tapered afro.

In the wrong hands, such a cultural medley—a black man from California mimicking whites from the Deep South while speaking Khmer—could flop.

But with more than 50,000 Facebook followers and thousands more on Instagram, C. Crave is feeling the love that Jenny lacks. Fans from Adelaide to Phnom Penh flock to watch Mr. Cravens’ raps, skits, monologues and memes that mine influences spanning cultures and continents.

In the process, C. Crave has emerged as an unlikely champion of a Cambodian-American community that seems to have returned his big-grinned embrace.

“It’s exactly what I’ve experienced from day one with Khmer culture: the hospitality, the love,” Mr. Cravens said in an interview earlier this month.

That’s not to say C. Crave and Cambodian-Americans have always got along perfectly. Mr. Cravens was first introduced to the Cambodian community at the age of 5, when his family was evicted from its home on the south side of Stockton, California, a struggling city about 150 km east of San Francisco.

They moved into an apartment complex in a mostly Cambodian enclave on the north side of the city alongside the families of Khmer Rouge-era refugees.

“We didn’t start off as friends when I moved into the complex,” he remembers. But after a few years, Mr. Cravens and his neighbors warmed to each other.

“Once we put race aside, we became like a family,” he said. “All the way through when I left Stockton, I was with my Khmer folks.”

Once Mr. Cravens ingratiated himself with a family of eight boys and their father, the idea of family became more literal.

“It started out as friendship, but it didn’t take long for them to be like, that’s my brother,” he said.

There were family dinners, high school dances, and games of “cops and robbers” in the street, as well as a Cambodian game similar to hide-and-seek called “bet poun.”

Mr. Cravens began to pick up the Khmer language and read up on the Cambodian history he’d heard firsthand from some of the community’s refugees. He became entranced with the Khmer Empire and Angkor Wat, which he aims to see when he travels to Cambodia for the first time later this year.

“Anybody who doesn’t go and visit—they should be slapped in the face,” he said with a laugh.

Eventually Mr. Cravens felt “more embedded in the Khmer world” than in the African-American community.

But Stockton’s seedier side also pushed him out of a city that as recently as 2012 boasted the fifth-highest violent crime rates in the country, according to the U.S. FBI.

He joined the Navy and became a sonar technician stationed at bases in Seattle, San Diego and Norfolk, Virginia, dabbling in rap and music production in his free time.

In 2009, he finished his service and moved to Los Angeles to pick up a degree at California State University at Northridge in business marketing, and pursue his music career “full throttle.”

But it wasn’t until July last year that Mr. Cravens found his niche when he posted a “pretty potty-mouthed freestyle” Khmer rap to social media.

The clip went viral and set the entertainer on a new course.

My singing voice is phenomenal. By the way… you're welcome. ? #ccraveskits #Ccraveisforever

“When that worked for me, I said, ‘maybe this is what I’m supposed to do.’”

“Every city I touched down in, it was like I knew them immediately,” he said.

Cambodian-American fans like Mony Ty, a chef in Brooklyn, relish C. Crave’s celebration of a culture that was sometimes sidelined by assimilation.

“Some kids, including myself, didn’t make too much of an effort to keep the culture, or practice the language,” Mr. Ty wrote in a Facebook message.

“It’s nice to see that someone of another culture, recognizes the beauty and value of something that we never thought too much about. It’s touching, and heartwarming.”

The rapper “has made me think about the value of heritage,” he said.

Such goodwill has prompted Mr. Cravens to plan a visit to Cambodia in December, to buy and distribute aid supplies, meet fans and friends, and make smartphone videos along the way.

“There’s so much more out there than the world I know,” he said. “I expect my eyes to be opened.”

In many of his video clips, Mr. Cravens speaks directly to the camera, sharing hopes, stories or tidbits from the day. It’s the kind of celebrity the internet has birthed and nurtured, but it doesn’t leave much time for sleep.

Between 10-hour shifts as a manager at a battery recycling plant, Mr. Cravens promotes cultural events, spends time in the studio to advance his rap career, and regularly posts original content to his Facebook and Instagram accounts.

“That’s why C. Crave is forever,” he said, reciting a catchphrase he’s turned into a signature social media hashtag. “I thought of what I’m doing on the daily—you gotta keep going, you gotta be forever.”

Though Mr. Cravens has put out a series of slickly produced rap videos, fans seem to respond most enthusiastically when he’s channeling his goofier side: riffing on cleaning (“picking up shit —not literally shit, really just shoes and a couple of shirts,” he sings as he cleans), experimenting with a prahok and jelly sandwich (“not the business,” he later decided) and posting a photo of himself sitting cross-legged on a kitchen floor with a mortar and pestle (“If the bok lahong ain’t spicy then I don’t want it.”)

Mr. Cravens hopes to branch out from his Khmer-language niche and incorporate other Asian languages—Lao, Thai, Vietnamese—into his repertoire, to grow his audience and spread a message of openness and love.

He also hopes that his videos will bring goodwill to African-Americans, who, like Cambodian-Americans, have a history of “slavery and genocide,” but are able to “push past and celebrate with soul.”

That spirit is alive even in the most unscripted of C. Crave’s clips, like one shot after a long night out in Las Vegas.

“It’s not even night anymore; it’s morning time,” he says into the camera. “The sun—I see the sun over there.”

He smiles at his phone. “But that’s cool because C. Crave is forever.”