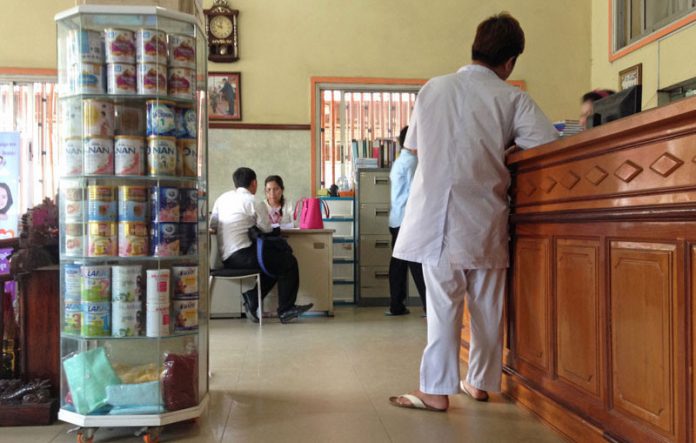 Baby formula companies are pushing their products in clinics and on health care professionals—some with great effect—despite a government ban on such acts and extensive research showing that formula is an inferior alternative to mother’s milk.

Staff at maternity clinics in Phnom Penh say they receive routine promotional visits from representatives, are left with free products to pass on to mothers and have even been offered rewards for introducing certain brands to them.

Under the government’s 2005 sub-decree to regulate the marketing of breast milk substitutes, formula companies are forbidden from promoting, donating or distributing milk formula in health centers or to health workers. Distributing promotional material of any kind is also outlawed.

“In Cambodia, we cannot follow the law 100 percent because we have to serve our customers’ demands,” said a supervisor at one maternity clinic, who spoke on condition of anonymity because her clinic was violating the sub-decree.

“The customers, they demand the formula milk. If we don’t give it to them they will complain that we offer poor services, go somewhere else and then we will have no customers,” she said.

Inside this private clinic, a glass cabinet holds no less than 10 different brands of breast milk substitutes, including Nestle, Dumex, Celia and Star Gold, with its “five-star plan” for developing the brain, immunity, growth, digestion and safety. Each can of formula came as a free gift from visiting company representatives.

“When there is a newborn, we give one free can to the mother, and if the baby likes it and she wants more, they contact the company. When we give one product a lot, the company will sponsor us with gifts,” the supervisor said, adding that Dumex had sent her on an all-expenses-paid four-day trip to Singapore and Malaysia.

“This is how they encourage [us],” she said.

Last week, New Zealand brand Bibere came under fire when a baby formula watchdog revealed that its Cambodia distributor, Nutrilatt Master, was using a Facebook page to promote its product, including by posting a picture of formula being handed over to new parents inside a hospital.

The International Baby Food Action Network, which highlights violations of the World Health Organization’s International Code of Marketing Breast Milk Substitutes—created in the 1970s after Nestle was accused of creating a market for baby formula by aggressively promoting its product to uneducated mothers in third-world countries—said that it was “appalled” by Bibere/Nutrilatt’s tactics.

Contacted and told that his company was breaching the government’s edict, Tim Sovannara, the managing director of Nutrilatt, said that he did not do promotions in hospitals and classified the in-hospital donation caught on camera as “giving a gift to a friend.”

Pressed further, Mr. Sovannara pointed the finger at the rest of the companies in Phnom Penh’s crowded milk substitute market.

“Others give products for free to hospitals. You should go and ask every one of them,” he said, before hanging up.

Standing in front of a 2015 calendar bearing the logo of Abbott Nutrition, which produces the popular formula Similac, Soeung Voleak, a receptionist at the clinic, said that she had to regularly turn formula representatives away from the Sorphear Maternity clinic where she works.

Similac and Dumex, she said, visit every month and ask staff to pass free samples to mothers with newborn babies.

“We reject them because the ministry does not allow it,” Ms. Voleak said.

Ms. Voleak said that medical staff at the hospital make it very clear to new mothers that natural milk holds antibodies that are vital to building the immune system and fighting disease, and which can not be provided by supplements. However, one former patient said that while she was offered this information, she still had formula brought to her hospital bed.

In April, Soum Savdey gave birth to her first child at the Sorphear Maternity clinic. The same day, a woman arrived with a free sample.

“I can’t remember the company name, but my husband did not trust her and had already bought a good brand,” said Ms. Savdey, 28. “So he rejected her and we used the one we already had.”

Ms. Savdey said that her intention was to feed substitute milk for just three days while recovering from a cesarean section, but after that initial period, her 4-day old baby rejected the natural milk.

“I tried to give her my milk but she didn’t like it,” she said. “She spat it out every time, so I had to go back to the powder.”

Touch Kimleang, who gave birth to a baby boy at Chetra Clinic and Maternity in July, has a similar story. While she recovered from a cesarean section, her son was put on formula for the first few days.

Ms. Kimleang, 21, said that she planned to raise her boy on a mix of natural milk and formula, but that once he had tasted the substitute, the original did not satisfy him.

“Maybe it has a different taste,” she said. “When he drank the breast milk, he always cried. So I cut it, and now he just drinks formula.”

Despite some of them openly pushing formula on their patients, every health worker spoken to was well aware of the benefits of mother’s milk over substitutes.

None was a better example of the contradictions of baby-formula promotion than Hong Samidy, who works at a clinic and has a 3-month-old baby boy of her own.

Ms. Samidy, a nurse at Sokret Polyclinic and Maternity, instructs all new mothers to feed their babies natural milk initially so that the infant sees that as the norm. At the same time, however, she hands over free formula samples to every patient.

“I understand [the health implications], but it is for our reputation. We get more customers for giving free formula,” she said.

Ms. Samidy said that she started her own son on breast milk, but was forced to leave her son in the hands of her sister-in-law and feed him canned formula when she returned to work last month. Now he rejects breast milk.

“If the baby agreed with natural milk, yes, of course, I would feed it all the time,” she said.

“But once the baby gets used to the bottle, they will only use the bottle. They won’t take natural milk.”

Correction: A previous version of this article stated that Soeung Voleak is a nurse at  Sorphear Maternity clinic. She is a receptionist.