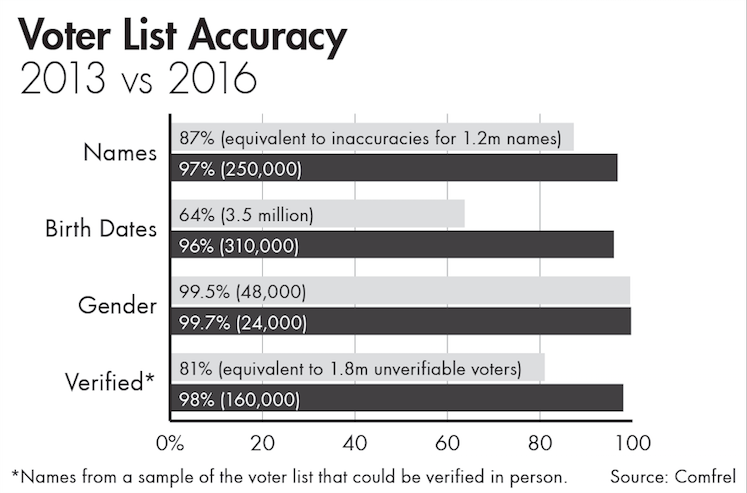 Rectifying one of the greatest sources of outrage and discontent surrounding previous elections, the voter list compiled for upcoming commune elections has passed an audit with flying colors, though commentators remain skeptical as to whether the country will actually witness free and fair elections on June 4.

The Committee for Free and Fair Elections in Cambodia (Comfrel) on Tuesday published its full report on the completely remade voter list, following the NGO coalition’s release of a summary at a news conference last week.

“This audit found that there are significant improvements on the quality of the 2016 voter list in its completeness, currency, and accuracy compared with the previous voter list,” Comfrel’s report says.

Comfrel verified names on the registration list by tracking down actual voters. It surveyed 2,690 voters around the country to check their details against what had been recorded on the new electoral rolls.

Ninety-eight percent of the names randomly selected from the new digitized voter list were found to be legitimate, compared to just 81 percent on the previous list, the report says.

A 2013 audit by two other election NGOs found that only 87.3 percent of names were recorded properly in the previous list, while date of birth was recorded accurately just 63.7 percent of the time.

“It is notable that voter registration data was captured with a high degree of accuracy with more than 95 percent in each case,” Comfrel’s report says.

The list—which had previously been compiled by hand—was entirely redone last year after reported irregularities sparked massive protests in Phnom Penh in the wake of the disputed 2013 national election, which the opposition CNRP has claimed it narrowly lost to the CPP amid voter fraud.

According to a 2013 report by Comfrel into that year’s national elections, as many as 1.25 million voters were disenfranchised due to irregularities in the voter list. Some voters complained of incorrectly recorded details, while election observers also cited “ghost voters,” whose names had been duplicated or could not be verified at all.

Following a standoff between the CNRP and CPP after the vote, election laws were amended and a new elections body formed. The National Election Committee (NEC) has four members appointed from each party, as well as a bipartisan ninth member.

The registration process was also given a substantial upgrade and transitioned from paper to digital. Cambodians registered their details with NEC officials, rather than commune police officers, this time around.

Comfrel senior program coordinator Kim Chhorn said the positive survey results were due to a modernized registration process, which was digitized with the backing of Japan and the E.U.

Compared to the old list, “very few mistakes” were found, he said. “Last time, many people complained about the registration.”

“No duplicate names exist. The list is accurate, because of electronic biometric registration,” he said. “It is better than the previous ones.”

Mr. Puthea said his biggest concern about the upcoming June commune elections was whether people would have the required documents for voting on Election Day.

“We are worried that some people who lose their IDs and do not ask for confirmation of their IDs…will not be allowed to vote,” he said.

CPP spokesman Sok Eysan said the voter list was as good as anyone could have hoped.

“This showcases that NEC has done a good job. It is NEC’s success. I think 98 percent is considered as perfect,” Mr. Eysan said. “We have more accuracy than the previous ones thanks to advanced technology.”

Political analyst Cham Bunthet, who is an adviser to the opposition Grassroots Democracy Party, said it was still hard to believe Cambodia would actually witness free and fair elections, considering its history.

“Actually, the election in Cambodia has never been free and fair, maybe since 1993,” Mr. Bunthet said, referring to the country’s first elections following decades of war that were set up by the U.N.

“We’re not that lucky in Cambodia for the last three or four other elections…. I don’t expect we will have free and fair elections in 2017 or 2018.”

Mr. Bunthet said the voter list may no longer be an issue, but that was not enough.

“In order to compete fairly, you need to have a free environment where you can advocate freely, appeal to voters, and voters can hear the voices of parties, and there’s no potential threat, blocking or pressuring [parties] over particular issues.”

Even with a pristine voter list, the ruling CPP likely had tricks left up its sleeve to turn the elections in its favor, Mr. Bunthet said.